Agriculture in India: Are Women Benefiting?

Women’s economic and social development will not be achieved if the problems confronted by women in agriculture are not addressed. Understanding existing gender roles and relations in land and livestock management is critical for informing gender equitable policies, maximising the productive potential of women and ensuring their economic empowerment, says N C Saxena 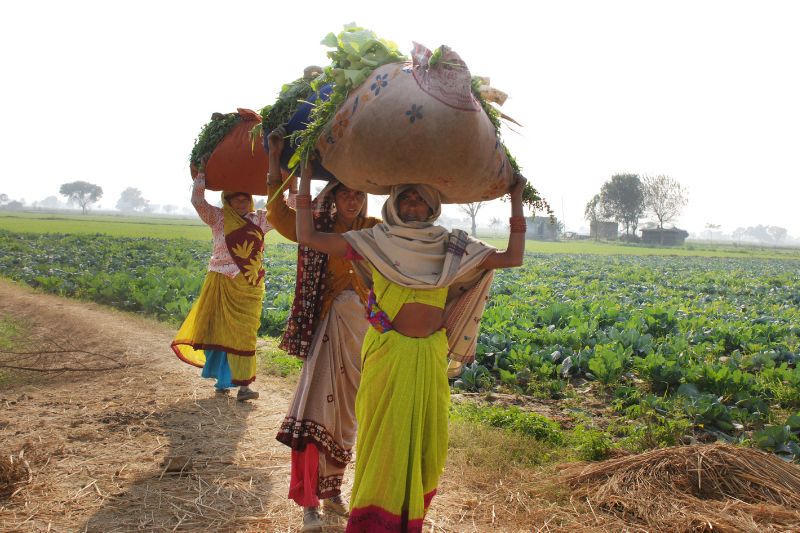 Despite India’s remarkable economic growth over the past two decades, the progress in achieving gender equality and women’s empowerment has been unsatisfactory. The ratio of females to males in 2011 for the age group 0-6 is 914 to 1000, which is the lowest since 1947. The literacy rate among females age 7 and above has certainly increased from 54 per cent in 2001 to 65 per cent in 2011, but it is still 17 points less than men. Gender inequalities are reflected in the country’s human development ranking – India ranks 113 of 157 countries in the Gender-related Development Index. More than 90 per cent of women continue to struggle in the informal/unorganised sector with no legislative safeguards.

The prevailing social constraints of patriarchy largely relegates women to the “inside sphere”. Added to this are the dual responsibilities of women tagged with heavy work responsibilities in agriculture, animal husbandry and other traditional sectors which create a syndrome of gender stereotypes, marginalisation, alienation and deprivation of women in the informal sector. Even when their hard work produces surplus, they do not generally control its disposal, which has traditionally been and continues to be in the men’s domain.

Seventy-nine per cent of rural female workers are still in agriculture, a sector which is stagnating and has done very poorly in the last fifteen years. Despite women’s vital contribution to agriculture and allied sectors in India, they lack control over productive assets (land, livestock, fisheries, technologies, credit, finance, markets, etc.), face biases due to socio-cultural practices, and experience gender differentials in agricultural wages and decisions concerning crop management and marketing. Women’s economic and social development will not be achieved if the problems confronted by women in agriculture are not addressed. It is imperative to understand existing gender roles and relations in land and livestock management as well as constraints faced by women. This is critical for informing gender equitable policies, maximising the productive potential of women and ensuring their economic empowerment.

While women in India have always worked harder than men, their role as workers has not been fully recognised by planners and policy makers. According to the 66th Round NSSO (National Sample Survey Organisation) survey, the Work Participation Rate for the age group 15-59 years at the all-India level in 2009-10 was only 26 per cent for females and 84 per cent for males. The rate has been consistently going down for women since 1983.

While there was an absolute increase in the number of male labour force both in urban and rural areas, women workers show a different trend. Their number shows a significant decline during 2004-09. There seems to be under-counting of women’s work on a massive scale in Indian statistics.

The reasons for the under-reporting of women as workers are many: women’s work is often informal, unpaid and home-based; it is flexible, non-standard and an extension of domestic work and therefore frequently indistinguishable from it. Woman typically work 16 hours per day on both paid and unpaid labour; most women have no leisure time. Women as a whole are perceived as housewives, and their work in agriculture both as cultivators and agricultural labourers is not fully quantified. Greater gender sensitivity is needed to correctly appreciate and record the productive nature of women’s work.

Besides under-counting, there could be two other explanations for the fall in the number of women workers in the last five years. First, the number of women students in the age group 15-25 has increased and therefore they are not in the labour market. Secondly, as prosperity has increased, there is a tendency in Indian households to withdraw women from work outside their homes. According to the traditional Indian mindset, a household in which females don’t perform manual work outside their homes has a higher status than one in which females do. Poor females work because they have no choice. But as the family income rises, they are withdrawn from paid work. Women may be disinclined to participate in market work in rural India because of family status concerns in a culture that stigmatises market work by married women. The ratio of women’s market work to men’s declines as we move up the caste hierarchy.

The number of women workers shows a significant decline during 2004-09. There seems to be under-counting of women’s work on a massive scale in Indian statistics

Despite under-estimation and thus an increasing dependency ratio, the NSSO data show two other trends as regards women’s role in agriculture. Firstly, of those rural women who were classified as workers, a greater proportion worked in agriculture when compared with men; comparatively fewer women workers were in the more productive non-farm sector. Secondly, women’s share in the total number of agricultural workers is increasing over time, leading to their increased involvement in agriculture. As men migrate to urban areas and to non-farm sectors in response to both the distress in agriculture and better job opportunities elsewhere, women’s responsibility both as workers and as farm managers has grown, leading to increased feminisation of agriculture.

Ownership of land is concentrated mostly in male hands in our patriarchal society. It has been estimated that in India land ownership in favour of women is not more than 2 per cent. Lack of entitlement to land (and other assets such as house, livestock, and so on) is a severe impediment to efficiency in agriculture for women cultivators because in the absence of title women cannot get credit or be entitled to irrigation and other inputs, especially technology. Women working on land without title has led to the creation of a new form of zamindari (landlordism), as their operation is divorced from ownership. It may be recalled that zamindari was abolished some sixty years ago on considerations of both efficiency and equity. The discrepancy between ownership and operation of land was regarded as one of the basic maladies of the agrarian structure that acted as a “built-in-depressor”. It led not only to inefficient utilisation of given scarce resources but also stood in the way of augmenting those resources. Thus, in every state the policy of abolishing all intermediary interests and giving ownership to the actual operator was adopted soon after independence. The time is now ripe to do so for women farmers.

In addition to improved production, the clinching argument in favour of land titles to women is the stability and security it provides, the protection it affords from marital violence, and the bargaining power it gives women in household decision making and in the labour market for wages. Without title to land, women are not recognised, even by the state, as clients for extension services or as candidates for membership in institutions such as co-operative societies.

Even though the legal framework has been amended in favour of women as recently as 2005 with the deletion of the gender discriminatory clause on agricultural land in the Hindu Succession Act, women often forgo their claims in anticipation of support from their natal family in case of marital problems or their marriages breaking up, even though such support may not actually materialise. Women face impediments in operationalising the statutory codes and getting their names included in the records. Further, ownership does not always translate into control, as is the experience of matrilineal societies of Meghalaya where control is exercised by the maternal uncle. Even when women have mutations of land in their name, they may not have actual control over that land. Decision making in cropping patterns, sale, mortgage and purchase of land or the instruments of production remains in the hands of the men of the household.

Thus the issue is not merely legal, it is also cultural. As women’s control over loans, income and assets goes down, their access to social resources such as knowledge, power and prestige diminishes. Disparity in gender status gets intensified with the emergence and deepening of other forms of stratification. Subordination and seclusion of women is more noticeable in communities where social differentiation and hierarchy based on ownership patterns or on prestige is more pronounced.

Land ownership in favour of women is not more than 2 per cent. Women working on land without title has led to the creation of a new form of zamindari

Rural women may be aware of the necessity of getting separate legal rights over land, but they lack the wherewithal to claim their rights through the tedious and harassing process of approaching bureaucracy and the courts. They are exploited by their husbands and even by their sons but they would never consider challenging them. They generally like to view their husbands as comrades and friends whose good wishes and advice they like to cherish. They keep fasts for their husbands’ long life, and aspire to die a suhagan (as a married woman, before their husband’s passing). They divide men into the neat categories of good husbands and bad husbands, without realising the inherent exploitation in the very institution of patriarchy and property customs. These norms serve as barriers to women’s ability to exercise direct control over the land they may inherit in their natal village. Thus, along with initiating legal rights over land to women one would have to conscientise them about the existing realities of power inequities within the family, which would require a great deal of political courage.

Asset redistribution is superior to income redistribution. It provides a basis for overcoming distortions in the functioning of markets and for restructuring gender relations in the fields of property rights, access to technology, healthcare and governance. Asset ownership and control rights are preferable to numerous policy alternatives for women’s empowerment. These are likely to bring in changes in public opinion about gender roles and socio-cultural norms of deep-seated social inequalities of women such as household division of labour, restraints on women speaking in public, constraints on women’s mobility and pervasive gender-based violence within the home and outside.