Agricultural growth on a year-on-year basis is critical for both food security and inclusiveness of growth. The Eleventh Plan target fell short by 25 per cent and the Twelfth Plan aims not only to attain the target but also cover lost ground. N A Mujumdar debates how to go about achieving this

By N A Mujumdar 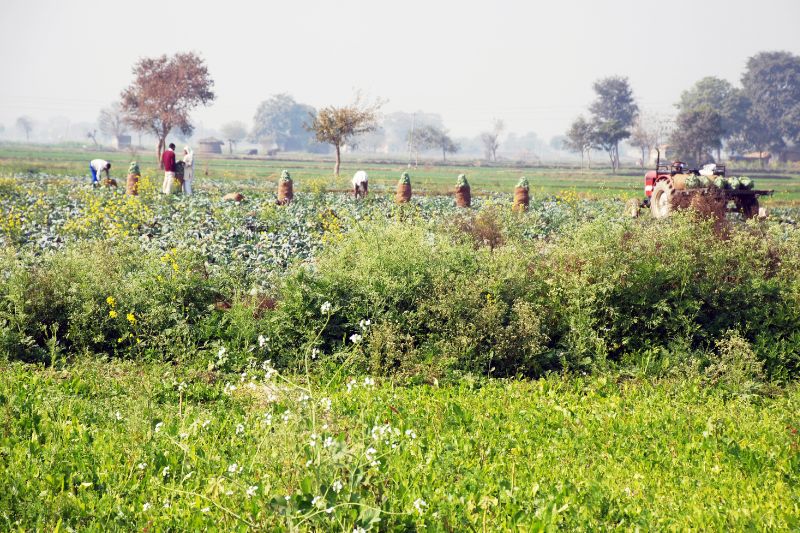 It has become fashionable to harp on the theme that a second Green Revolution can alone ensure food security. Hence our policy-makers’ high profile initiatives – the India–US collaboration on agricultural technology. The Joint Statement of Prime Minister Manmohan Singh and President Barack Obama, issued on 8 November 2010 at the end of the latter’s visit to India, mentions the decision “to work together to develop, test, and replicate transformative technologies to extend food security, as part of the Evergreen Revolution.”

The first Green Revolution was achieved through a genetic breakthrough in seed technology, a technology which was accessible to all. A number of inventions of high-yielding varieties of seeds took place under the auspices of publicly-funded research institutions. But today the intellectual property rights of genetically modified (GM) seeds are held by the Monsantos, Duponts and Dows. These are purely agribusiness corporates aiming at maximising their profits.

In this article I argue that there are more mundane and less glamorous alternatives to attaining food and nutrition security. One does not have to look to the US to increase the levels of yields of our crops. Under the existing farming system, current level of farm technology and farm management practices, it is feasible to raise farm productivity levels. The gap between the yields in our agriculture research centres at the state level and at actual farm level is quite wide. For example, in the case of wheat it is 84 per cent for Madhya Pradesh; for rice, over 100 per cent for Assam, Bihar, Chhattisgarh and Uttar Pradesh; for soyabean, 185 per cent in Karnataka, and for sugarcane it is 167 per cent in Madhya Pradesh. Hence if we can bridge these yield gaps, we can increase production by 50 per cent. In other words, by appropriate policy thrusts, we can usher in a home-grown Second Green Revolution.

At present, there is a surfeit of scholarship on agricultural development modalities at the macro level discourses. But these are not being translated into success stories at the ground level because there seems to be a disconnect between macro level discourses and their implementation at the ground level. Such disconnect is due to what one might call “commitment deficit” on the part of both policy-makers and development administration This point can be substantiated with the most conspicuous example of watershed development.

Future agricultural growth will have to be necessarily water-centric and what better alternative can there be than watershed development? I regard it as the mother of all water management modes. It should have been accorded the same priority as nuclear power. Watershed development projects, both micro and macro, hold out great promise for future agricultural growth. The potential area to be covered is huge, with about 60 per cent of the area under crops being rain fed. Capital investment is modest, the projects are labour intensive and do not require much technical know-how. By its very nature, growth under watershed development is “inclusive”.

Yet, why despite all the sound and fury, have we not made any appreciable progress? For instance, the Macro Management of Agriculture (MMA) assistance during 2010-11 has been used to treat a mere 300,000 hectares of land under the National Water Development Project for Rainfed Areas (NWDPRA).

In fact watershed development programmes have a fairly long history. It was in 1986 that NWDPRA was introduced in 99 districts in 16 states. What has happened in the subsequent quarter century? The Government of India issued in 2008 “The Common Guidelines for Watershed Development Projects”, the first set of guidelines that apply to watershed development projects across three ministries – Ministry of Rural Development, Ministry of Agriculture and Ministry of Environment and Forests. Trust the bureaucracy to mystify, sometimes with a little help from academicians, a perfectly simple and workable growth tool! We have had scholarly discourses on watershed development like the Parthasarathy Committee Report. But where are the results? Even in a progressive state like Maharashtra, the proportion of area covered by micro watershed development to the total eligible area is not significant.

It is necessary to demystify the whole approach to watershed development. Considering the humble animal – watershed development – the punditry and complexity of the “guidelines” mentioned above is astounding. In contrast, look at the success stories of individual initiatives. In Maharashtra, Anna Hazare’s Ralegaon Siddhi project has now become part of folklore of watershed movement. A more recent case is that of Hirwe Bazar, a droughtprone, poverty-stricken village about 100 kilometres from Pune. The efforts of one man, Popatrao Pawar, have converted this village into a model village. The International Groundwater Association has given this village the International Groundwater Management Award. Neither Hazare nor Pawar could have read and appreciated the erudition and comprehensiveness of the “guidelines” referred to above. Yet they were able to evolve their own region- and location-specific models and emerge as the new Schumpeterian heroes of agricultural growth and rural development. There may be similar leaders in Gujarat, Rajasthan and elsewhere. It may be useful to produce the growth profiles of these successful stories so that we may be able to replicate them on a large scale.

The mid-term appraisals of plans of relevant states should have contained a separate section on the progress of watershed development projects. Alas, this is not so. All this shows “commitment deficit” on the part of policy-makers and the development administration.

Rural development is a much wider concept than agricultural development. It involves education, health and nutrition of the rural population. It also involves development of allied activities, livestock, horticulture and so on.

In a book the former President of India A P J Abdul Kalam seeks to evolve a sustainable development system of Provision of Urban Amenities in Rural Areas (PURA) by harnessing the potential energies of the rural masses. PURA is an amalgam of technologies and people – their traditional skills and entrepreneurial spirit aimed at achieving sustainable development, which is financially viable, socially equitable and eco-friendly.

This is not a learned discourse on development models or development theory. But the insights provided by the discussion in the book do enlighten us on how to facilitate blooming of thousands of flowers with the help of leadership at the ground level.

Let us begin with irrigation in the desert, Pokhran is deep in the Thar desert in Western India. President Kalam was returning after conducting the nuclear test and on the way stopped at Bhadariya, a small village in the middle of the desert. Baba Sri Bhadariya Maharaja’s ashram has done wonders for the community here. The villagers suffered problems of poverty, hunger, health care and malnutrition. Water was very scarce. With the cooperation and support of the villagers, the ashram executed a mission of greening the area and planted hundreds of thousands of trees. Tubewells were dug and agriculture was initiated, with special steps taken to conserve water. The villagers started providing fodder to the ashram’s approximately 1000 cows. In turn, the ashram offers free milk and butter to the needy. Thus Bhadariya and some surrounding 70 villages have become resurgent.

For ensuring food security we do not require “imported” farm technology. If we have not made significant progress in accelerating agricultural growth, it is because our policy-makers and development administration have not paid adequate attention to critical projects like watershed development

Take the case of Bihar, a relatively backward state. An experiment carried out by the Technology Information Forecasting and Assessment Council (TIFAC) demonstrated that the yield of paddy could be increased from 2 tonnes per hectare to 5.8 tonnes and that of wheat from 0.9 tonnes per hectare to 2.6 tonnes. Addressing the Bihar Assembly in March 2006 President Kalam requested them to adopt this system-oriented approach in all the 38 districts of Bihar so that the state could triple its paddy and wheat crops.

M R Raju, a well-known nuclear scientist working in America, has set up the Mahatma Gandhi Memorial Medical Trust in his native village, Pada Amiram, in Andhra Pradesh. Within a decade this has brought about a great change in the lives of the people. The trust focuses on the upliftment of children in the age group of 3 to 5 years. This has brought down the drop-out rate of children in schools from 70 per cent to less than 30 per cent.

In the area of dairying, we generally read about the success story of Anand. There is equally the account of Warana Milk Cooperative in Kolhapur district. The cooperative has about 20,000 milk producers, and cover a sugar factory, banking and retail services. The cooperative has brought about all-round development of the area.

President Kalam’s total dedication to rural development is well known. When he was President, he invited 6,000 farmers from all over the country to Rashtrapati Bhavan on 23 March 2007. The farmers were shown the Herbal Garden which includes Jatropha, a diesel producing plant, the Spiritual Garden, the Nutrition Garden and the Bio-diversity Park. The farmers were shown organic farming and the commercial aspects of various plants and herbs were outlined by experts from leading agricultural universities. This is perhaps a rare case of a president playing the role of an extension agency! How we wish that other leaders – political, religious, intellectual – would show the same degree of involvement in development. That is the best method of promoting a resurgent India!

It is not as if innovative and progressive farming practices have not been adopted by farmers. The National Innovation Foundation (NIF) has compiled data and information on these practices. Areas with poor rainfall or where the land remains flooded for long periods of time, mountainous regions and forest areas are the most suitable for organic food farming. The NIF has reported over 240 combinations of herbal pesticides being used in different parts of the country. There are many cost-effective solutions found by farmers. For instance, planting lady’s fingers (bhindi) as a border crop prevents cotton crops being attacked by pests (the pests are attracted to the flowers of the lady’s fingers, leaving the cotton crop to grow well). This is an important zero-cost solution since 40 per cent of the pesticides in use in this country are for protecting cotton crops. In one district, 2,400 farmers joined together to cultivate organic paddy in 2,500 acres of wetland in their Panchayat area and they realized a productivity of 6.25 tonnes per hectare, which is at par with international standards.

We do not to look for “imported” farm technology. If we have not made significant progress in accelerating agricultural growth it is because our policy-makers and development administration have not paid adequate attention to critical projects like watershed development, which is not a glamorous undertaking. We must begin to “dirty” our hands with these mundane projects. The Reserve Bank of India’s Report on Trend and Progress of Banking in India, 2010-11, exhorts bankers to “think global but act local”. This should be our mantra for agricultural and rural development. Secondly, rural development extends far beyond agricultural development. This is where “let a thousands flowers bloom” approach seems to be appropriate. There are several Schumpeterian heroes who have emerged in the rural sector demonstrating what can be achieved in different fields. Effectively incorporating several innovations, including the zero-cost solutions referred to above; into the blue-print of area-specific development plans can bring about a home-grown Green Revolution.