Agriculture: The Land of Lost Opportunities

Indian agriculture plays a unique role in food security, employment creation and poverty alleviation besides providing cheap labor for the industrial and services sectors. Farmers are rapidly becoming impoverished due to price and movement controls. Subsidies attributed to agriculture are misplaced with diesel subsidies, free electricity, and subsidies to fertilizer manufacturers. If farming is so highly subsidised, why are our farmers committing suicide? Are we only paying lip service to developing the agricultural sector, asks K G Karmakar 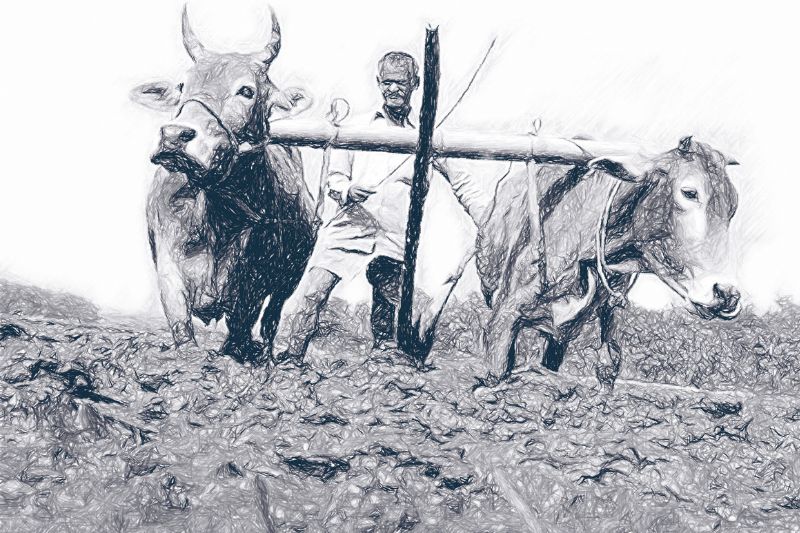 The Indian farmer is born in debt, lives in debt and dies in debt, bequeathing debt to his children. During his life, he lives in the shadows of our minds, an anonymous figure, even though he is the sole custodian of our environment and protector of our bio-diversity. It is his children who join the armed forces, keeping vigil on our borders and our enemies at bay. On his frail shoulders rests the food security of our country. The Green Revolution, the White Revolution, the Blue Revolution, the Yellow Revolution, the Golden Revolution have all been implemented by him. It is his hard work, perseverance and nurturing skills that have made India self-sufficient in food.

The farm sector is the largest private sector in our country and every farmer is an entrepreneur, deserving respect for his farming skills and risk-taking abilities. Yet, a government which swears by a mixed economy continues its ruinous neglect of agriculture at both central and state levels, ensuring poor growth in this critical sector. For the farmer there is neither praise or acknowledgement, nor any inclusive development. Worse, he is mercilessly exploited by all. He is exposed to production risks, weather risks, price risks and without a comprehensive safety net, we expect him to ensure our food security when he is unable to ensure the security and well-being of his own family. No one shares his risks or partners him in his micro-enterprise, except his toiling family members. His is a lonely and essentially a very risky existence. His educated children are loath to take up farming as a career, preferring instead to migrate to ever-growing cities for work and sustenance. Who will feed us in the future?

About 65 per cent of India’s population lives in rural areas and 70 per cent depends on agriculture, primarily rain-fed, for a living. With the industrial sector registering a growth of only 1.5 per cent, the economy is in trouble on many fronts. One bad monsoon can send the entire economy into a downslide. Over the past 10 years, the rain gods have been kind and, barring a few problem areas like Bundelkhand, agriculture has registered an average growth rate of 2.2 per cent, but has fallen well short of the targetted 4.1 per cent. With good monsoons and the laudable efforts of our farmers, we should have done much better in agriculture. Poor planning and a status quo-ist bureaucracy (continued existence of Agriculture Produce Market Committee, sudden bans on exports), short-sighted vision by politicians (lack of pro-farm sector policies), sheer unavailability of infrastructure (particularly godowns and cold storage) and unethical enterprise of traders (spurious seeds, fake fertilisers) have united in exploiting the poor farmer. An entire generation of farmers has been badly under-served by various institutions – bankers, scientists, insurance experts, agricultural universities, research institutes like Indian Council of Agricultural Research (ICAR), and outreach agencies like Krishi Vigyan Kendras (KVKs) and Agriculture Technology Management Agencies (ATMAs). Rural credit bureaus and easier credit access for farmers, remains a pipe dream.

The farm sector continues to remain unviable. Fragmentation reduces output, leading to a vicious cycle of reduced access to modern technologies and chances of getting credit at subsidised rates. The leased market in land is not official as tenancy is not recognised. The pattern of fertiliser subsidies creates an imbalance in fertiliser usage affecting the nutrient balance in soils, resulting in wasteful water use and land degradation. Free electricity and unlimited subsidy for electricity has led to massive groundwater depletion.

With a strategic and structural shift since 2002-03, the contours of the agriculture sector have changed irreversibly. When the monetary contributions of the livestock sector surpassed that of the foodgrains sector, since 2002-03, economists dismissed it as a temporary blip caused by the coping mechanisms of the poor due to repeated droughts. Since then, the fisheries and livestock sectors have been growing at rates faster than the crop sector. (See Pie chart)

We have failed to capitalise on the livestock sector. Rural poverty is less where farmers concentrate on livestock rather than on crops. Yet India’s agricultural policy has traditionally been driven by crops, specifically foodgrains

Livestock is not affected much by climate changes or global warming and the sector has grown to become 25 per cent of agriculture GDP and 5 per cent of the country’s GDP. It generated output worth Rs 3,405 billion while value of foodgrains was lower at Rs 3,156 billion nd that of fruits and vegetables at Rs 2,088 billion. In 2009-10, livestock output was 2.5 times the value of paddy and more than three times the value of wheat. For smallholder farmers, this has been a boon; 65 per cent smallholder farmers report income from livestock and percentage share of livestock in total income is around 15.5 per cent. India’s agricultural policy has traditionally been driven by crops, specifically foodgrains, with fisheries and animal husbandry as peripheral or at best seen as useful for smallholder farmers to diversify their risks. Rural poverty is less where farmers concentrate on livestock rather than on crops. We have failed to capitalize on this potential as the livestock sector receives only 12 per cent of public expenditure on the agriculture sector. Barely 5 per cent of farm households can access quality technology or insurance facilities. A further 18 per cent potential is destroyed by diseases as veterinarian facilities are available to only 20 per cent of the sector. Only 4 per cent of institutional credit is available for the livestock sector as 70 per cent of livestock is owned by landless and smallholder farmers who have little political clout. Our standards of productivity are 20-60 per cent lower than global standards.

Our agricultural system has failed to boost pulses and oilseeds production, leading to costly imports. Do we as a nation wish to continue with costly imports? Can we not take up such productivity issues as challenges? What about our banking system? How long will it continue to say that there are no worthwhile projects to finance? A National Sample Survey in 2003 reveals that only 21 per cent farmers have access to agricultural credit from institutional sources. (See Table)

Gross capital formation in agriculture has declined between 1980-81 and 2001-02 for the public sector. The doubling of credit for agriculture in 2004 reversed this trend. In 2008, the debt write-off for 31 districts as part of the Prime Minister’s Package followed by the Agricultural Debt Waiver and Debt Relief (ADWDR) scheme costing Rs 700 billion was only politically viable. Loan repayments have declined, with farmers waiting for another election year bonanza in 2014. It will take many years for banks to stabilise the sector (it took the banking system 10 years to settle down after the earlier rural debt write-off in 1989.)

The 11th Five Year Plan aimed at 4.1 per cent growth in agricultural GDP so as to enable overall GDP growth to touch 10 per cent, but the global economic downturn put a spanner in the works. What has held back agriculture? When can we expect our agricultural economy to shift from a subsistence-level economy to a commercial economy with farmers earning enough due to favorable cash-flows?

We need to accept the fact that our entire agricultural and attendant support systems are antiquated and our present-day agricultural scientists are unable to deliver results. If we are really keen on food security and on ensuring our survival, we need to invest in agriculture today. Let us initially concentrate on five or six major crops and then revive our pulses and oilseeds programs. We need to give a big thrust to commercial agriculture production (fruits, flowers and vegetable cultivation). A boost to our food security by conducting research on minor millets is long overdue.

Our extension system is in disarray and the KVKs/ATMAs produce sporadic results, very slowly. We refuse to train our farmers and women farmers are officially not recognized, let alone trained. Women farmers carry out all farming operations except ploughing and this gender bias must be reversed. India’s number one position in the world in milk production is largely due to women farmers who manage the small dairy units and look after the animals. Not recognising their efforts and not training them to achieve better results in farm and off-farm activities defies any rational analysis. If all farmers are scientifically trained to enhance production and productivity, we could build up a sustainable and stable agricultural system and the entire rural economy will be vibrant.

Creating a 11-KVA line dedicated for agricultural use is a good idea to ensure more electric pump sets and save on diesel costs and inefficient pump sets. Appropriate rural infrastructure is essential and APMC cannot be permitted to continue. More Joint Liability Groups (JLGs) and farmer clubs, producer organisations and farmers’ associations to aggregate, sort, grade and transport/negotiate on behalf of farmers, are needed.

This is the least we can do to salute the farmer, recognize him as a micro-entrepreneur, encourage him in a spirit of partnership and boost his production and productivity skills. Instead of perpetual indebtedness, we have to offer him the opportunity of an equity option which is available to any micro-entrepreneurial venture in the non-farm sector. The farmer must be treated as a business owner and bankers must collaborate with farmers to ensure a future for him and his family. He requires a partner or stakeholder who treats him with dignity, shares in his risks and enables him to unleash positive energy in improving his financial margins and business skills.

Every farmer has the right to dream of a better future, and every farmer suicide is a shame on civil society and the government in power. The question is: Do we have the will to take up the cause of farmers? Our food security is at stake.

A supportive system which helps our farmers with proper infrastructure, training, quality inputs at fair prices, and appropriate credit/equity can no longer be ignored. This will require: