Growth of Indian economy continues to depend on the sustainable growth rate of agriculture sector as 62 percent of population continues to depend on agriculture. Promotion of growth and eradication of poverty continue to be the objectives of India’s economic policy ever since we launched planned economic development in this country. Yerram Raju asks whether and to what extent the poor have benefited in the process 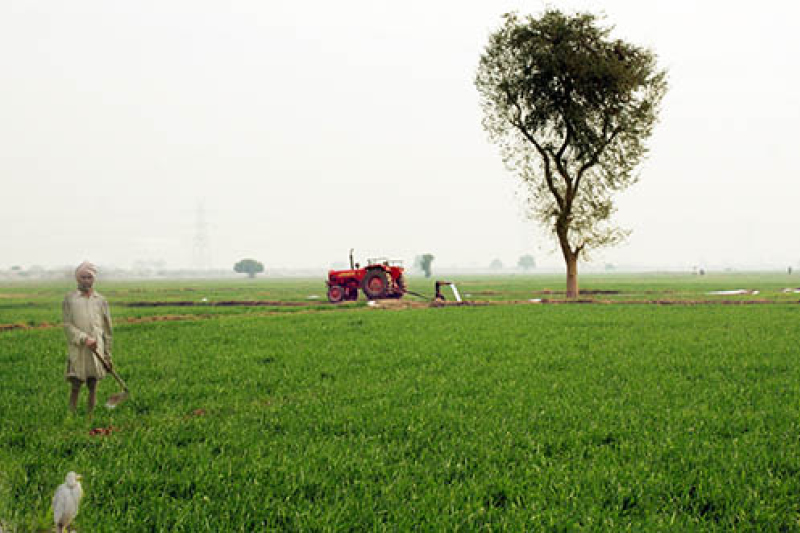 What needs to be recognised, however, is the agrarian economy moved away from famines to increased production and productivity, higher buffer stocks of grains that prompted Supreme Court to call for distribution of grains free to the starving poor. During the last three decades or the six Five-Year Plan periods, growth rates of agriculture largely depending on favourable monsoons, show a declining trend except in the XI Plan moving up eight notches over the previous Plan.

Some favourable aspects of growth have been that there is enough enthusiasm and enough incentive for private investment in agriculture as investment in agriculture went up from 12% in 10th FYP to 20% in 11th FYP. But it has occurred more due to diversification of agriculture to animal husbandry, horticulture, aqua and other allied sectors. Though we had worse drought in 2009-10 than 2002-03, we have been able to withstand it due to this diversification and the overall growth of the economy. Structural changes that need to be noted are that the number of large farmers has been declining during the last five years because they are leaving agriculture and taking to either services or real estate sectors because agriculture has become unremunerative. They are, however, not leaving land but leasing out land causing the lessees to fend for themselves and this has brought to fore the issues of tenant farming. The marginal farmers found more advantage in moving to labour market that promises higher wages than farming and the small farmers are finding difficulty in coping with the 20-25 percent rise in labour costs in the costs of cultivation.

A major dilemma for policy makers is the classic trade-off between growth and equity. Some key issues for agricultural policy are discussed below:

A sustained effort has to be made to enthuse the farmers to take to crop planning consistent with natural resource endowment. This would demand intensive extension efforts from both the State Departments of Agriculture and already well-developed Research Institutions. We have misdirected subsidies routed through the Public Distribution System, Fertilizer industry and loan write-offs at the will of the politicians. Assured Minimum Price Support has encouraged farmers to go in for food grain crops like paddy and wheat irrespective of the natural resources that are available for such crops.

II. Regeneration of the Natural Resource Base

Soil erosion and depletion of soil nutrients resulting from single crop cultivation or inefficient crop rotation is a major problem in many parts of the country. For example, in the Sangli-Satara-Kolhapur belt, sucrose yield of sugarcane has come down from 12 per cent a decade and half ago to 6 per cent now, making the sugar industry uncompetitive. There is depletion of ground water resources in several parts of the country including Punjab, Haryana, Andhra Pradesh, Karnataka, Tamilnadu etc., where the energy required for pulling out one unit of irrigable water has been on the increase.

Agricultural policy changes during the past decade have altered the comparative advantages of property owners, tenants, and sharecroppers. Today, one will find more and more tenants cultivating farmlands than the owners despite the number of operational holdings showing an increase consistently without corresponding increase in the area of operational holdings.

Although the programme of consolidation of holdings was suggested to State Governments five decades back, it did not take place in several States excepting in Punjab, Haryana and in Uttar Pradesh partly. Consolidation would also help in generating environment-friendly agricultural operations (e.g. the effects of aqua culture on agriculture in freshwater cultivating farms in States like Andhra Pradesh, Kerala, Orissa, West Bengal, etc.).

Loans can be raised against the land-share certificates in the State and sub-State Land Markets that could function under the control of the existing Stock Exchanges with separate sets of rules that could be framed by the SEBI.

There are nine ministries in the Union Government, with each Ministry working out its own policy, many a time independently and without evaluating the implications on the value addition of a Policy measure. We should have a Regulatory Impact Assessment of every policy decision of every Ministry before the Budget session every year or at the time of framing any law. This Regulatory Impact Assessment should clearly lay bare the implications of the Policy on the small and marginal farmers and other vulnerable sections of the population as also on the links in the Supply Chain Management of the Farm Sector.

Unlike anywhere else in the world, farm and allied sectors are looked after by at least fourteen ministries and a host of organisations. There is State Planning Board and the Union Planning Commission at the helm to decide on many issues that concern all these ministries.

In agrarian states like Andhra Pradesh, a beginning could be made in reorganising different departments under single Minister who should have full comprehension and empathy for the farmers. This would also help in reducing unnecessary expenditure in multiple delivery points in meaningless directions.

Further most private investment in agriculture is more “debt-driven” than “equity-driven” and this debt comes both from institutional and non-institutional lenders. 70-80% of capital investment went into just ten states in the country—mostly irrigated tracts. These are: Andhra Pradesh, Karnataka, Tamilnadu, Kerala, Maharashtra, Gujarat, Punjab, Haryana, Uttar Pradesh, and West Bengal.

Information from various NSS surveys suggests that rural economy has seen sectoral diversification with the share of non-farm sector in employment increasing modestly during the last ten years. The work force shifted from agriculture to manufacturing and services.

There has been also an increase in the range of services with traditional rural services sector based on community or caste being enlarged to others. MGNREGA tilted the scales from productive employment to unproductive wage distribution albeit with modest success in areas where the social audit has been effective. Non-farm employment in rural areas and agriculture growth has reported positive correlation in a few research studies. (Kundu, A., Country Study on Right to food; India, FAO, Rome, 2004).

Employment elasticity (percent change in employment for one percent change in corresponding output) worked out by Prof Aarif Waquif in his research study relating to South Asia indicates that it was 0.5 in agriculture and manufacturing 0.7 in services and 0.6 in economic infrastructure as per the related GDP growth components in 1997. If out-migration from the rural areas continues at the current pace with volatile growth in manufacturing sector, the prospects of stable employment opportunities would vastly diminish.

There is a broad realisation that value addition to agriculture would take place only through agro industries and agribusinesses. The UPA Government has announced incentives for setting up agro-enterprises with support from the banks and financial institutions. All these efforts are still in embryonic stages.

The PACS, whose revival got a shot in the arm with the implementation of the recommendations of Vaidyanathan Committee, can fulfill this felt-need provided the two key deficiencies afflicting them are tackled statutorily – managerial and governance. The advantage with the PACS is that these can take all types of activities that contribute to growth of the entire rural economy: they can store seeds and supply; and ,they can extend credit and recover it with ease.

The SHGs in Andhra Pradesh registered under the AP Mutually Aided Cooperative Societies Act, 1995 similarly succeeded in providing livelihood opportunities by providing end-to-end services to their members. They created record of sorts in procurement of maize in Nizamabad and Karimnagar districts, storage and sale to the advantage of farming community. Last two years, they have even been distributing fertilizers.

Most PACS are being computerised under a specific revival plan and accounting procedures have also moved in tandem with those obtaining in the commercial banks. Technology would finally integrate the entire financial system at the micro level with the macro level.

Economic empowerment of the vulnerable groups in rural areas would depend upon the provision of necessary wherewithal within their existing domestic environs instead of shifting them to common work places. Agro-processing therefore assumes critical importance in this regard.

The constraints that the farmer faces in the agro-processing link of the supply/value chain are related to lack of adequate information about the possibilities of processing agricultural products, the importance of price and quality. The financial constraint can be overcome if the State Cooperative Bank can directly finance the PACS with 70 percent refinance from NABARD as participation in this sector requires considerable amounts of investment.