The Central Government and most States have let down the farmers and the farm sector by continuous neglect since 1985. The PL-480 Fund which built up the ICAR research institutions and agricultural universities, enabled scientists to contribute to the “Green Revolution” and led India to self-sufficiency in food despite a burgeoning population. The Agri-research systems built up over the years have ensured that our seed-scientists are among the best in the world. But, there is a major disconnect. When agriculture is a state subject, why not build up state-specific and farmer-friendly infrastructure to boost agricultural productivity? Instead, the Centre and the States have parallel institutions and policies which add to all round confusion. Further, if specific targets have ever been given to these huge research institutions built up over the years, then it is a closely guarded secret.

No political leaders have ever set specific attainable targets for each of these research institutions. The last Prime Minister to take some interest in agriculture was Rajiv Gandhi, who set up 6 Technology Missions in the 1980s for Telecommunications, Water, Literacy, Immunisation, Dairy and Oilseeds all under the leadership of Sam Pitroda. While the Technology Mission on Telecommunications was a smashing success, the others came a cropper. Today, we have the largest irrigation system in the world; the 2nd largest country with arable land and over 51 per cent of our labour force is in agriculture. The contribution of Agriculture to the GDP has reduced to 14 per cent over the years.

Problems of Technology Choices for Farmers

Why is it not possible to concentrate the country’s slender technical and financial resources on research for a few major crops, like Paddy, Wheat, Maize, Cotton, Soyabean, Oilseeds (groundnuts, mustard, sesame etc.), Pulses (Moong, Arhar, Masoor etc.) and Minor Millets (Bajra, Jowar, Ragi) with help in the form of technical expertise from USDA? Why not set annual district-level targets for cereals, oilseeds and pulses? How about encouraging peri-urban vegetable cultivation and horticultural crops for improving the farmers’ margins? And if quality seed or productive-levels have not improved, remove the deadwoods who presently adorn the research institutions and agricultural universities. The Central Government must set productivity and production levels for each State and each State in turn will set the same for each of its respective districts, with adequate fixing of accountability at all levels for non-performance.

While production increases, productivity in Indian agriculture is waning and this decline is attributed to the lack of long term credit availability for land improvements, mechanisation and farm modernisation.

This will however require allocation of adequate inputs and financial resources. The KVKs and the ATMAs have failed to meet the genuine needs of the farmers. Why there is no emphasis on Biotechnology and its applications in agriculture (except maybe, in bananas)? Why is our agri-productivity level suffering in comparison to China, USA, Vietnam, Costa Rica etc.? Why are spurious seeds, fertilisers and insecticides destroying the lives of farmers? Why there is no agricultural extension system, which meets the requirements of improving the financial margins of the farmers as also the crop productivity? How about de-risking the smallholder farmers who bear the production risks (80 per cent) and the marketing-risks (20 per cent) without any real help from the various crop-insurance schemes?

The farmers’ needs are few and they require only good seeds (with germination rates of about 90 per cent), rain-water harvesting structures on the lines of the Gujarat model, appropriate rural infrastructure (including modern warehouses, cold storages, transportation and market connectivity as also technical advice in case of emergencies of droughts, pests, etc.). Can we not ensure these minimal requirements for our farmers? Can we not give dedicated 11 KVA lines for agriculture so that efficient electric pump-sets are used for groundwater extraction, instead of inefficient diesel pump-sets (which should be banned)?

Only about 11 per cent of our farmers have access to institutional credit, which is subsidised by Central/State Governments and the effective interest works out to 4 per cent per annum, if prompt loan repayment is made. Lack of proper land records (computerisation which started in 1975, is still going on!), lack of farm accounting records, lack of transparency in sanctioning loans to farmers, the failure of the Co-operatives, lack of rural ATMs and Rural Credit Bureaus have all added to the farmers’ woes. There is some flow of credit for crop loans (6-15 months), but long term loans exceeding 3 years, are only about 15 per cent of the estimated Rs 6 trillion of agricultural credit disbursed in 2013-14. Thus, while production increases, productivity in Indian agriculture is waning and this decline is attributed to the lack of long term credit availability for land improvements, mechanisation and farm modernisation. Why the Vaidyanathan-II funds for cleansing the Long-Term Corporate Credit Structure were not made available since 2007, is an enduring mystery which only successive UPA-II Finance Ministers can answer.

The least that can be done by the RBI/NABARD is to ensure that all farmers with landholdings be entitled to a 5-year tenure KCC (Kisan Credit Card), which is chip-based for swift and secure funds-transfer. For oral lessees and tenant farmers, the Joint Liability Group credit facilities are available. The present KCC is a mere passbook with a 3-year tenure and is not useful for farmers. The 5-year KCC tenure takes care of the normal crop cycle of two good crops, two average crops and one bad crop year over the 5-year period. The crop-insurance scheme (and not the present crop loan-insurance scheme) must be redesigned on a weather-based model and subsidised adequately, so that farmers do not have to commit suicide in case of crop-failures. The draconian APMC provisions have also to be done away with to enable and incentivise farmers to achieve better productivity levels.

De-risking the smallholder farmer is a priority by diversifying into horticulture, animal husbandry and fisheries. The farmer does not require handouts or subsidies and should be given due respect in Indian society. Efforts should be made to enhance the knowledge-base and skill-sets of all farmers, as farming increasingly becomes more scientific. The farm sector continues to be unviable for the smallholder farmers with increasing land fragmentation reducing outputs, leading to a vicious cycle of reduced access to modern technologies and credit at subsidised rates. Imbalances in fertiliser usage due to subsidies and subsidised electricity, all have their own attendant problems. The smallholder farmers should be enabled to build up their coping mechanisms with better rural infrastructure.

The RIDF (Rural Infrastructure Development Fund), which has been successfully administered by NABARD for about 20 years, is reportedly under threat from the Ministry of Finance and the RBI for obscure reasons. Things may change now with positive provisions made for RIDF in the budget.

To ensure better productivity for the farmers, long-term credit flow, infusion of bio-technology, better quality farm equipment, low-cost poly-houses, drip-irrigation systems, balanced fertilisers and micro-nutrients as per soil-tests, are all essential. If Agriculture is really a priority and the plight of farmers is to be reduced, mere lip-service to the farmers’ cause will not do and this is a time when actions speak louder than words. Who will plead the farmers’ cause and give a helping hand when required? 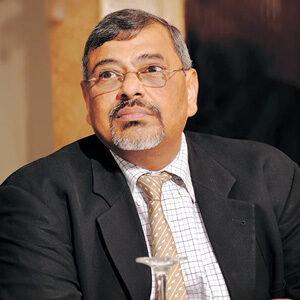 K G Karmakar, PhD, Distinguished Fellow, SKOCH Development Foundation, was Managing Director of National Bank for Agriculture and Rural Development (NABARD). With over 30 years of professional experience as an executive in various banking and financial institutions such as State Bank of India, Reserve Bank of India and NABARD, Dr Karmakar has specialised in agriculture/rural credit, corporate planning, micro-credit, project management and rural infrastructure development. He has many publications to his credit such as: Agricultural Project Management for Bankers; Rural Credit and Self-Help Groups and Microfinance in India. He has published more than 60 articles related to rural credit and rural development, some of which has been presented in national and international seminars.

India 2.0 - Delivering to an Aspirational India