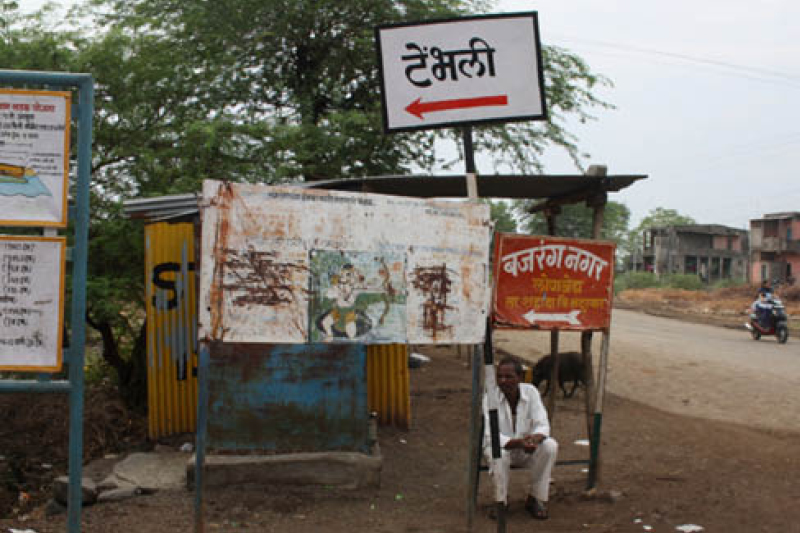 Ranjana Sadashiv Sonawane (41) is a disillusioned woman. The mother of three children, Ranjana, who made headlines in September last year when Prime Minister Manmohan Singh and Congress President Sonia Gandhi traveled to Tembhli, her non-descript, and squelchy hamlet, to hand over to her the first UID card, is no more under a delusion.

Her dream of getting a concrete house, regular work, toilet, free medical treatment and sundry other benefits lies shattered. So much so that she has been forced to dump her unique number Aadhaar card under a pile of clothes in a metal box, the tribal households in her village keep for stuffing their not-so-widely-used stuff.

Sahada administration piled up on villagers’ expectations in Tembhli by promising them concrete houses, self-employment to the unemployed, free bus passes and overall prosperity

Apparently, the administration in Sahada, a tehsil in Nandurbar district, which is about 15-minutes drive from Tembhli, made no effort to explain the limited use of Aadhaar card to the simple villagers before visit of top functionaries led by the Prime Minister and the Congress chief to hand over the cards. Rather it piled up on their expectations to hard sell the cards. It promised concrete houses for all, self employment to the unemployed, free bus passes and over all prosperity in the village.

Then Sahada Tehsildar Yuvraj Rajput in fact drew up a list of the villagers for the concrete houses and penciled in around 40 of them for grants for self-employment. The self-employment proposal included grants for buying cycle rickshaws, setting up flour mills and eating joints. Unfortunately, the proposal has ever since been lying with the ministry in Mumbai. “It’s pending with the Mantralya. I sent it six months back. The proposal had nothing to do with the UID,” Rajput now admits.

But for the residents of Tembhli, the course correction or the admission of truth is either yet to reach them or has come too late. They cannot quite understand why the promises have not materialised despite them having accepted the unique-numbered cards. Why the benefits, tom-tommed by the government in media and otherwise, have not accrued to them.

“I showed the card in hospital and was told that it would be useful only for big operations. We still live in a kutcha hut and no toilet has been made in our street. Moreover I still toil in others’ farms. We have not benefitted at all from the card,” Ranjana says throwing up her hands in despair.

What further put paid to her hopes was an encounter with a bus conductor during a journey to her parents’ house. When she showed the card to the conductor to seek concession in the fair, the latter tersely told her, “Iss pe government ka sikka nahin hai. Akha desh ko fayda nahin hoga. Rakh de peti mein isko (It does not have government’s stamp. It won’t benefit the entire country. Dump it in the box).”

Worse, the state government officials who promised to construct a pucca house for her family under Indira Awaas Yojana (IAY) during the PM and Sonia Gandhi’s visit, have not been seen again in the village. “Paanch mahine ho gaye par unka kuchh pata nahin (There is no news about them even five months later),” Ranjana regrets posing with her husband Sadashiv Sonwane, who also labours in the farms.

Another shocking evidence of government’s lackadaisical approach is that the contractor, who started laying cemented streets in the village before Sonia Gandhi’s visit, decamped immediately after the card distribution got over leaving the work incomplete. “He said the government had not paid him,” states Bansi Gora Chendul (55), a neighbour of Sonawanes, pointing towards the jagged black stones, scattered in one of the streets of the village. Chendul, father of two grown up sons, migrates to Somnath, Junagarh or Patan in Gujarat every year to earn a livelihood from farm work there.

“We were told that card would solve all our problems. We would get pucca houses. There is no gain from it,” Chendul says. He even claims that the village Patwari noted down his name for a grant of Rs 30,000 for the purchase of a bullock cart only to decline it later.

Like Ranjana Sonawane, Chendul has stored his Aadhaar cards in a tin box and brings it out only to show it to visiting journalists. In fact, this appears to be the case with an overwhelming majority in around 1,000-strong Bheel-dominated village where people largely live in huts made of mud, khaprail and straw.

Leave aside other benefits many of the villagers have not even got bank accounts, which were to be linked with the Aadhaar number. “Ghar bandhi nako. Paani deva nako. Bank accounts nako (No houses, no water and no bank accounts),” asserts Kantabai Haru More, a tribal woman flanked by her son Vijay Haru More. Vijay claims not to have been told about MGNREGS and thus, earns a livelihood by working on a truck.

Subhash Narsingh Sonwane, a member of the last Panchayat in Tembhli (elections were scheduled for June 2011), counts grant of pension to 45, goats to 10 and bullock carts to 15 villagers as the benefits from the UID Aadhaar. But current Sahada tehsildar Pramod B Bhamre disagrees. “Aadhaar has nothing to do with all these. It only helps one establish identity,” Bhamre claims.

When shown the grimy streets, Subhash too clams up. “The administration says the remaining streets will be laid under BRGF (Backward Region Grants Fund).” He regrets that no flood control programme has been chalked out even after the visit of the Prime Minister and the Congress president. Tembhli is situated a stone’s throw from Gomai river, a tributary of Tapti, which wrecks havoc in many villages during the monsoon season every year.

What people in Tembhli and neighbouring areas have still not realised and what takes the goat of civil liberty champions is that the state government has captured not just their biometrics but also personal information like trade license number, income tax number, mobile number and whether one is involved in child labour

Another irony is that MGNREGS, where payments are supposed to be linked up with the UID number and the bank account has not had much of an impact in Tembhli and its neighbouring villages. “Two months back, 25 people worked under the programme. We have received payments now. What is the point in working?” says Kailash Bhuria Marathi, a resident of Tembhli. Marathi finds that labour in Gujarat is better paying than the MGNREGS.

V B Gurav, Village Development Officer of Lonkheda, Asus and Tembhli, admits there is not much work available under the MGNREGS. “There is no work to offer to people. There are no ponds etc because Lonkheda is mainly an industrial area.”

The Aadhaar card has so far also not been linked with public distribution system (PDS) in Tembhli and the residents still get ration on the basis of yellow card. No wonder, the residents look at around 4×6 acknowledgement copy of the card as a huge let down. “They said the card will end all our woes. No such thing has happened. We are where we were,” chorus emaciated Vanibai and Fhulsingh Tarsingh Thakre, exhibiting their cards for the benefit of lens.

What people in Tembhli and neighbouring areas have still not realised and what takes the goat of civil liberty champions is that the state government has captured not just their biometrics but also personal information like trade license number, income tax number, mobile number and whether one is involved in child labour. Besides using the one-page Aadhaar enrolment form of the UIDAI, Maharashtra government is using two extra pages where they ask the card seeker to put voter card number, pen number, LPG company’s name and even name of the electric company, they subscribe to.

Though the UIDAI says the unique number is optional, Maharashtra government seems to be all set to make it mandatory. It has already made a beginning from Sahada. All government employees in the tehsil have been told that their salaries would be attached with the UID. Sahada administration in fact set up a special desk in Tehsildar’s office to take their biometrics.

Sahada Tehsildar Pramod B Bhamre says salaries of all government employees in the sub district will be tagged with the UID number. “The UID numbered card is the best proof of identity. Employees of Municipality, Water Supply, Hospital and Sanitation have already given their biometrics. We transferred their data to the UID in March this year and are waiting for the cards now.”

Ironically, no benefits and yet the UID cards of Tembhli residents have become the envy of its neighbourhood. Residents of Lonkheda, a village that precedes Tembhli and Asus that follows Tembhli, resent it.

“Namaskar fakt kare bulaya. Koi aata nahin, jaata nahin hamare yahan (I was called merely to greet the Prime Minister. Nobody comes to my village),” moans Sajibai Tajir Sonwane, Sarpanch of Asus village. Asus does not have a single concrete street and its residents appear to be steeped in poverty. Their main occupation is cattle rearing and work in farms.

Lonkheda is no better placed either. “Tembhli has concrete streets. There are no grants for us,” grumbles Bhau Laxman Patil, a farmer from Lonkheda.

Meanwhile, the work of UID cards is moving at a frantic pace in Sahada. Total eight counters – one in Tehsildar’s office and rest in a school under Municipality – have been set up for taking biometrics of the citizens. While the desk in Tehsildar’s office is taking biometrics of the villagers in the tehsil, the school counters cater to the approximately 65,000 urban population of Sahada city.

“We’ve already recorded biometrics of 22,000 people. We will complete the task in next three months,” promises Satish Sonwane, an officer with Sahada Municipality. 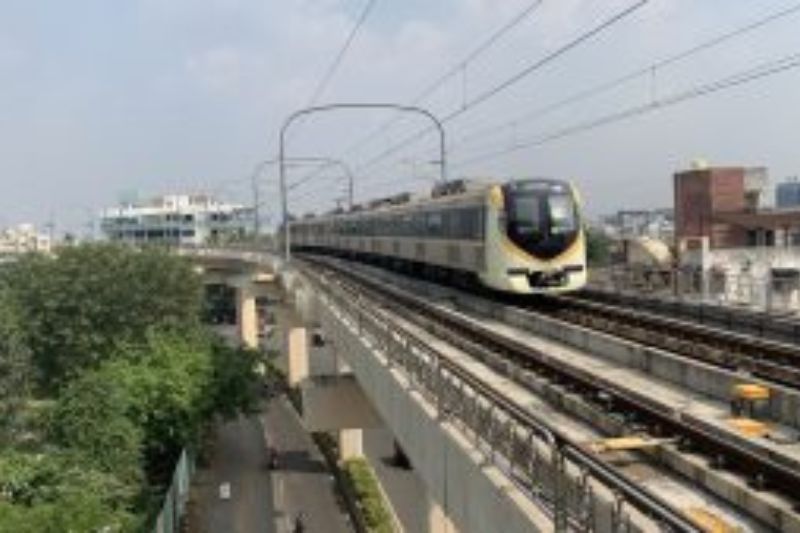 SKOCH team visited the project to experience it first-hand. A report from the field. Keeping citizen at the core, at each step, Maharashtra Metro Rail Corporation Limited or Maha Metro...