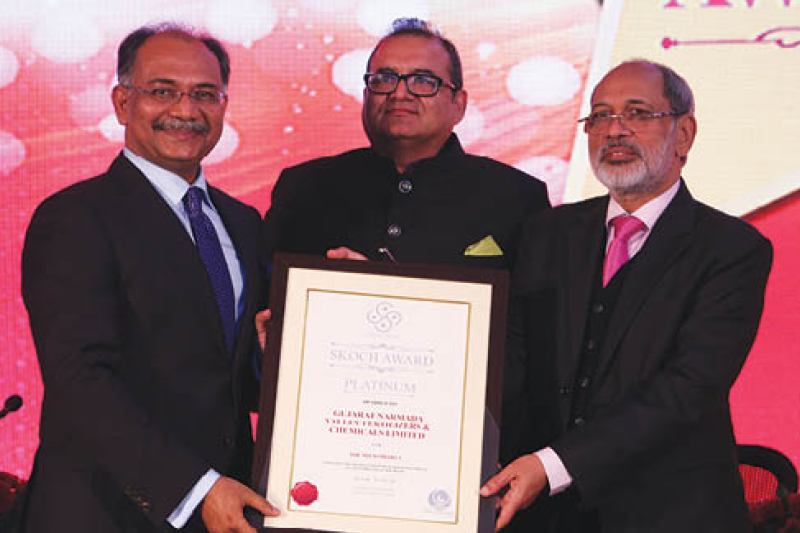 For this pioneering effort towards farmer-oriented deeds, Gupta was recognised and conferred the SKOCH Blue Economy Person of the Year Award 2016.

Eureka of Neem Project led to sourcing of Neem seeds from rural women to extract Neem oil. Through a detailed backward integration supply chain that has been created for sourcing, storage and oil extraction, etc, the Neem Project has generated massive employment opportunities for landless labourers and rural women.

GNFC continues to build its momentum of socio-economic impact on the rural poor, through forward integration of Neem soap manufacturing. It has rendered training in soap making to Self Help Groups (SHGs) in Bharuch district. Currently, the rural women run daily operations of the soap unit and earn a steady income.

GNFC’s approach to the production and manufacturing of Neem oil and Neem cake fertiliser is innovative, integrated and is an example of community-led transformation laying a strong foundation for community building.

The organisation has developed a well-organised system for buying Neem fruits at a fair price. In 2015-16 alone, I12-15 crore income has been generated for over 1.25 lakh women in 22 districts. Indirect employment for over 50,000 rural people has also been created. A system of 2,200 Neem seed collection centers, across 4,000 villages, along with women SHGs, Pani Samitis (Water Committees), Co-operatives, etc, has streamlined the supply chain to be self-sufficient. Ergo, GNFC’s Neem Project was awarded the SKOCH Platinum award, the highest merit to be conferred in Sustainability and Blue Economy Category.

UNDP Impact Assessment on the Neem Project, conducted in November 2016, quantified the project’s socio-economic footprint. It noted that the women beneficiaries were empowered by increased decision-making power and reduced incidence of domestic violence. It has also positively influenced the community by reducing rural indebtedness, seasonal migration and patriarchal control, while increasing expenditure control and asset creation.

The policy mandate of 100 per cent Neem coating of urea would help curb the diversion of subsidised urea allocated to farmers, to chemical factories. This also brings the added advantage to farmers requiring 10 per cent less urea, as its effectiveness is increased and the land benefits from the nutritional value of Neem too.