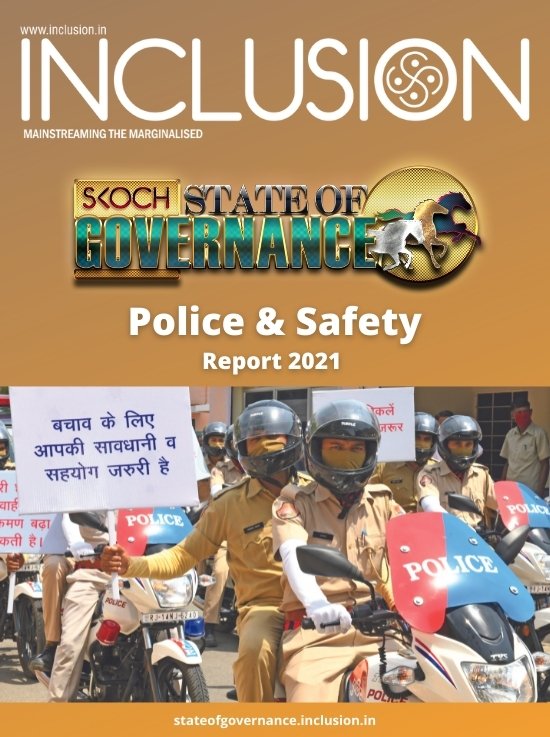 The police are the most visible and robust aspect of the governance machinery and a strong link between the people and the administrative infrastructure. Many important projects have come from the Police & Safety sector in 2021. 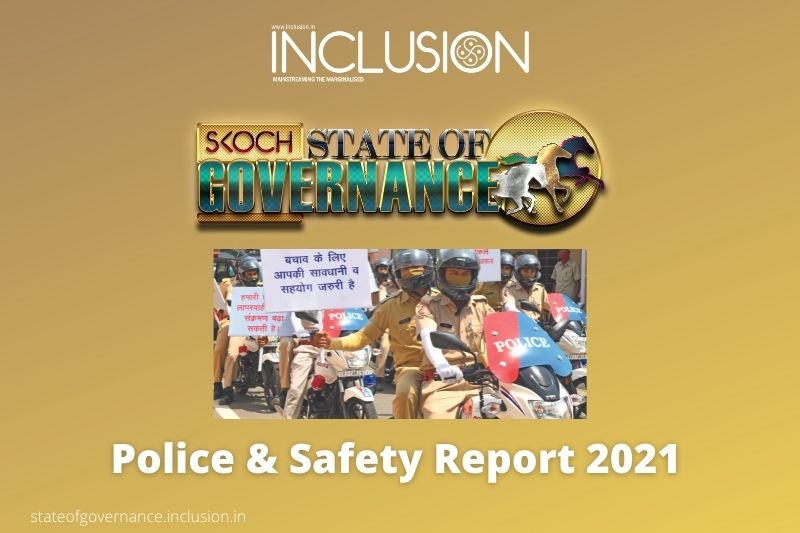 The Police & Safety sector is an important barometer for good governance in India. The local/ state police force is typically one of the most visible and accessible arms of the Indian governance machinery, and the most connected with the local population.

Over the last two years of the Covid-19 pandemic, the state police forces across the country have stepped up to immense challenges and served the people on the frontlines of this mammoth crisis. The SKOCH State of Governance report cards for the last two years have told stories of grit, determination, bravery and public service.

For 2021, the SKOCH State of Governance review assesses the contributions of the Police & Safety sector as a whole, studied from the prism of state-wise performance.

The second spot in 2021 goes to Telangana. The state ranked #3 in Police & Safety for 2018 before climbing up two places to #1 in 2019 and then falling four spots to #5 in 2020. Telangana is classified as a Performer state overall: the category refers to states that rank between #6 and #10 in the overall state ranking for each year.

Maharashtra is the #4 placeholder for Police & Safety in 2021. This rank marks a trend of consistent improvement over the last few years. From being unranked in 2018 for the sector to securing the #10 spot in 2019 and climbing up four places to #6 in 2020 and finally making it to the Top 5 in 2021, Maharashtra has clearly prioritised policing as a governance imperative in recent years. Maharashtra is also the #5 state for 2021 overall, closing the Star states category.

The #5 position for Police & Safety in 2021 goes to Himachal Pradesh. This is an improvement of four places since the state ranked #9 for the sector in 2020. Himachal Pradesh is the last of the Performer states, ranking #10 overall for 2021.

The #5 spot in Police & Safety 2021 rankings is also shared by Uttarakhand. The state has shown constant improvement over the last few years in this segment, from being unranked for it in 2018 and 2019 to coming in at #8 for 2020. The state is placed 21st overall, and classified in the ‘Others’ category.

Sharing the 6th place is Assam. Assam has shown tremendous improvement in the sector in recent years, which also underscores the state government’s commitment to good governance initiatives overall. Assam was unranked for Police & Safety in 2018 and 2019 before making the #11 spot in 2020 and climbing up 5 places to #6 in 2021. Assam is a Performer state for 2021, ranking #9 overall.

Haryana has placed 7th in the Police & Safety segment for 2021. The state’s performance in the last few years has been marked by recurring crests and troughs. From being unranked in 2018 to #5 in 2019 and then a decline of five spots to #10 in 2020 and back up to #7 in 2021, mapping Haryana’s year-on-year performance in the sector tells a story of a state still finding its rhythm in this particular governance niche. Haryana is ranked #12 overall in 2021 and classified as a Catching Up state (between ranks 10 and 15).

Decline In Rankings Since 2020

Some states have experienced a notable decline in performance in the Police & Safety sector in the last two years. A comparative analysis between 2020 and 2021 shows some surprising changes as well-performing states from 2020 have come through unranked for 2021.

The Central Lock-up Monitoring System by the Andhra Pradesh Police Department in Guntur is one of the most highly impactful Police & Safety projects in 2021. The project worked to make sure that each and every police station is equipped with total CCTV surveillance and cameras are properly installed at numerous spots so that the entirety of each station is fully covered. The cameras are to be outfitted with audio and video functionality, night vision and long-term storage capacity. The goal of the project is to improve accountability and transparency in policing, ensure lawful and high-quality conduct on the part of the police and engender trust with the citizenry.

The other highly-rated impactful Police & Safety project in 2021 is the ICJS Integration With CCTNS Project (EeCOPs Application – Crime Investigation & Prosecution) by the Police Computer Services And Standardization, Government of Telangana. The goal of the project is to use Information Technology to improve policing by improving information management. The idea is to use IT&C to augment information storage and access for all stakeholders in the judicial landscape for more efficient forensics, investigations, trials and better public services delivery.

Other Important Police & Safety Projects In 2021

The Improvement in Performance by Improving Quality of Training programme by Police Training Centre, Nanveej-Daund, in Pune, Maharashtra, is a nine months-long foundation course that trains newly-recruited constables. 19,958 beneficiaries have been trained in 40 batches at the time of this review.

Gujarat is credited with two impactful projects. The first is the Anti Suicide Helpline by the Police Department , Government of Gujarat (Home Department), in Surat. The helpline sensitively takes cognizance of the severe social and economic impact of Covid-19 on people’s lives and the resulting emotional and mental health struggles. The helpline has saved over ten people since its inception. The second project is e-Cop (A solution for efficient policing) by the Commissioner of Police Rajkot City. The project uses technology to monitor daily policing functions. The software has been designed to collect and furnish data to police officers to aid with tasks like patrolling and data-driven force deployment.

Tamil Nadu is recognised for the Holistic Approach In Crimes Pertinence to Women And Children project by the Crimes Against Women and Children Wing Tamil Nadu Police Department. The CWC Wing works on three tiers to tackle the scourge of crimes against women and children: a) careful monitoring of important cases b) collaboration with other relevant government agencies and c) running awareness and sensitisation campaigns. Community-focused policing and sensitisation and training of field officers are key features of the programme.

The Assam Police Shishu Mitra Programme by the Assam Police in Guwahati is another impactful project for Police & Safety in 2021. In collaboration with UNICEF and UTSAH, Assam Police have made a concerted effort to develop child-friendly policing mechanisms to be able to empower the force to fulfil one of its most critical functions: ensuring the welfare of children.

Himachal Pradesh ranks well with DAD (Drive Against Illicit Drugs) by the Sirmaur District Police, Government of Himachal Pradesh. The programme has been instrumental in tackling the sale and distribution of illegal drugs in the state, bringing down many drug networks. Intensive record-keeping, data-driven lead generation, CCTV surveillance, community engagement, proactive prosecution and frequent raids have helped tackle the illicit drugs trade in the state.

Uttarakhand is congratulated for its Community Basket initiative by the Uttarakhand Police in Pauri Garhwal. The programme ensured the delivery of essential supplies, medicines and medical equipment to those in need impacted by the Covid-19 pandemic and the subsequent curfews and lockdowns. Community Baskets were established in 13 police stations and people voluntarily donated medicines, ration kits, healthcare equipment, etc. to provide aid to the needy. 1563 calls for aid were verified and addressed, the police visited 1024 villages and distributed 31,596 masks and 35,000 food packets.

Apart from the two highly impactful projects discussed previously, Andhra Pradesh is also credited with a number of other meaningful initiatives. The Andhra Pradesh Police Department has made contributions in the form of projects like Court Blaze, Women Help Desk, Automated Police Online Information System and HAWK (High Alert Wireless C(K)ommand). The Andhra Pradesh Police, Ananthapuramur Range, won an award for the COVID Treatment Tracker. Operation Samaikhya by the Chittoor District Police, the Police Welfare in Pandemic Policing effort by the Krishna District Police and the 3 NETRA project by the Tirupati Urban District Police are other important policing initiatives to come out of Andhra Pradesh for 2021.

Telangana too has made other significant contributions to the sector in 2021. The Telangana State Police Department has been recognised for a number of projects including the TS-COP Mobile App For Empowering All Frontline Police Officers of Telangana State, Electronic Surveillance (CCTV System), Soft Skills & Leadership Skill Training programme and TS E-challan – an Evidence-based Traffic Enforcement System. The Hyderabad City Police, Government of Telangana, has also done good work with its Police Pre-Recruitment Training Programme.