West Bengal with a population of over nine crore and spread over 19 districts is a key state of India and one with the most enriched history and heritage. 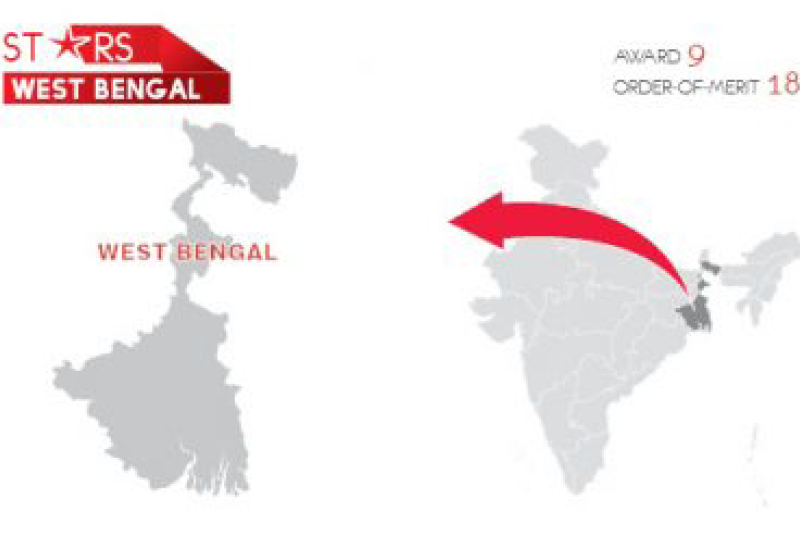 West Bengal with a population of over nine crore and spread over 19 districts is a key state of India and one with the most enriched history and heritage. Small wonder therefore that good governance and its corollary; e-Governance has played a key role in the modernisation and well-being of the state. Traditionally an agrarian economy, West Bengal has more than 70 per cent of its population living in rural areas. However, in recent years, under Mamta Banerjee as Chief Minister, all sectors are growing handsomely and the service sector has started dominating the state GDP, which is currently at around Rs 800,868 crore.

The NeGP of 2006 and the consequent adaptation of its tenets and vision by WB has seen an excellent coverage across departments and ministries, which has now resulted in almost 50 lakh e-transactions just for the month of August 2015 alone. West Bengal, therefore, is a winner in its Smart Governance push and marks its presence at this year’s Skoch Awards by bagging nine awards out of 18 SKOCH Order-of-Merit for its various projects.

West Bengal, therefore, is a winner in its Smart Governance push and marks its presence at this year’s Skoch Awards by bagging nine Awards out of 18 SKOCH Order-of-Merit for its various projects.

Commencing with Finance, Directorates of Commercial Taxes, Profession Taxes and the Finance Department, Government of West Bengal have all bagged Order-of-Merit with e-Grievances and Government Receipt Portal System (GRIPS) project of the Commercial tax Department bagging an Award as well. This department wished to provide transparent and easily accessible service to citizen and dealers anytime, anywhere and consequently enabled the on-line payment and digitisation of over-the-counter payment through GRIPS. Today, the revenue collection has gone up from Rs 303.4 crore in 2013-14 to 445.62 in 2015-16. The e-Grievance project, launched to ensure that citizens can lodge their grievances freely without having any fear or even a face-to-face interaction, is a resounding success. Since its launch in June 2014, over 330 grievances have been redressed and services provided have improved both qualitatively and quantitatively. The Profession Tax project is a part of the Mission Mode Project under MMPCT Project. The overall objective of this project is to standardise the business process thorough e-services and today it has ensured that this online process requires around 10 minutes and not weeks as earlier. The iFMS (Integrated Finance Management System) is a web-based Application for better financial and fiscal management of the state government integrating the entire cycle of financial activities. The application went live in April 2014.

In the category e-Governance, West Bengal is a category topper. The NeGP of 2006 and the consequent adaptation of its tenets and vision by West Bengal has seen an excellent coverage across departments and ministries, which has now resulted in almost 50 lakh e-transactions just for the month of August 2015 alone. The Paschim Banga Go-Sampad Bikash Sanstha (An Organisation under Animal Resources Development Department, Government of West Bengal) bagged an Award and a Merit for e-PBGSBS Management System. District Administration Burdwan; Bijin Krishna, SDM, District Administration, Murshidabad; CDAC – Kolkata, MSME & T Department, Government of West Bengal; and, District Administration Malda, all bagged Order-of-Merit. Some key projects are Centralised e-Auction System for North Eastern States (Sikkim, Assam, Arunachal Pradesh, Meghalaya, Mizoram, Manipur, Tripura and Nagaland, Queue Information System for Electors and Election Managers, Single Application Gateway for Statutory Clearances and MONITRA. The e-PBGBS system, aimed at enhancing the artificial insemination programme for cattle and the management around this led to a technology enabled Bovine Breeding Management regime providing, inter alia, a real-time information collection of Breedable Bovines of the state. Today, centralised data on animals, insurance of animals, farmers and information on schemes run by the ARD to facilitate the department goals are available with single mouse click. Another fine project developed by CDAC Kolkata and North Eastern Regional Agricultural Marketing Corporation implemented the Centralised e-Auction Portal for North Eastern States is aimed at developing and deploying an Online Auction management system, for buyers and sellers to come together and trade Agriculture products. This system is now set up at all eight North-East States for the benefit of over 1,70,000 farmers and traders of the region.

Kolkata Municipal Corporation (KMC) has bagged the only Municipality award for West Bengal this year but a look at its scope, execution and achievements make it shine out as a beacon to all states. It has implemented e-Governance across all the departments. All the KMC offices including Central Municipal Office (CMO), all the Borough offices and Unit offices are widely connected through a dedicated intranet network. KMC has successfully implemented Enterprise Resource Planning (ERP) system in three distinct areas, viz., Stores (Inventory), finance & Accounts and Engineering. ERP was introduced in the Stores and Inventory Department in 2010. Since April 2012, ERP engineering has also been introduced. All work tenders, power delegation details etc. are being recorded in the ERP engineering system. KMC had decided to use a generic Government e-Procurement system, built on using open source technologies. All the tenders estimated value above Rs 10 lakh, will now be published on web. KMC has procured Digital Signature Certificate for 35 Officers. KMC has taken various steps to make itself more accessible to its citizens. At present there are 19 Centres (10 e-Kolkata Citizen Service Centres, 9 Common Collection Centers) from where citizens can pay various taxes and fees.

In the Health category, West Bengal won Awards for both of its two Merit recipients, from the Department of Health & Family Welfare. The projects that did so outstandingly well are Innovative approaches of Fair Price Medicine and Diagnostic Centres that worked in public hospitals in West Bengal in reducing Out-of-Pocket Expenses and Critical Care Services below District hospitals in West Bengal – Quality Free Services in Public hospitals. The FPM project crystallised out when the Government of West Bengal conceptualised the project of opening Fair Price Medicine Shop (FPMS) as an additional delivery system round the clock for the sale of drugs, consumables and implants at affordable cost through a chain of Fair Price Medicine Shops under Public Private Partnership (PPP) model at different public hospitals in all districts of West Bengal. The scheme has been rolled in phased manner since December 2012 with a total target of 119 FPMS and till date already 100 shops are functional at public hospitals. All Teaching Medical College hospitals, District Hospitals, Sub Divisional Hospitals and select rural hospitals have already been covered by FPMS in this state. The other project on CCS was implemented in the wake of the Department of Health & Family Welfare decision to set up a CCU (Critical Care Unit) within 50 km from the residence of any patient. Reduction of the maternal mortality is also a priority issue of the national as well as state level. Some maternal deaths can be avoided with the immediate CCU services. As CCU / HDU are planned to open in 70 hospitals covering all Medical College Hospitals or Teaching Institutes, all District Hospitals, almost all sub-divisional Hospitals and in some State general & rural hospitals; almost the entire population of West Bengal has come under its ambit.

The web-based monitoring system is reaching 1,000 Gram Panchayats in 9 Districts. The application is covering approximately 2.2 crore people, which is about a quarter of the state’s population.

And lastly, but by far, not the least, in Agriculture & Rural Development category, is the Institutional Strengthening of Gram Panchayat (ISGP) Project by Panchayat & Rural Development Department. The web-based monitoring system was designed to completely replace the existing manual system of data accumulation and preparation of analytical reports required at various levels of PRI administration. Presently the web-based monitoring system is reaching 1,000 Gram Panchayats in 9 Districts. The application is covering approximately 2.2 crore population numbers, which is about a quarter of the state’s population.

There is a great potential for e-Governance in developing countries such as India. However this can only work in an environment where there is a good ICT infrastructure. Unfortunately, in most developing countries, there are many constraints blocking many initiatives. These include lack of sustainable ICT infrastructure, absence of appropriate skills among potential users of ICTs (farmers, rural communities, extension staff and researchers etc), lack of appropriate content and lack of access to ICT facilities.

Locally relevant digital content has to be developed or adapted; and access to ICTs should be made affordable for populations. Otherwise benefits of CSC applications, for example, will remain beyond reach of rural communities and will merely exacerbate the existing rural digital divide – leading to an ever-widening knowledge gap between information “haves” and “have-nots”. These e-Governance initiatives can help to reduce the “electronic gap” between rural and urban communities.

A proactive and sustainable drive mentored by the government of West Bengal, with the support of all stakeholders, needs to be implemented to attract investments across sectors.

Over the years, especially in the last decade, Bengal has lagged in terms of growth due to a variety of reasons. While India has grown at an impressive pace of 8 per cent plus, the state has grown at around 6 per cent. To reap the benefits of economic growth, investments in the state need to be encouraged keeping ground realities in mind. There is a need to develop social and physical infrastructure, create industrial clusters and develop
Kolkata as the financial hub and knowledge capital as it once was. The government needs to invite financial institutions to set up offices in Kolkata, like it happens in Mumbai. It should also create ‘centres of excellence’ through PPP to develop Kolkata as a knowledge centre.