Explained in the Interim Budget for 2019-20 the government announced a scheme to provide income support of R6,000 per year for farmer families whose land holding is less than two hectares. Congress party has announced that if voted to power it would provide Rs 72,000 annual free cash to 20 per cent poorest families in the country. 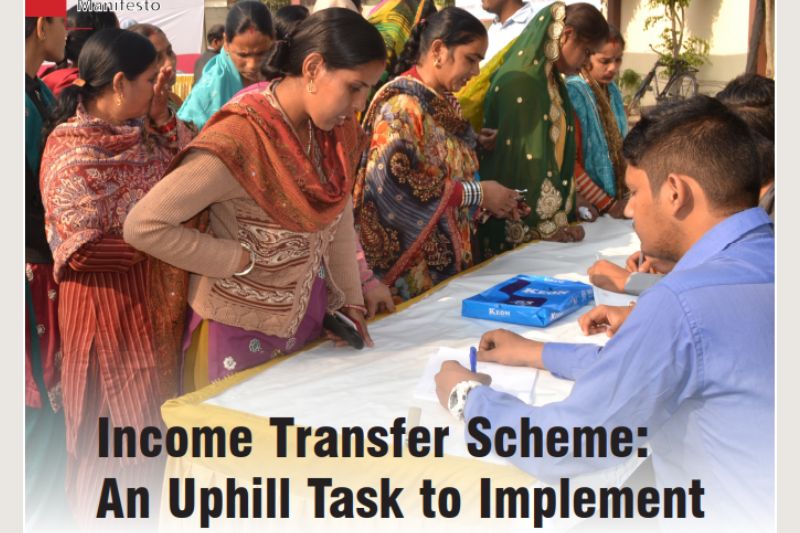 In the Interim Budget for 2019-20 the government announced a scheme to provide income support of R6,000 per year for farmer families whose land holding is less than two hectares. Congress party has announced that if voted to power it would provide R72,000 annual free cash to 20 per cent poorest families in the country.

Both the schemes come with conditions. Those conditions would make the identification and authentication of beneficiaries very challenging. Once identification is done delivery of money would also be a big challenge.

It is assumed that the beneficiaries would be identified on the basis of Aadhaar as is the case for other major government social security scheme.

However, Aruna Sharma, Development Economist and Former Secretary, Government of India, points out that the Aadhaar data is for individuals while the schemes are meant for households.

She said the database of Socio-Economic Caste Census and National Population Register would be more helpful in identifying the targeted beneficiaries. She further added that eight states have prepared verified household database that could also be useful.

“We have 8 states in the country that have gone ahead with the common household database which is verified. Verified in the sense that whether they are BPL, SCs or STs. This verification throws up the entitlement. Once you have identified that there’s no duplication then the job of Aadhaar is over,” said Sharma, who is also a Distinguished Fellow of SKOCH Development Foundation.

“You have an account of a person which is also seeded once, you just pick up the entitlements, decide what you want to pay so the bridge is already made and it doesn’t matter whether a Mercedes or a motorcycle travels on it,” she added.

“The basic problem with doing direct income transfers is that of identifying the beneficiaries correctly and delivering them the benefits. The problem is further magnified because cash transfer only means that the government has failed to provide goods and services but the demand for them doesn’t go away and only increases,” said Sameer Kochhar, Chairman, SKOCH Group.

N C Saxena, Former Secretary, Government of India, emphasised on the need for creating a master list of beneficiaries. He said the beneficiaries could be selected from the master list depending on the scheme while the criteria for poverty and other eligibility need to be constant.

“We have too many lists of potential beneficiaries because there are many programmes,” said Saxena adding the programme wise identification of beneficiaries lead to the wastage of resources.

“If you look at the MGNREGA data, states like Bihar spend only about R600 per year per rural poor while Kerala spends R16,000 per poor person each year. The banking structure in the poorer states is so weak that to have more and more cash transfers is certainly the need of the day but we really need to improve all these factors because of which we need to ensure that transfers happen in a systematic manner,” Saxena said.

Providing a legal perspective, Pratibha Jain, Partner, Nishith Desai Associates, said that government policy should be constitutionally valid, transparent and it shouldn’t violate fundamental rights. Jain said that while the government is trying income transfers through bank accounts but if people are not able to use the accounts due to lack of financial literacy then what is the use of Aadhaar and other technologies which were touted as panaceas for everything.

“In terms of linking it to bank accounts and financial inclusion, even if you create the linkages if the people on the ground don’t know how to use these accounts in the absence of financial literacy, these fundamental issues are what the government needs to focus on. The last mile is important. If the last mile itself fails, then your whole financial inclusion fails,” Jain said adding that we should have added more business correspondents around the country.

She said that the government should focus on these issues rather than right to privacy or technology companies taking away rights of citizens. The government should worry about things that affect less than 10 per cent of population later but first its priority should be financial inclusion.

“The objective of UIDAI was to empower the citizen and not the state,” he said listing benefits of Aadhaar.

“Aadhaar has been a blessing for Indian citizens. Until recently, there was no unique number allotted to the citizens of the country. We had a fragmented database but a guy coming from a local town in a big city had nothing but a ration card which wasn’t acceptable anywhere in the metro cities. He feels more empowered now with the Aadhaar card,” he said.

Sansi argued that Aadhaar is not a centralised system as far as benefits are concerned. “It has been more than adequately protected. We talk about third party databases when Aadhaar gets integrated. When we are trying to link bank account to an Aadhaar card, no banking or mutual fund information is travelling to the users. We have faced a lot of frauds due to impersonation and fake documents ranging from passports to ration cards,” he added.

However, Kaliya Young, Fellow, New America India-US Public Interest Technology, and an expert on identity systems, warned against the dangers of multiple master databases such as state resident data hubs and said that citizens’ data should not be queried again and again for providing the same welfare or service.

“One of the things that surprised me is that so many things are being linked to Aadhaar in a centralised way. So you are creating giant databases of information. UIDAI is supporting states building massive databases about their citizens. India is a developing state working for the welfare of its people. There may be trade-offs that need to be made about how much data you are collecting about citizens you are trying to support,” she said.