Taking Healthcare to the People

Nalam Nagalaxmi, aged 19 years, discontinued her schooling after Class 9, having been continuously belittled by her classmates for a squint in her eyes. Today, after corrective surgery was performed by an eye institute, with the costs being borne by the State Government under its Rajiv Aarogyasri Scheme, normalcy has been restored to her eyes. 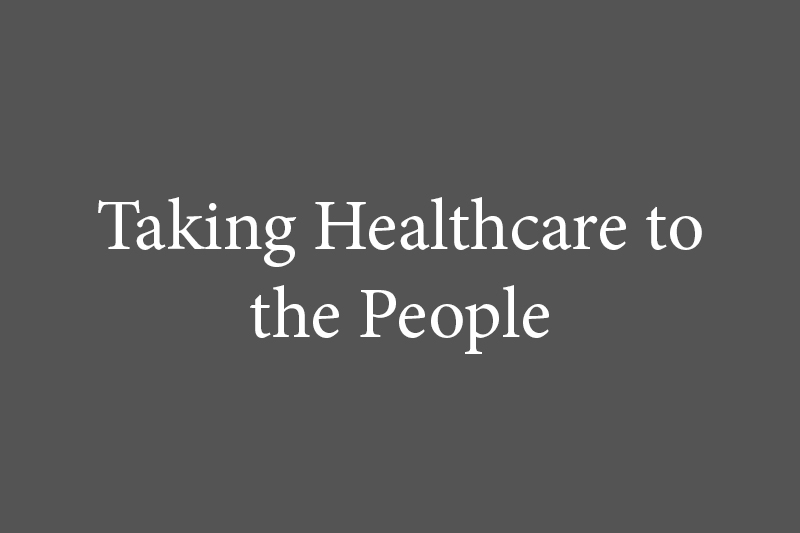 Nalam Nagalaxmi, aged 19 years, discontinued her schooling after Class 9, having been continuously belittled by her classmates for a squint in her eyes. Today, after corrective surgery was performed by an eye institute, with the costs being borne by the State Government under its Rajiv Aarogyasri Scheme, normalcy has been restored to her eyes.

The fact that their son was struck by `meningitis’ hit the daily wage earners, Pravallika and Suresh of Narpala village, like a bolt from the blue. They had almost given up hopes about his survival, especially as the doctors they went told them that treatment would cost about Rs 80,000, a sum they had little hopes of mobilising. But when they contacted the local primary health care doctor and Aarogya Mitra, they were immediately issued a white card and informed that all cost for treating their son would be borne by the State Government.

The Rajiv Aarogyasri Scheme, a unique community health insurance scheme being implemented in Andhra Pradesh from April 1, 2007, today covers over 65 million BPL (below poverty line) people in the state. Initially implemented in 13 districts, the scheme has been extended to all 23 districts, including Hyderabad, since July 2008.

The Rajiv Aarogyasri is the flagship of all health initiatives of the State Government with a mission to provide quality healthcare to the poor. In order to facilitate the effective implementation of the scheme, the State Government has set up the Aarogyasri Health Care Trust under the chairmanship of the Chief Minister. The trust, in consultation with the specialists in the field of insurance and medical professionals, runs the scheme.

A total of 887 diseases are being covered under this scheme, with all beneficiaries given a white card that entitles them to undergo any surgery and treatment costing up to Rs 200,000 in any empanelled super specialty hospital. The beneficiaries of the scheme are the members of BPL families. To get the insurance card, all that the beneficiaries, the BPL families and the low income groups, including the middle classes, have to do is to produce their ration cards. The benefit to a family under the scheme is on floater basis, i.e. the total reimbursement of medical care, including surgery, can be availed of individually or collectively by members of the family. The scheme is seen as a major boon to the rural poor who hitherto did not have the benefit of specialty medicare.

The scheme is being implemented through an insurance company, selected through a competitive bidding process. The objective of the scheme is to improve access of BPL families to quality medical care for treatment of identified diseases involving hospitalisation, surgeries and therapies through an identified network of healthcare providers.

The scheme is a public private partnership (G2B and G2C models) between the Insurance Company / TPA, the private sector hospitals and the State agencies. Strict protocols have been levied on the treatment. There are 887 listed medical and surgical packages and the cost of treatment is fixed by the Trust’s panel of doctors. Behind the model is a holistic approach to healthcare, ensuring that people are given free health diagnostics and treatment by the network hospitals.

Health camps are the main source of mobilising the beneficiaries under the scheme. All the network hospitals are conducting regular free health camps, which are held as per the schedule and place given by the Trust.  In fact, over 70 per cent of the referrals under the scheme are from these camps.

Treatment is cashless for covered procedures. A BPL beneficiary can go to a hospital and come out without making any payment for the procedures covered under the scheme. The same is the case for diagnostics if eventually the patient does not end up undergoing surgery or therapy. Hospitals have to conduct at least one free medical camp in a month, thereby taking advanced evaluation to the doorstep of the patient.

The diagnostics, operation and the subsequent follow-ups including food and transportation are provided absolutely free for the patient. The entire process workflow including pre-authorisations, claim processing and payments are completely automated through ICT solution with web-based online portal www.aarogyasri.org.

This dynamic and transparent system has established an effective control and monitoring mechanism and has thereby created a corrupt-free environment. The health insurance card, with a biometric reader, also allows the hospital’s computers to download the patient’s medical history, place of origin and so on.

All primary health centres (PHCs), which are the first contact points with the BPL families, area/district hospitals and network hospitals, have been provided with help desks manned by Aarogya Mitras to facilitate the illiterate patients. The government has formed a team of 72,000 Aarogya Mitra volunteers to guide the beneficiaries about the insurance benefits. The Mandal and Zilla Samakhya are the nodal agencies that select the Aarogya Mitras.

The insurance company has to enter into an agreement with the Zilla Samakhya to hire the services of local persons in each PHC/CHC/Area Hospital/Government Hospital. It also makes a consolidated payment for the Aarogya Mitras through the Zilla Samakhya.

While critics of Aarogyasri say it is limited to tertiary healthcare while the pressing concerns are still in primary healthcare delivery. However, the fact is that an insurance company and government and private hospitals have created a framework for a genuine, health insurance scheme.