Providing quality education to children from Classes I to XII under one roof in over 1,000 schools, catering to nearly 950,000 students on a regular and sustainable basis can challenge the organisational and managerial capabilities of any department, especially if it is government-run. But the Directorate of Education, Government of NCT of Delhi, has successfully taken on this task, using ICT enabling governance and academic innovations to address issues that have a direct or an indirect bearing on classroom teaching, students’ performance and accountability of the principal, teaching staff and the office personnel. 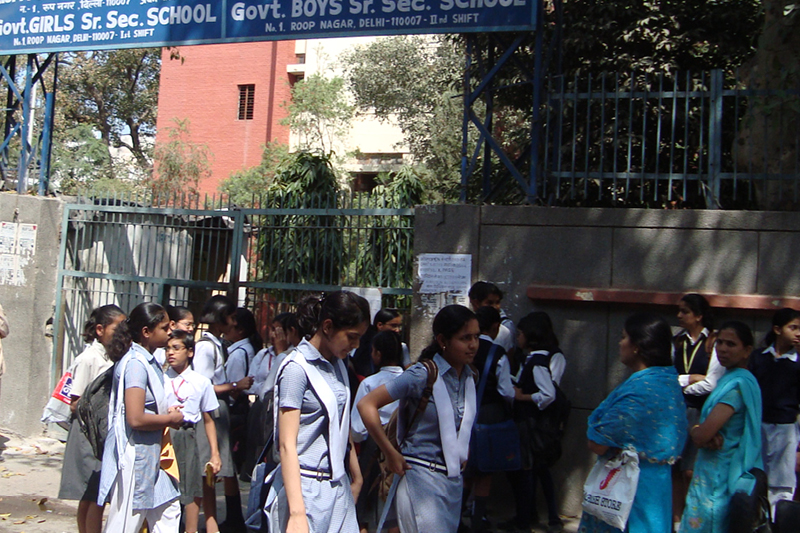 Providing quality education to children from Classes I to XII under one roof in over 1,000 schools, catering to nearly 950,000 students on a regular and sustainable basis can challenge the organisational and managerial capabilities of any department, especially if it is government-run. But the Directorate of Education, Government of NCT of Delhi, has successfully taken on this task, using ICT enabling governance and academic innovations to address issues that have a direct or an indirect bearing on classroom teaching, students’ performance and accountability of the principal, teaching staff and the office personnel.

The city’s population is increasing and there are a large number of people who cannot afford private schools. But despite this, the government noted that enrolment in government schools was not increasing; it was stagnant. Also, the level of pass percentage of students in their final years was disturbingly low. Almost one out of every two students appearing in the board exams was failing. This was a vicious cycle; students were failing, public perception of the government schooling system was not good, and as a result, enrolment was declining. In 2002, it was decided that we have to go in for complete revamp, basically a paradigm shift from the existing approach.

The government wanted to bring in a system where it was not talking about students in numbers or percentages. It wanted to talk of them as individuals. The system had to be transparent, fast, effective, addressing the concerns of the teachers, the students and the general public. The government wanted to have in place a system that told it what was happening not only at the directorate of education but in every school across all districts in the Capital. Accountability had to become the norm. There are about 40,000 teachers in government schools and unless each one of them knew that they would be accountable for their results and that their performance was being monitored, the system would not really improve. Thirdly, at the level of students, the idea was to monitor that how each one of them was performing.

The initiatives taken by the directorate included interventions for personnel and office management, such as an employee information system, transfer posting module, finance module, library management, infrastructure module, etc. As a result, there has been perceptible change in both administrative and academic output of the department, with human intervention and discretion being minimised, resulting in a fair, transparent, accountable and responsive system.

The web-based system that is now in place initially captured almost the entire workflow and processes of the Directorate; provided all information in the required format at the right time to facilitate decision-making and helped ease the workflow processes. Subsequently, the programme was extended to usher in academic reforms touching the issues that directly affect classroom teaching, student performance and accountability of teachers.

The initiatives include admission of students and tracking their details, school information, including geographical boundaries, student feedback, inspection of schools, assessment of classroom teaching, online attendance of students through various web-based modules, besides continuous and comprehensive evaluation of student’s performance and maintenance of electronic documents, including annual confidential reports (ACRs). The entire work flow of the department has been woven into the system such that the users have to work through the system for producing deliverables like marksheet of a student, rather than entering a data arrived at after a process has taken place.

Says Vinita Shankar, Principal, Sarvodya Kanya Vidaylaya, Shakti Nagar, “the benefits (of the new system) are immense. Everybody in the Directorate knows how many students are present on a particular day. They can compare and see which school is working and which is not. The attendance is sent online every morning.” Adds  Neelima Puri, a teacher, “we are now aware of how the other schools are performing. So it helps me in setting up new targets. The targets are more specific now. Moreover, the result analysis is also showing us the subjects we are weak in, so we are able to take corrective measures.”

Trying to initiate new innovations in a large organisation can be taxing, but in this case, there was a high level of acceptability and teachers were actually looking forward to the new system. They find it extremely interesting to reduce everything onto computers. They loved the whole training concept. And the one crucial area that is very important in the high acceptability of IT has been its transparency.

Another concern is of teacher transfers. There are around 40,000 teachers in over 1,000 schools. This gave rise to a large element of subjectivity in matters relating to transfers. So, earlier while many teachers would be in schools closer to their residences, others would be perpetually shifted. But thanks to IT and the new software, the whole system of transfers is now on the net. Now every year, the teachers are allowed to request for transfers or changes, which the software is able to analyse so that the teachers are able to gain maximum satisfaction and the system has today become enormously popular.

In a bid to make learning stress free and joyful, the project also incorporates interventions such as computer-aided learning in multimedia classrooms. This form of learning is extremely popular with students. Says a teacher, “children find it very interesting to come and watch things on TV. It’s like a cartoon show going on for them. So they learn as well as enjoy it at the same time. That way attendance has also increased. Also, it is a great teaching aid for us.” Bhoomika, a student at one of the schools says, “through this medium we are shown actual pictures so that we come to know of things like the colour of soil and farming process. This is almost a real-time experience.” Adds another student, “through multimedia, we were once given a guided tour of the entire universe sitting in a rocket. It was quite interesting.”

The CBSE results for the Standard X Board exams have increased dramatically from 48 per cent in 2005 to 84 per cent in 2008, a massive increase of 36 per cent in just three years, a task that would have otherwise taken over 16 years. That it actually took only three years to reach these levels proves the effectiveness of the reforms that the Delhi Government have introduced. There is also a decline in drop-out rates and learning levels have increased.

Teacher training also forms an integral part of the scheme so that they can impart knowledge using multimedia content to the students and also to become master teachers and train other teachers.  More children do pass now and there is no difficulty. The problem is the lack of teaching which is responsible for their poor performance. Around two years ago, only 48 per cent of students were passing class 10th which meant that 52 per cent failed. What IT did was to give the macro picture. Training sessions are now conducted on a regular basis.

The success of the initiative is evident from the fact that the Directorate of Education has won four National e-Governance Awards in the last three years. Through the deployment of ICT, it is expected that it will boost the enrolment, increase quality of education by standardisation, make the learning environment interesting and help in retention of students.