Window of Opportunity at Tineri

Lower castes did not have any bank account in this village. But Punjab National Bank (PNB) came here with Zero Mass Foundation and today over Rs 500,000 has been deposited in the village bank. This is all done by PNB. Today if you go to open up a bank account, it takes Rs 1,000 and an account is only opened after 10 days of to and fro travelling. At least here there is the comfort that a woman can come here and deposit Rs 10,” says Rakesh Kumar, Gram Pradhan, Tineri Village. 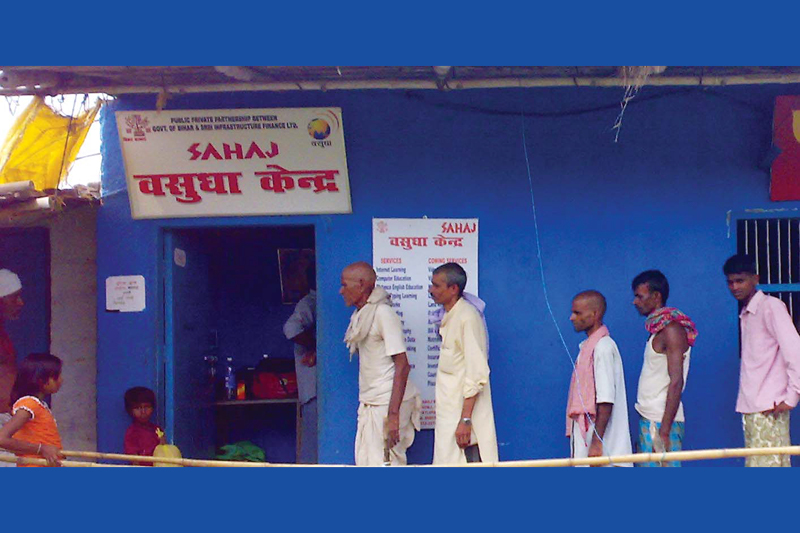 Lower castes did not have any bank account in this village. But Punjab National Bank (PNB) came here with Zero Mass Foundation and today over Rs 500,000 has been deposited in the village bank. This is all done by PNB. Today if you go to open up a bank account, it takes Rs 1,000 and an account is only opened after 10 days of to and fro travelling. At least here there is the comfort that a woman can come here and deposit Rs 10,” says Rakesh Kumar, Gram Pradhan, Tineri Village.

Tineri situated about 65 km from Patna under Masaurhi block of Patna district in Bihar is the second such village in the country after Neemrana in Alwar district of Rajasthan where PNB had decided to set up the branchless banking facility to serve the poor who had no idea about the diversified banking services.

Importantly, Panchayati Raj Institutions have been involved in Tineri as business facilitators. As PNB Chairman and Managing Director K C Chakrabarty says, “When they are involved, the panchayat says we will bring the people to open the bank account, we will identify them, we will arrange for their KYC and we will see that they don’t go to the money lender and they come to the bank.  This initiative has to come from the local government.  Banks can only be a catalytic agent but ultimately it has to have the peoples’ participation.”

The Pradan led a padyatra through the village accompanied by drum beating to inform people about the new banking facilities. The facilitation role played by the panchayats in creating an enabling environment for the bank so as to link the financially excluded people with the bank, organising the un-organised sector of the population by developing SHGs and assessing the genuine credit requirements of the entire panchayat for having income generating activities, has been a unique aspect of this project. This holds lessons for others as in any state, the panchayat is the key village level institution.

Tineri is one of the 27 pilot projects (20 in rural areas and 7 in urban areas) to be launched by PNB across 13 states in the Indo-Gangetic Belt. The objective of PNB’s financial inclusion initiatives is to cover the Indo-Gangetic plain, where the bank has more inherent strength, not only in terms of outreach but infrastructure availability also. Out of 20 rural pilot projects, 6 projects have already been launched at Neemrana in Rajasthan, Tineri Panchayat in Bihar, Matki Jharoli in UP, Gararu in Bihar, Mauli Jagran in Chandigarh and Kullu in Himachal Pradesh.

According to Chakrabarty, the Tineri initiative is not only a part of the bank’s social responsibility, but also as a ”holistic approach” towards providing basic banking facilities to the poorest of the poor in all corners of the country. The bank sees financial inclusion as a distinct opportunity and business proposition for future growth. The bank hopes that the bank’s customers will prosper under financial inclusion, thus making the bank a beneficiary of their prosperity.

In Tineri village and its surrounding 12 villages today, financial inclusion is complete and everybody has a bank account.  Everybody has a small overdraft facility and if they have a genuine credit requirement, then the borrower need not go to the moneylender and suffer exorbitant interest rates.

”Though this is a pilot project to access the acceptability of basic banking services to the remote villagers, most of whom are illiterate and have little or no idea about the value for money, we hope this would soon open up a new window of opportunity for them”, Chakrabarty opined.

Under the project, each family in the village is provided with a biometric card, a thermal filter and a Near Field Communication (NFC) mobile handset at a total cost of only Rs 110, at least half of which is expected to come from the state government as subsidy. In return each customer is allowed to open a savings bank account even with zero balance in the branchless banking system. All transaction can thus be made with the biometric card and the NFC.

Chitranjan Kumar had to wait till he was 28 to open a bank account. “My account was opened in 2008 and I am very happy. Till the age of 28, I didn’t have any bank account. Now PNB has come and opened the account at my doorstep. I didn’t have to pay any money… and my account has been opened and I have the card,” he says.

The ease of use is corroborated by Anupam Kumari, who says “it is very convenient. Earlier, we used to go to the masauri (money lender) but now all these things are done at the doorstep. Earlier it used to take 2-3 days but now it is done instantly.”

Rajeev Kumar of Zero Mass explains how. “Earlier we used to open the account through laptops but now we have switched to mobile-based technology. With the help of the mobile, we open the bank account and do the transaction as well. For this, we just require little bit of power for just charging the phone. With this facility we can open the bank account sitting in anybody’s home and they don’t have to go to the bank, they get their service in the village itself.”

But, as Team Inclusion found out, it is the credit facility that is changing people’s lives. Noorjahan Khatoon of the Bijaura SHG informed us that the bank had given them a loan for making agarbatti. “We opened up a small factory for making agarbatti. We all do the same thing and show the profit to the bank of the work we do. Whatever we earn as profit, some we give to the bank, some we give to the store from we make purchases and the rest we keep with us.”

Recently turned dairy farmer, Jagdish Prasad explains: “Earlier I didn’t have anything, then PNB came and they started issuing loans to groups. We formed a group and bought 10 cows and because of this, all of us are benefiting.”

Dayanand says he was just an ordinary farmer caught in a bind when one of his sons cleared the AIEEE. “I applied to PNB for education loan when my first son got admission. Last year, my other son also competed in the engineering exam and cleared it. Again I applied for the education loan and I got it. I am very thankful to PNB.”

Another SHG member, Meena Devi says, “with the bank in our village, we save and deposit in our village itself. The profit is used to meet our group’s needs. Now we don’t have to go the moneylender who used charges 10-15 per cent.”

Importantly, all SHGs of Tineri are being imparted training for knowledge building and entrepreneurship programme under various sectors through RUDSETI Patna. The same is also being extended to Nadaul and Punpun panchayats.

Two things have been done in Bihar. First, linking the people with the bank through the financial inclusion programme.  Second, a tie-up which enables funding all the e-Seva Kendras through village level entrepreneurs. Chakrabarty adds, “we would like all these village level entrepreneurs who are funded by PNB, upon a due diligence, become individual business correspondents (BC).  That means in one stroke, we are covering 8,000 villages and providing banking facilities.”

To make PNB a household name in Bihar, the Bank has planned to establish an e-kiosk in each panchayat of the state with the joint collaboration of SREI Infrastructure Finance Ltd. The first such project has been launched at Panapur village. Besides providing other services as per the requirements of the Panchayat, the kiosk operator or Village Level Entrepreneur (VLE) will work as a business facilitator for the bank for providing all types of banking services to the villagers. The success in Tineri has emboldened the bank to go ahead with its plans to bring about financial inclusion in Buxar, Rohtas, Gaya and Bhojpur districts.