In the course of the e-governance programme, it has been found that at the bottom level, particularly at the point of delivery, the dividing line between egovernance and societal inclusion or economic inclusion and financial inclusion or in general use of ICT for developmental purposes breaks down. 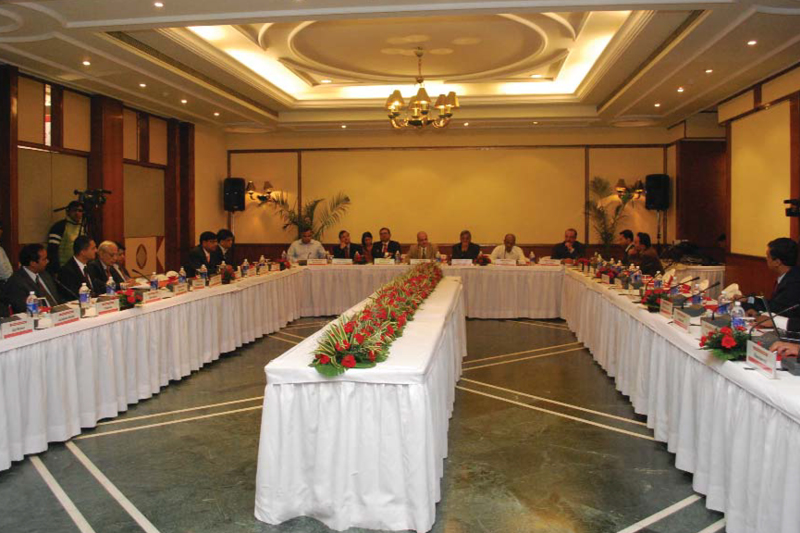 Participants at the ‘Roundtable on Interoperability and Innovation’, organised by Skoch Development Foundation in New Delhi on November 26, 2008

In today’s heterogeneous computing environments, need for integration of working among disparate government agencies and businesses, the emergence of Web services and service-oriented architectures, interoperability has become a critical business and IT need. At the point of service delivery, if we want innovation to happen on a large scale, and for the benefits of any innovation to be available across the length and breadth of the country, we have to create an environment in which various process and applications interoperate to enable the delivery of services at anytime, anywhere through multiple delivery channels as per the choice of consumers. This was main theme of discussion among domain experts who had gathered to take part in a focus group on “Innovation and Interoperability” organised by Skoch Development Foundation in New Delhi recently.

From an e-government perspective, interoperability refers to the collaboration ability of cross-agency services for citizens, businesses and public administrations. Exchanging data can be a challenge due to language barriers, different specifications of formats and varieties of categorisations.

In the course of the e-governance programme, it has been found that at the bottom level, particularly at the point of delivery, the dividing line between egovernance and societal inclusion or economic inclusion and financial inclusion or in general use of ICT for developmental purposes breaks down.

All of them converge at the bottom tier. Not only do they converge but this convergence also leaves room for a mind-boggling variety of innovation in terms of business models, in terms of technology innovations, and in various ways in which technology is actually leveraged to make these things happen. Clearly, interoperability is going to be a hugely important area going forward to achieve inclusive development.

Initiating the discussion, R Chandrashekhar, Special Secretary in the Department of Information Technology (DIT), said the challenge was to leave as much flexibility and looseness as possible to encourage innovation and have only as much reliance on standards to facilitate interoperability.

Chandrashekhar cited the example of two communities which were heavily into use of ICT– one is the whole e-governance community across the government and the other is the financial sector. By and large, each of these communities went about everything on their own without really bothering too much about the other community. But increasingly, he said, it became clear that beyond a point e-governance could not proceed without having a strong link with the financial sector and equally the financial sector had to look at evolving technology based strategies for achieving the policy mandate of financial inclusion. Both also found that they had reached a point where they could no longer plan to the last level entirely on their own. “In short, we found that there was strong degree of inter-dependence emerging clearly between these sectors and both needed to work together,” he said.

Santanu Mukherjee added that the issue of intellectual property to the discussion as he said, wherever there is systematic controlled innovation or R&D effort, intellectual property went hand in hand. “So, it is important to see how we can balance the interoperability requirements and the incentive to innovation,” he pointed out.

Speaking about some of the innovation types relevant in the context, Deepak Chopra of SAP started with process innovation where the key objective is to make sure that citizens are included and they can participate in those processes. The second type is information innovation where contextual information delivery is very important. The third type of innovation is service delivery innovation itself, he said, where depending upon the profile of a particular citizen one should be able to expose a subset of available services using a single window of access. The last type was social engineering innovation; that is, making sure that as the system progresses, the effectiveness of the system becomes better and better.

Taking off from here, the participants discussed the different types of interoperability that should be considered in the context of inclusive services delivery. There was agreement that interoperability should be based on inclusiveness. The stance should not be one where we adopt standards so exclusive that it basically stops and raises a high barrier to the adoption of the leading edge technologies for effective usage in inclusive service delivery.

Vijay Kapur from Microsoft in his presentation said the first part i.e. diverse systems, is about technology and essentially it is applications and infrastructure being able to talk to each other or technical interoperability. Then there is data interoperability which is the semantics of the information that you need to exchange. A third component is process or operational interoperability; this is concerned with people.

Clearly, processes, rules, regulations, organisational structures are very diverse and don’t change very fast. On the other hand, applications and infrastructure are subject to very rapid change that is what technology is all about. There is an implication in this. “If we focus too much on the applications and infrastructure perspective,” said Kapur, “we are likely to be outpaced by technology and how it is going to be evolved. On the other hand, governments need to focus very deeply on data and semantics because that is at the heart of it.

Interoperability can have important economic consequences, such as network externalities. If competitors’ products are not interoperable (due to causes such as patents, trade secrets or coordination failures), the result may well be monopoly or market failure. For this reason, it may be prudent for user communities or governments to take steps to encourage interoperability in various situations.

Just as interoperability is multifaceted and multilayered, so are the approaches for dealing with interoperability. These range from unilateral design, reverse engineering, disclosure of information, public procurement, and technical collaboration.

Kapur felt that we need to focus very strongly on metadata standards which are actually going to enable the connectivity for all e-government service delivery. Making a strong point, Rajeev Chawla, the man behind Bhoomi, said “we should not choke innovation at this point of time and we should ensure that software systems talk to each other.“ He warned that the standards systems whenever they are written can be highly misused to exclude people, to exclude organisations. So while software systems can have features which are unique to them but at the same time it should not come in the way of enabling data interchange.

Alok Bhardwaj from Canon India recommended that for hardware standards there should be a customer or a user requirement specified, but there has to be a mechanism in the procurement area which can differentiate between different models and then look at something which suits that particular requirement.

The seamless interoperability and what is required for that is an important thing and this aspect ought to be developed when standards are being discussed.

In this regard, J Satyanarayana, CEO, NISG, gave an example where interoperability could lead to innovation. He described the eBiz project where the challenge is to provide possibly several thousands of G2B services through a single platform with eBiz being the facilitator. 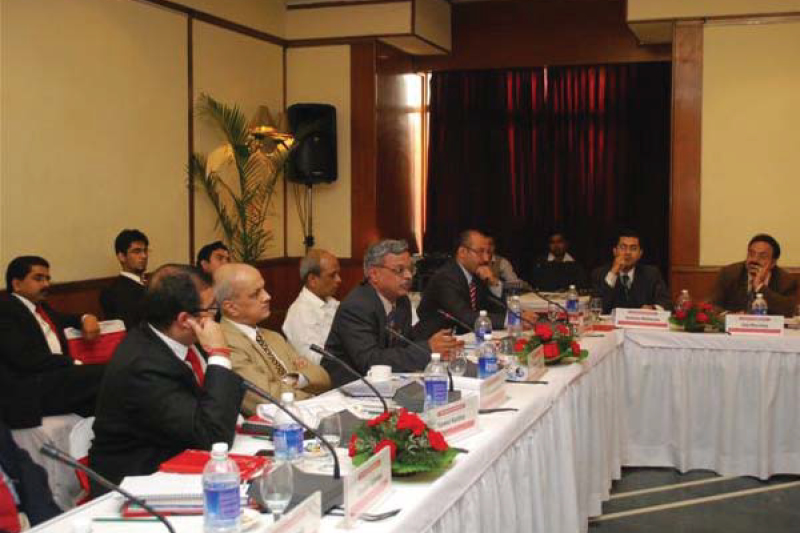 Participants at the ‘Roundtable on Interoperability and Innovation’, organised by Skoch Development Foundation in New Delhi on November 26, 2008

Ashis Sanyal from DIT felt that there already seems to be consensus on shifting from hardware-software standardisation to the process. Another point of discussion was the fact that standards too can be dynamic.

From an industry point of view, Niraj Prakash, SAP, pointed out that we need to see how we can bring in a policy that actually promotes competitiveness amongst various providers which automatically will take care of the innovation and bring the best results to the government.

In sum, it was widely felt by participants that one should look at minimal standards which creates that balance for government which Chandrasekhar has been talking about and not specify mandatory standards and desirable standards which lead to denial of technology or inhibit service delivery innovation.

If NeGP is to be managed as a programme and not a collection of assorted projects which are unconnected with each other then the whole area of standards and interoperability acquires a great deal of significance and importance. – R Chandrashekhar, Special Secretary, MoCIT

Coordination can only be achieved if there is an aspect of interoperability enabled on all the internal systems–otherwise for service delivery innovation, there is no way you can present a single window. – Deepak Chopra, SAP

When you are setting a standard, you have a consensus as to what will contribute to it and if there is any issue which is protected by intellectual property you have a system where you say okay, we will license it in reasonable terms. – Santanu Mukherjee, Legal Expert

Interoperability enables systems to work together which create new opportunities for others to innovate on top of that platform. Essentially, interoperability is nothing but connecting people, data and diverse systems. – Vijay Kapur, Microsoft Corporation(India) Pvt Ltd

You not only need standards but you need a process which will keep updating or suitably evolving these standards. – Cr Muthukrishnan, Former Director, IIT-Madras

Please write minimal standards, let innovation be there, let software have features which are unique to them but at the same time at the interface layer level they allow the data interchange takes place. – Rajeev Chawla, Commissioner, Government of Karnataka

It is time now to shift from hardware software standardisation to process standardisation. Once that is given universal priority then within that there may be priority of the goals and time horizon. – Ashis Sanyal, Senior Director, Department of IT