The Resettlement and Rehabilitation Bill 2007 represents a major paradigm shift in the process of acquisition of land. However, this shift will remain incomplete till so long as the Panchayati Raj Institutions (PRIs) are not actively associated with the process of land acquisition, resettlement and rehabilitation at its every stage. The Panchayats have the knowledge domain and they have to be consulted during the stage of survey, the formulation of the rehabilitation plan and its implementation. 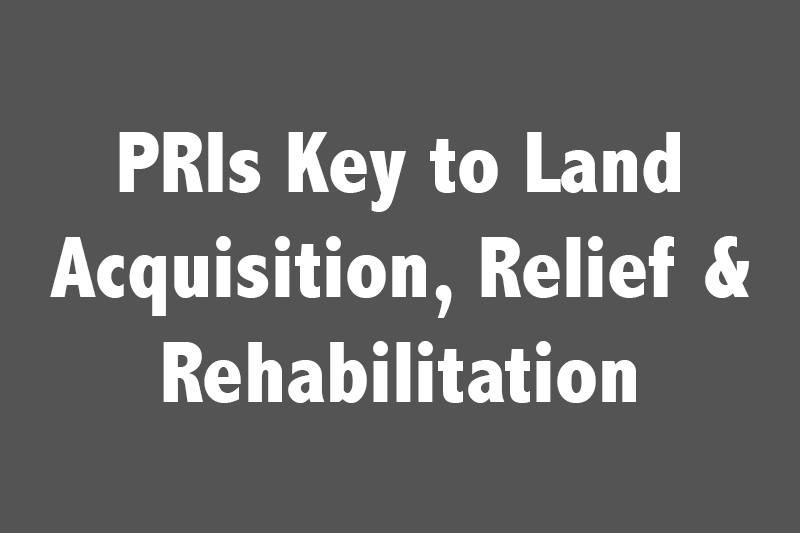 The Resettlement and Rehabilitation Bill 2007 represents a major paradigm shift in the process of acquisition of land. However, this shift will remain incomplete till so long as the Panchayati Raj Institutions (PRIs) are not actively associated with the process of land acquisition, resettlement and rehabilitation at its every stage. The Panchayats have the knowledge domain and they have to be consulted during the stage of survey, the formulation of the rehabilitation plan and its implementation.

There is a wide role for Panchayats in the acquisition and rehabilitation process. The States have endowed the Panchayats with powers and authority under the respective State Panchayati Raj legislations and Panchayats are in a position to shoulder all the responsibility assigned to them under the Constitution. Panchayati Raj is an inseparable part of our system of governance. Plans for economic development and social justice which are to be implemented at the level of district, block or village should be implemented by the elected Panchayats. It is essential that the Panchayats are fully involved and encouraged to shoulder the responsibilities assigned to them. As Panchayati Raj is a State subject, it is up to the States to decide the steps that they need to take to devolve powers to the Panchayats. Most of the states are in the process of completing the task of devolution of powers, as per Article 243 G of the Constitution  (See Box).

The Government has also enacted the ‘Panchayat Extension to the Scheduled Areas (PESA) Act’ in 1996. It is one of the progressive legislations for the Adivasi regions, providing for self-governance and recognising the traditional rights of indigenous communities over their natural resources. The main rationale behind the Act is to preserve the tribal population from exploitation with an active involvement of the Gram Sabha. Gram Sabha is a body constituted under the provisions of the Constitution and there is no doubt that they would play their part with full responsibility in the rehabilitation process i.e. selection of the place of rehabilitation and examining the facilities, amenities available therein.

As per PESA, the Gram Sabha will be involved in approval of development plans, and programmes, land availability and rehabilitation of affected persons, and has given control of land, forest and water in the hands of tribal through the Gram Sabha. The Act entrusts the Gram Sabha with the following:

Section 4.d: Gram Sabha shall safeguard and preserve the traditions and customs of the people, their cultural identity, community resources and the customary mode of dispute resolution

Section 4.e (i): Gram Sabha shall be responsible for approval of plans, programmes and projects for social and economic development

Section 4.e (ii): responsible for the identification or selection of persons as beneficiaries under the develo pment programmes

Section 4.i: Consultation with Panchayat prior to land acquisition and Rehabilitation & Resettlement activities in the scheduled areas

In particular, Section (4) (i) of the PESA Act, 1996 clearly shows that in case of acquisition in the schedule V areas, the provisions of PESA should be strictly adhered to which was enacted to safeguard and preserve traditions and customs of tribal communities and prevent alienation from their homelands.

Once an area is notified as an affected area, a baseline survey at the village level is to be conducted to obtain details of persons likely to be displaced. This information would detail the economic background of the residents of the affected area in terms of landholding, occupation, caste and tribe details and also vulnerability, e.g. disabled, widowed,

abandoned, etc and would form the basis for the draft resettlement and rehabil itation scheme or plan. The Gram Sabha should be consulted during the conduct of the baseline survey and the findings ratified by it. This is in keeping with the provisions of section 4 (i) of the PESA Act, 1996as well as section 4 (e) of the said Act.

There should be a provision for display of notification for land acquisition in the Gram Panchayats, in the Land Acquisition Amendment Bill. The opinion of the villagers should be sought after the Panchayat has been formulated and explained to them. The following role can be envisaged for Gram Panchayats:-

As per Clause 8 of the Land Acquisition (Amendment) Bill 2007, the Social Impact Assessment Study shall be carried out in the affected area whenever land is acquired for public purpose involving physical displacement of 400 or more families in plain area or 200 or more families in tribal or hilly or DDP Blocks or areas specified in Fifth and Sixth Schedule of the Constitution.

For the Social Impact Assessment Study and rehabilitation whenever land is acquired for public purpose, specially in rural areas, it is important that the limit of two hundred families in hilly/tribal/scheduled area for the Social Impact Assessment Study should be flexible in the Scheduled Areas since the pattern of habitation in Scheduled Areas is different from plains. Ordinarily, tribal habitation are scattered and would comprise 30-40 households. In areas inhabited by primitive tribes, the number of households will be significantly less. Therefore, for the scheduled areas, the limit of 200 households should be flexible so that the provision becomes applicable even if it were less than the prescribed limit of 200 families.

As per Clause 5(1) of the R&R Bill, the social impact assessment report shall be submitted to the appropriate government for its examination by an independent multi-disciplinary expert group, as may be notified by the appropriate Government.

A Tribal Development Plan has to be prepared under Section 49 9(1) of the draft Bill, in case of involuntary displacement of 200 or more Scheduled Tribes families. This is meant to derive the course of action for settlement of Land Rights due but not settled and restoring titles of tribals on alienated land by undertaking a special drive together with land acquisition. However, such plan should also be prepared for displacement of less than 200 Scheduled Tribes families. This Tribal Development Plan should have the approved of the Gram Sabhas concerned in accordance with Section 4 (m) iii of the PESA Act, 1996 Gram Sabha.

There is a provision for consultation with the Gram Sabha or the Panchayats in the Fifth Scheduled in accordance with the provision of the PESA. This finds some place in R&R Bill but it has not been mentioned in Land Acquisition Bill 2007. This inconsistency will create confusion in implementing the provisions of the Act in true spirit. So a reference to PESA Act is necessary enclosing of Land Acquisition (Amendment Bill). In this regards, land acquisition measures should abide by the Section 4(i) of PESA Act, 1996.

In dissemination of information about the Land Acquisition Act, the role of Gram Sabha cannot be ignored. People should be made aware of their rights with regard to requisition of their land and in this a Forum of Panchayat bodies can play a very important role. The Gram Sabha should be informed by the competent authority of about the villages which will be affected, the purpose of land to be acquired the process to be adopted for land acquisition, the entitlement of affected and other legal matters.

According to Clause 9 of the Land Acquisition (Amendment) Bill, the Collector will commence the exercise of updating the land records, categorisation of land and its terms, survey and consistency of Land under acquisition, before the issue of declaration. The PESA Act includes consultation with the Panchayats and Gram Sabhas for verification of land records. Further, the Gram Sabha and the Panchayats at the appropriate level must be fully consulted as per the provisions of Section 4 (i) of the PESA Act prior to the formal land acquisition measures and the authentication of land records must necessarily be the domain of the PRIs for greater transparency and accuracy.

We cannot overlook the fact that being closest to the people, the Panchayats and their elected representatives have the feel of the pulse, the sufferings of the people and local conditions. The effectiveness of providing services through local bodies cannot be overemphasised as they know their real requirements, and are familiar with every nook and corner of the village and, above all, they are answerable to the people. Gram Sabhas can play a very meaningful role in selecting the beneficiaries, prioritising the beneficiaries to ensure gender and equity concerns and also in deciding the appropriate rehabilitation or reconstruction programme that is needed for the communities.

The involvement of Panchayats ensures greater transparency in working and fund utilisation than in execution carried out by central or state agency, many a times. Providing a village level plan for reconstruction and rehabilitation, classifying victims’ families and making arrangements for relief packages to reach them, managing temporary camps, and coordinating immediate health and hygiene works at village level.  Panchayats should be given powers to decide on technology, cost, location, infrastructure and beneficiary selection; and since they have a role in rural housing, primary health care, water and sanitation in many states, should be given these functions by the coordinating authority.

It is mostly agreed that the PRIs can play a significant role in Rehabilitation and resettlement provided they are vested with due authority, and are facilitated to do so through capacity building inputs and necessary institutional support. Adequate resources should be provided to PRIs to build up their capacities   and Sensitisation and training of PRI members on related areas will have to be promoted and capacity for the same should be institutionalised in the existing institutional framework.

Any legislation empowering the Panchayats on land acquisition will make a great difference because if the people at the grassroots are legally empowered to raise objections to land acquisition then there will be a fair chance that the Government may have to fight many stiff legal battles in order to proceed with development projects which would displace the poor and the marginalised from their hearth and homes. For greater transparency and accuracy, the Panchayats at the appropriate level Gram Sabha must be fully consulted as per the provision of section 4(i) of the PESA Act prior to the formal land acquisition. In a mature and responsible administrative system where power is in the hands of the people and their democratically elected local government institutions, relief operations, day-to-day running of civic services, providing medical assistance, etc., could best be done by the local government. 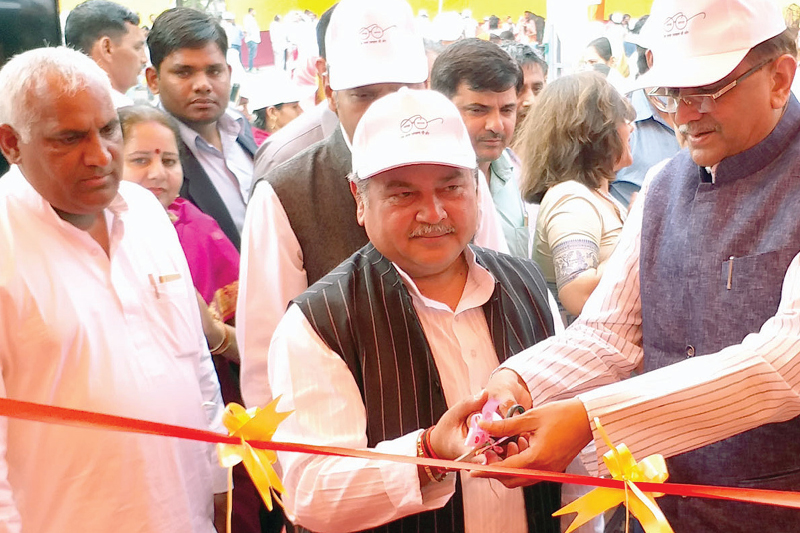