In an academic exercise to assess the transition happening in oil industry in India, with focus on recent developments, D C Patra finds out that the Indian oil and gas sector has registered phenomenal growth in both production and consumption. 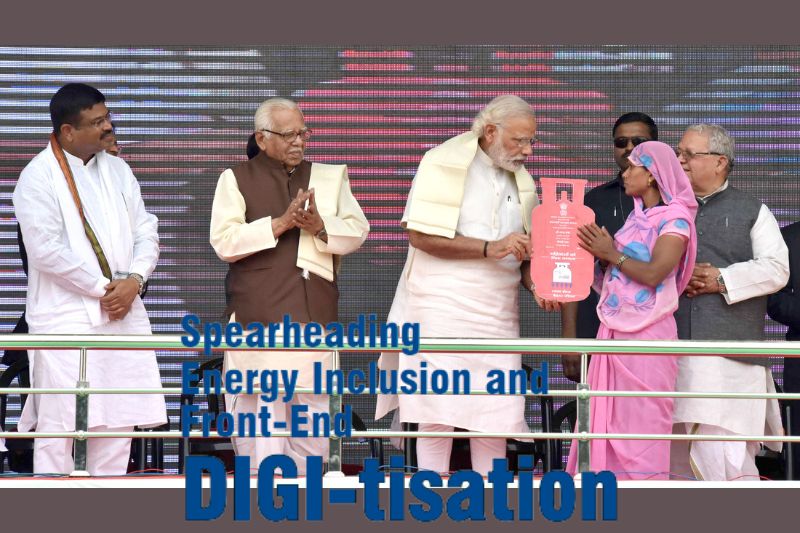 Two sterling developments standout from the myriad of initiatives undertaken in oil and gas segment during past five years of BJP led NDA regime at the Centre. Oil and gas sector during these years, witnessed initiatives that went far beyond the zone of business; skirting issues like energy security, liberation from socio-economic deprivation for bottom of pyramid section, correcting regional imbalance through infrastructure network, asserting geopolitical hegemony through oil diplomacy and arresting climate change through adopting low carbon energy sources. Each of these, and some more, initiatives emanated from deep concern for the fundamentals of India’s socio-economic imperatives and an abiding faith that Oil Industry in India, primarily constituted by Oil PSUs, can carry the torch of change from concept to conclusion.

Fundamental shift has taken place in the following two areas:

Table 1 presents all India per capita consumption of Petroleum Products and its annual growth pattern during different phases.

Per capita consumption grew the fastest at 7.3 per cent CAGR during past 4 years, taking 2013-14 as the base year. When we extend the base year back by 5-years, that is up to 2008-09, then the CAGR got reduced to 3.8 per cent. Further backward extension of the base year by 3 more years, CAGR was reduced further to 2.46 per cent. Annual data shown in Exhibit 1 and in Figure 1 bring out that consumption of petroleum products per capita experienced a fall during 2007-08 to 2009-19 and marginal increase in 2013-14.

When the same analysis is done for the previous 5 years (2008-09 to 2013-14), the high consumption states average share increased by 5.9 per cent in contrast to 3.1 per cent increase experienced by low consumption States.

States like Assam, Chhattisgarh, Jharkhand, Odisha and Uttar Pradesh exhibited high CAGR in per capita consumption (during 2013-14 to 2017-18) and also had positive Standard Deviation in their share in respective years (2017-18 and 2013-14). Amongst the high consuming States, Karnataka (an exception) displayed the similar trend.

One scheme of Government of India which has contributed immensely in making petroleum products consumption inclusive is Pradhan Mantri Ujjwala Yojana (PMUY), by which 58.3 million poor households in rural areas have been provided LPG connection at concessional rate during May 2016 to November 2018. PMUY was preceded by a scheme (DBTL-PAHAL) that enabled LPG subsidy to be credited to the target beneficiary’s account through the intermediation of banks.

Oil marketing in retail segment is done for marketing of Petrol, Diesel and LPG. Three Oil Marketing Companies (OMCs), namely, BPCL, IOCL and HPCL, undertake this operation with the help of 62,585 Retail Outlets and 20,146 LPG Distributors (as on 1 April 2018). Oil Industry for a long time has operated on strong IT architecture in the back-end for their internal business, operations and accounting. Today, lot of customer facing transactions are digitised and automated with a view to ensure right quantity and quality and better customer service.

Some of the initiatives encompassing digitalisation and improving customer experience are as follows:

The PSU OMCs shoulder the enormous responsibility of meeting the growing demand for of Oil and Gas in the country. These companies have managed the transition, digital and customer focused, without giving shock to the economy. The transition involved technology, capital and leadership acumen, which have been marshalled by political leadership, in synchronisation with social and environmental considerations.

Despite consistent growth trajectory in GDP, particularly since 1991, India remained shackled to energy poverty. Analogous to income inequality, India till 2014, was steeped in unequal consumption of energy sources. It was estimated in 2014 that 66 per cent households used conventional fuels like bio-waste and cow dung cakes as cooking agent. Against this backdrop, came the two most pioneering initiatives of NDA II. First one was Direct Benefit Transfer of LPG (DBTL), initiated in November 2014 followed by Prime Minister’s Ujjwala Yojana (PMUY), launched in May 2016.

D C Patra is Chief General Manager, Bharat Petroleum Corporation (BPCL).
The views expressed are personal and in no way represent that of the organisation.

Sixty five years into the struggle for economic development, policymakers in India in 2016, did realise that eradication of energy poverty is the single most important welfare measures that would facilitate economic well being of the people. Providing clean fuel for cooking was an enabling measure for economic empowerment of the households. Against this backdrop, Ministry of Petroleum and Natural Gas (MOPNG) with the objective of making clean cooking fuel available to rural poor households in the country, leading to improvement in the health of women and children, decided to launch PMUY—under which the OMCs would provide free LPG connections to women of BPL households, the cost of which will be borne parltly by the government and partly by the OMCs.

Central to the scheme was involvement of the democratic political process, participation of public representatives and civil administration at all levels. India since May 2014, witnessed a political order that promised to be inclusive, assertive and sensitive to the aspiration of its people.

LPG Field Officials were required to match the application details against Socio Economic Cast Census (SECC)–2011 database. The SECC, 2011 was conducted through a nationwide programme involving the Ministry of Rural Development, Ministry of Housing and Urban Poverty Alleviation, The Office of the Registrar General and Census Commissioner. LPG Field Officials entered details like name, address etc. into dedicated Oil Marketing Company Web Portal. Online de-duplication exercise was done within the Oil Marketing Companies to verify that the new applicant for LPG connection did not already possess an LPG connection at her home in her name, or anyone’s name in the same household. The eligible beneficiary was then awarded the LPG connection after completion of all the stages as stated above. This made PMUY a flagship scheme of social transformation, women empowerment and a drive towards mass use of sustainable energy.

Technology backbone, panning over all the three oil marketing companies, was a marvel that supported the operational, financial exchanges (compensation to OMC and reimbursement to LPG Distributor) of the initiative. The package provided integration at three different levels: at Distributor level, Company level and the Ministry level.

As on 1st December 2018 the Oil industry had released, 5.83 crore connections against a target of 8 crore to be done by March 2020. When the LPG connection count touched 2.5 crore, the connection was handed over by the then President of India Pranab Mukherjee to a poor lady Gouri Sarkar of Raghunathganj village in Murshidabad district of West Bengal. On 3rd August 2018, Lok Sabha Speaker Sumitra Mahajan handed over 5 croreth LPG connection under PMUY to Takrdiran of Delhi.

DBTL rode on a technology platform, first-of-its-kind in 2014, which linked Aadhaar and bank account with LPG consumer number. In the back-end, it was integration of four institutions (authorities) like UIDAI 346 banks (with few thousand branches), 3 Oil Companies (having 15,000 odd LPG Distributors) with NPCI. The technology base (both at front-end of operation at LPG distributorship) and back-end was so robust that every LPG cylinder delivery information and corresponding subsidy seamlessly passed from LPG distributor’s end to the beneficiary customer’s bank account. This has been a marvelous technology application for an item of mass consumption like LPG, which was implemented in a mission mode, involving all the Oil Companies, banks, state government officials at district level, under the overall guidance and coordination of the Ministry.
DBTL enabled every LPG customers to receive her subsidy amount directly to be deposited in their bank account. This was a revolutionary step in subsidy administration in India. True to the name of the scheme, Hastantarit Labh (PAHAL), DBTL plucked the proverbial leak in subsidy which used to find its way in every welfare measures, including LPG subsidy.

PAHAL was one of the largest ­public mobilisation programmes in a democratic set up in the world; involving as it did, 166 million households, few thousand branches of 346 banks and 15,000 LPG Distributors. By conservative estimate, PAHAL execution enabled at least R35,000 crore subsidy to flow seamlessly into 166 million accounts in a year. That earned a place for DBTL (PAHAL) in Guinness Book of World Record.

There were three key factors that led to the success of PAHAL:

DBTL-PAHAL covered all genuine customers into direct subsidy transfer mechanism, by linking LPG distribution system to banking system through Aadhaar. This process delinked LPG cylinder from the subsidy amount; thereby the price at which LPG cylinder was offered to customer was market price (non-subsidised). Subsidy amount got deposited in the customer’s account directly. This process eliminated diversion of subsidised LPG for non-domestic application. Thus, the misuse of subsidy was saved and led to overall savings of R26,408 crore till end of 2018.