“Implementation” can bridge the gap between programme design and project roll out. We need to harness the power of local, community-based solutions while integrating technical and financial expertise to deliver to expectations of people, says Hari Sankaran 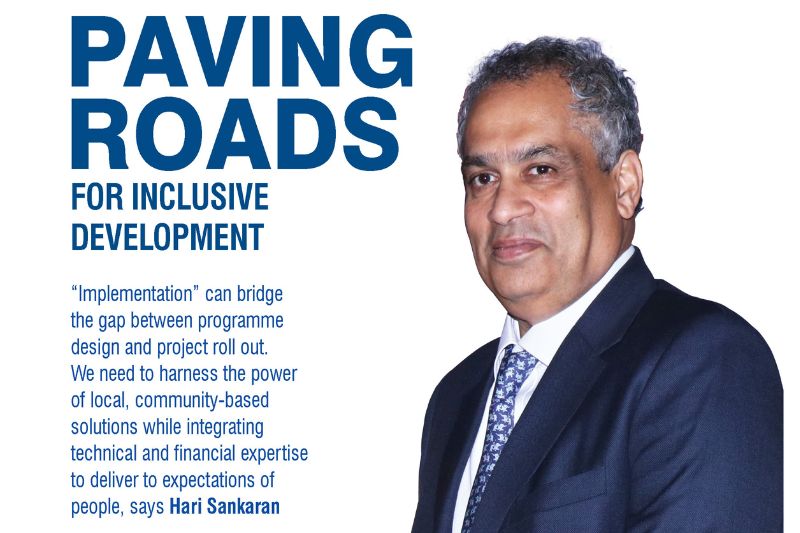 Private sector participation or Public Private Partnership (PPP), which was conceived more than a decade ago has made dramatic improvements in the way projects have got implemented. The most crucial aspect though, has been to figure out the ways by which it can be scaled nationwide touching all the critical sectors of infrastructure in an integrated manner, be it housing, roads, ports, highways, airports and so on.

On 2 April 2017, Prime Minister Narendra Modi inaugurated Asia’s longest and largest bi-directional road tunnel ‘Chenani-Nashari Tunnel’ built on Jammu Srinagar National Highway. This tunnel length of 9.2 km has reduced 30.11 km distance between Jammu and Srinagar, saving fuel cost of Rs 27 lakh per day. It is to be noted that world over, building tunnels is a tricky proposition. More so, when a tunnel is to be drilled through Himalayas, which is a younger mountain, still growing each year, making the terrain infirm posing technical challenges.

There are not many companies world over, which have the technical expertise to bore through such a challenging terrain to create an infrastructure marvel of such magnitude. We left no stone unturned in harnessing technology combined with our technical expertise to make it happen in a record time. Yet, we had our own set of challenges. For instance, half way to the construction, Australian contractor was bought over by a Spanish company, which in turn was bought over by a German conglomerate, which decided to exit India. IL&FS Transport—the implementation agency, part of the IL&FS group—was left high and dry to mobilise the resources and to bring in additional capacity to take over project management and successfully complete and dedicate the project to the nation.

Indeed, it has been the result of the hard work put in by engineers and the implementation team but more importantly, more than 2,000 workers including junior engineers, deployed on-site for execution of nation’s vision. More than 97 per cent of workers used by IL&FS ware picked up from local areas—many of whom had no prior experience of working on infrastructure projects—who were duly trained and immersed in the project.

We engaged with the community right from the beginning, which participated in design, construction and thereafter also employed in operational maintenance. The linkage between the community and the project is vital for scaling and externalising the benefits of investment. Throughout the implementation of this project, we enjoyed full support of the community as it became a project, which was seen by them as their own and offered all kinds of support. Now when the project has become operational, the trained work force has mostly been absorbed into the other projects that IL&FS has been executing in other parts of the country, meaning as many families were and are still being supported back home. The youth, whome we picked up for Chenani-Nashri project, was trained and put on the job, had little or no means of livelihood earlier.

Another noteworthy example is the execution of 1,052 km of state highways in Rajasthan in less than 22 months. The biggest problem that led to project delays in the past has been land acquition, which not only delayed projects but also escalated the costs. In this case, everything including land acquistion, designing, tendering, procurement, financial closure and construction—all completed in a record time. First stretch of 110 km was completed within 12 months and rest in much greater pace that not even China can match.

Both of the above examples threw its own challenges but meeting the global standards in project implementation were met with greater ease to create global benchmarks. The government built 47,350 km of rural roads under the flagship Pradhan Mantri Gram Sadak Yojana (PMGSY) in 2016-17, the most in seven years. That compares with the 36,449 km of roads constructed in 2015-16 under PMGSY and 36,337 km in 2014-15. The pace of rural road construction has ratcheted to 133 km a day over the three years to 2016-17, up from 69 km a day in 2013-14.

The interest shown by the Prime Minister for the possibility of replicating the Chanani-Nashri experience confirms his vision for paving roads for inclusive growth of India—growth equated with livelihoods. Subsequently in line with the commencement of this tunnel, 10 more highway projects have commenced in Andhra Pradesh to cover 405 kms and four projects in Gujarat covering 241 km. It is time for the capacity of infrastructure construction available in the country to be unlocked.