There is a long list of reforms and it cannot be done in isolation. We are trying to put together a sustainable ecosystem, which is accountable and transparent, says Rajiv Pratap Rudy 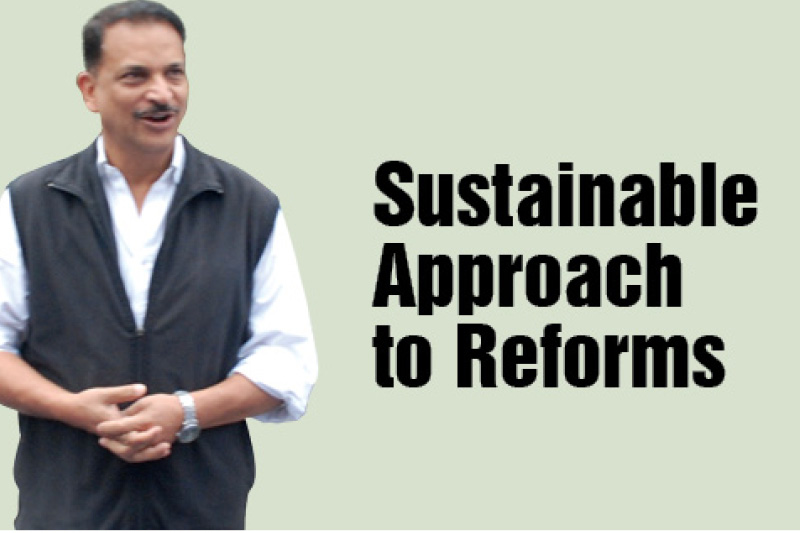 The Vajpayee government took the reform process forward in different directions, including trade, foreign investment, disinvestment, insurance, civil aviation, telecommunications, electricity, roads and education. These reforms laid the groundwork for the national economy’s growth rate climbing from 6 to 8 per cent and beyond in the 2000s.

Unlike certain other infrastructure sectors, aviation has progressed well over the last ten years with tangible results to show for it – new airports, a radical change in airport and air travel quality and nearly 20 per cent year-on-year passenger growth.

The airline sector in India has seen annual passenger air traffic grow from 7.5 mn domestic passengers in 1993 nearly 81 million at the end of 2015. Reforms have performed and are still performing. I would urge you to recall those days when you stepped into Delhi or Mumbai airport during the early 2000s. It was during the time when I was the Civil Aviation Minister that under the leadership of Atal Bihari Vajpayee that we took the decision to build world-class airports. Airports Authority of India (AAI) was used to concrete and cement structures; it was a challenge for it to shift to cement and steel and then steel and glass frame as was happening across the world.

I also recall a small instance of how we have waded through strange roadblocks. When Indira Gandhi International Airport was being constructed, I wanted to construct a toilet for the staff. There was a ramp and urinals were behind the ramp. It took me six months to get the toilet made. I had to walk up to the Prime Minister and said, if we cannot get a toilet through AAI in six months, then we should not think of building a world-class airport. That was the day, we decided to amend the AAI Act that paved the way for private players to come into the field of aviation infrastructure. The amendment allowed two brownfield projects of Delhi and Mumbai. The greenfield projects of Shamshamad and Devanahalli [location of new Hyderabad and Bengaluru International Airports] were the brainchild of the NDA government. The 36 non-metro airports were architected then. The charter airline policy was revised: then, the total number of charters was 50, now it touches 800. The government halved the excise duty on aviation turbine fuel to 8 per cent from 16 per cent through an executive order. This was when Jaswant Singh was the Finance Minister. As a result, the civil aviation sector got into an unprecedented growth phase. The growth phase continued for a while before dipping due to lack of reform measures introduced after the Vajpayee government. Both Delhi and Mumbai airports are the creation of that period and there has been no looking back ever since.

Another forgotten story is about opening up of Indian skies to private players. I remember, as MLA from Patna, when during the 1980s or 1990s, I would travel to Delhi, I used to pay Rs 8,000 for an Indian Airlines ticket. Today, one can fly in merely Rs 3,000 or so. How was this made possible? The concept of low-cost airlines was introduced in 2003 when Air Deccan took to the skies.

We are taking small steps, the impact of which will be visible very soon. Skill has always been a necessity but no Prime Minister thought of creating a Skills Ministry. It is pure common sense.

The government introduced a “limited” open skies policy in 2003-04. Earlier in 2003, India set the stage for the arrival of the low-cost carrier phenomenon. On 23 August 2003, the first low-cost carrier, Air Deccan, took to the skies with fares half of those of full-service carriers. The no-frills Air Deccan was an entirely different experience, made even more exciting when the airline later launched dirt cheap “one-rupee” fare to increase aircraft loads. Other low-cost carriers fueled competition in the field, with the emergence of SpiceJet in 2005 and IndiGo in the following year. The opening of the skies to foreign and private domestic airlines and the liberalisation of the entire aviation sector were the highlights of the 2003 Civil Aviation Policy introduced to enhance competition and make flying easier and cheaper. Airport privatisation too picked steam towards the fag end of the NDA government.

Another lesser-known fact is about one-third of Indian skies that are occupied by the Indian Air Force. The Prime Minister then convened a meeting with Defence Minister that resulted in IAF releasing half of skies for civil aviation. These were small steps but multiple of small steps made for big reforms in the sector.

Even now, we are taking small steps, the impact of which will be visible very soon. Skill has always been a necessity but no Prime Minister thought of creating a Skills Ministry. It is pure common sense. There were 70 odd schemes being run by 24 ministries in the Government of India. So, what was the need to create a separate Skills Ministry? If you look at the figures: US has 55 per cent of skilled workforce; UK, 68 per cent; Japan, 80 per cent; Korea, 96 per cent; and, India, just 3.5 per cent. It is really shocking! Out of 16 lakh engineering seats, 8.5 lakh seats are vacant; 17 per cent of engineering graduates are unemployed and nearly 80 per cent of engineering graduates are unemployable. We have strong leadership and we are committed to our people. We have to take the country and the aspirations of its people along.

In a sweeping foreign investment reform initiative in November 2015, the government has opened up several key sectors including defence, construction, civil aviation and media to foreign investment, eased norms for businesses 330 such as single-brand retail and private banking and allowed the Foreign Investment Promotion Board (FIPB) to clear proposals up to Rs 5,000 crore from Rs 3,000 crore earlier.

The crux of these reforms is to further ease, rationalise and simplify the process of foreign investments in the country and to put more and more FDI proposals on an automatic route instead of Government route where time and energy of the investors is wasted.

(Rajiv Pratap Rudy is Minister of State for Skill Development and Entrepreneurship (Independent Charge). The views and opinions expressed in this article are personal and do not reflect the views of INCLUSION.)