Renewable Energy: Where is the Complete Package?

India requires a comprehensive plan and strategy to create solar and wind capacities. The need for a major thrust in this area is well accepted but is there a complete package, asks B K Chaturvedi

By B K Chaturvedi 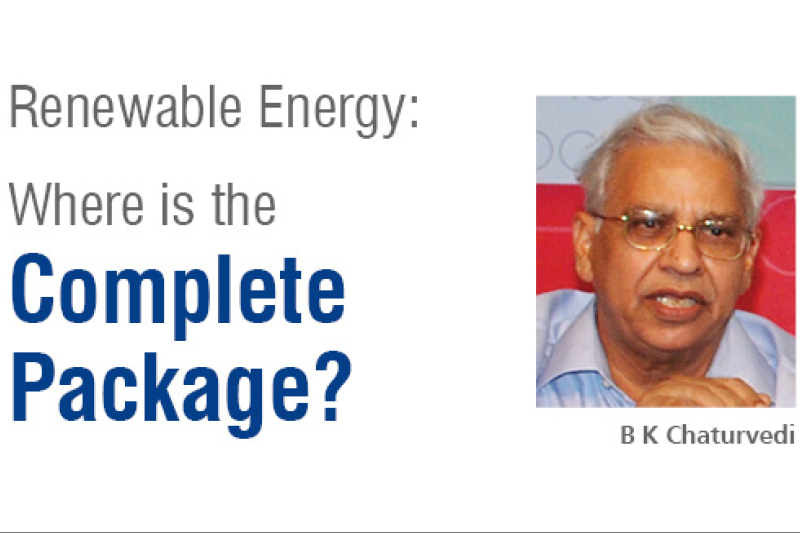 Sometime back Prime Minister Narendra Modi announced an ambitious target of 175 GW by 2022 for renewable energy. India has a low consumption of energy and will need to increase it several fold in the coming decades. With the global community working on reducing carbon footprint and the commitment of each nation being already in public domain with the international community as Intended Nationally Determined Contribution (INDC), the pressures for improving energy efficiency and increasing share of non-fossil fuel generation has become more intense.

There is a clear dilemma before the developing nations like India. Our per capita income is only $1600. Even in Purchasing Power Parity (PPP) terms this is one-tenth of the US or one-sixth of the most European nations. There are nearly 350 million people who don’t have access to electricity. Nearly 70 per cent of the population has no access to clean fuel like natural gas or LPG. They use either Kerosene or Biomass for cooking. The per capita energy consumption of the country is one-third of the global average. The level of urbanisation is only 31 per cent and in the next three decades, it may become about 60 per cent. Half of India is thus yet to be built. We are planning to grow at a sustained level of 7 per cent in the next two decades to increase per capita income to more than $6,000. This will put us in the group of countries with middle income levels. All this will require larger consumption of energy and will increase our emissions of greenhouse gases, which are already the third largest amongst all nations though much less than China and the US. While improving energy efficiency will reduce GHG emissions per dollar of GDP, a major increase in share of generation from non-fossil fuels will help sharply reduce the carbon footprint. This lends urgency to these targets.

The pace of expansion of renewable energy in the last decade has been very rapid. At the beginning of the Tenth Plan in 2002-03, the total capacity for renewable energy was 2,453 MW. In the last decade there has been a quantum jump in capacity addition. The total capacity at the end of September 2015 was 36,470 MW. The wind energy power generation capacity contributed to major share in this expansion. Its capacity increased to 23,763 MW from a mere 1,628 MW. Major expansion took place in two coastal states: Tamil Nadu and Gujarat. Two other significant changes in the sector were: first, bio gas generation and co-generation capacities were created to the extent of 4,418 MW up from 389 MW in March 2003 and second, solar generation, which was practically absent at that time, is catching up. A solar capacity of 4,061 MW was added during this period. Most of this addition has taken place in the last four years. Interest in solar power has increased with sharp reduction in cost of solar energy, which a couple of years back was R15-17 per Kwh and has declined to about R6 per Kwh. This has been possible due to technological changes and increase in scale of the operations in the solar sector. The cost of wind power has been comparatively low at about R4-6 per Kwh. However, it still does not compete with coal based power, which is about R3 per Kwh.

There is no specific plan or policy, which clearly indicates how these targets for solar capacities are to be achieved; capacity addition in the wind sector has been averaging. Such large capacities will require balancing power to take care of the large variation in generation during the day. This will be a difficult job and pose both technological and financial challenge.

The solar potential in the country is estimated as 750 GW and the wind potential as 100 GW. According to another estimate given by Lawrence Berkley Lab of US, the solar potential could be 2,000 GW and wind Potential 1,000 GW including about 350 GW of offshore winds. Between the two, the energy potential is estimated as 850 GW-2000 GW. The efforts to reach 175 GW with 36.5 GW already achieved, is not unduly out of reach, though clearly difficult as larger capacities will throw up new challenges. Let me briefly mention these:

First, there is no specific plan or policy, which clearly indicates how these targets for solar capacities are to be achieved. At this juncture it appears more of an ambition or an announcement. The price of coal-based power generation, as against solar or wind power, is lower. Coal prices are likely to be low for some time as oil and other energy prices remain depressed. In the near future, solar and wind power will continue to be costlier. The regulators and the power distribution companies will find it hard to schedule sale of costly solar or wind power unless the policy on merit order dispatch is revised. Germany has mandated highest priority to solar and wind power. We will need to look at our policy on this. Some states have indicated that they are setting up solar parks. Some large tracts of land from public sector are proposed to be used to set up new solar capacities. This will not be enough. We will need to add about 14,000 MW capacity per year. While the pace is bound to pick up, at this juncture there is no visible strategy to accelerate this.

Second, we need to add about 7,000 MW wind capacity on the average every year. Considering the past performance, this appears feasible though a quantum jump. But a detailed exercise is needed to identify the states, use of areas with poorer quality winds and upgradation of old wind power plants to new technology using 82 metre mast. Work will be needed on offshore wind potential. So far complete mapping has not been done. Lawrence Berkeley lab assesses about 350 GW of this potential. Some of it needs to be utilised to attain the target.

Third, such large capacities will require balancing power to take care of the large variation in generation during the day. This will be a difficult job and pose both technological and financial challenge. Nuclear power cannot be used for this. Gas based plants are facing severe gas shortage. LNG will need to be used, which may increase overall power costs. The hydro power capacity has very limited reservoir based capacity, which is useful for balancing power and most of these power plants are run-of-the-river. Even the new capacities planned are mostly run-of-the-river plants. Coal based thermal plants will hence need to be used. Ramping up capacities and providing balancing power from these will pose a technological challenge.

Fourth, the power generation from these plants will need evacuation of generated power. For this transmission infrastructure will need to be built. These are power plants in large number with small capacities. The power generation from these is generally about 20-30 per cent of the capacity. The transmission lines will remain underutilised and thus add to the transmission cost. There will also be a need to provide technical capacity to manage and schedule the power plants. An excellent start has been made with credit support from Germany to build Green Power Corridor. But this will need expansion as new capacities come up. It is only proper that these are built and managed by state undertakings. Clearly, stakeholders will have a say in such management.

There is no plan or any comprehensive policy, which answers many questions which arise in this context and as new solar and wind capacities are planned. Is there a package? Developers are not aware of it. Then, how will we move and encourage people to invest?