Removal of basic rural poverty in the country is no longer a rhetoric or a slogan. It is certainly doable. L C Goyal tells, how 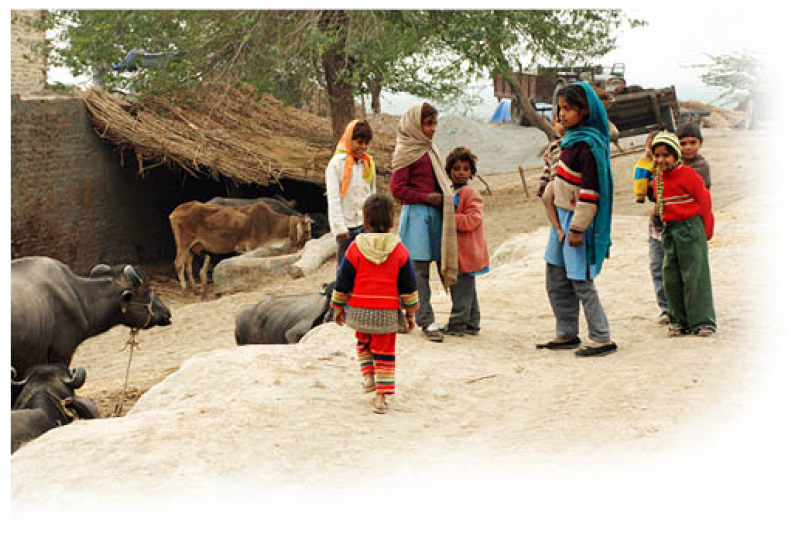 I personally believe that the living conditions of the rural poor receive very little attention. Problems of poor people in rural areas need to be given more space in public discourse. MGNREGA has enabled both livelihood security and social development. Issues of delay in payment of wages and lack of adequate technical staff remain. Increased focus is also necessary on creation of durable and quality assets through sustained convergence with other government programmes and schemes. Social audit has to be on a bigger scale to induce greater accountability, efficiency and transparency in implementation of the programme.

In the last few years, poverty levels in rural areas have come down to 25.7 per cent in 2011-12 at a relatively faster rate than before. Also, the rural landscape has witnessed a rapid transformation. Rural wages have increased at about 20 per cent every year in recent years. While agriculture remains at the heart of rural livelihoods, there is a growing shift to non-farm employment. As per latest NSSO data, the work force engaged in agriculture has declined below 50 per cent for the first time. As more men move towards non-farm jobs outside the village, there has been a feminisation of agriculture.

There has been a high GDP growth rate over the past decade at 7.3 per cent, on average, per annum between 2001 and 2010. We should also be equally aware of the fact that there are still a huge number of people in rural areas who are below poverty line, given the gigantic size of population of our country. In a low income country like ours where income inequalities are rising, and there are wide variations in socio-economic indicators across and within States, high economic growth and distribution or social development need to go hand in hand. This is a two way relationship as is rightly articulated by Jean Dreze and Amartya Sen in their Book An Uncertain Glory – India and its Contradictions. In our context, therefore, this is an imperative and not an option if the goal of ‘inclusive growth and removal of rural poverty’ is to be realised.

Keeping this backdrop in view, the vision of the Ministry of Rural Development is sustainable and inclusive growth of rural India aimed at eradicating rural poverty.

The estimate is that there are 80 to 100 million rural poor and vulnerable households spread over 250,000 Gram Panchayats in more than 630 districts of the country. Of these, the bottom 25 per cent of the households need special attention. To realise the vision of inclusive growth, the Ministry is credited with mainly four flagships programmes that comprise a multi-pronged anti-poverty architecture and strategy of;

Rural connectivity is a critical component in socio-economic development of rural people as it provides better access to amenities like education, health besides strengthening of rural livelihood base. The contribution of rural connectivity to poverty reduction has been very significant. This scheme has been very successful. Over the last 13 years, nearly half of the eligible unconnected habitations totalling 94,767, have been connected with a total length of 382,000 Km. Rural connectivity alongside electrification and tele-density have proved to be big productivity enablers in rural areas.

Provision of shelter contributes very significantly to the family’s dignity, self-esteem, security and socio-economic development. IAY is a public housing scheme for rural BPL families. Since inception, 32 million families have benefited under this intervention. In the 12th Plan, the target has been scaled up to 3 million houses per year.

MGNREGA provides guaranteed unskilled wage employment to willing rural households through creation of durable community and individual assets that provide sustainable incomes. It is a unique programme both in terms of its scale and delivery mechanisms. Every year, on an average, 2.3 billion person-days are generated, 50 million rural households and 90 million adults are given guaranteed employment with about half of them being women and another half coming from Scheduled Caste and Scheduled Tribe categories thereby constituting a massive exercise at social inclusion. Close to 400 billion rupees are being spent on the programme every year, almost entirely by the Central Government.

Various studies have shown that MGNREGA has provided a resilient safety net especially in lean periods, it has reduced distress migration to other rural/urban areas, enhanced the value and opportunity cost of rural labour, strengthened or regenerated the natural resource base such as land, soil, underground and surface water sources, irrigation, forests, environment in rural areas and has led to significant socio-economic empowerment of women and strengthening of local level democratic institutions (PRIs).

The programme has also led to unprecedented financial inclusion. Nearly 90 million bank or post office accounts have been opened in the name of beneficiaries thereby bringing them into the organised sector.

NRLM is a unique programme aimed at removal of rural poverty through universal social mobilisation of rural poor households into self-managed and sustainable institutional platforms of the poor. Its core belief is that the poor have innate capabilities and a strong desire to come out of poverty. Ground level experience has shown that these latent capabilities in each poor person can be unleashed when the poor (they) are organised, supported, nurtured and capacitated through knowledge, skills and information and provided continuous access to resources. The best institutions to do this are the institutions of the poor women themselves. NRLM has a model based on more than two decade long experience of state-wide coverage in certain States such as Andhra Pradesh, Kerala and Tamil Nadu and the work of dedicated civil society organisations (CSOs) across the country. The basic strategy of NRLM is that all the key processes are driven by the institutions of rural poor women, especially by women who have come out of poverty and whose lives have been transformed by this very process.

These women leaders known as Community Resource Persons (CRPs), enable scaling to happen in a very organic manner without losing quality. They also make the process sustainable and self-managing. I have had a few interactions with some of these women. There are about 1,500 CRPs majorly from Andhra Pradesh and also from Bihar currently working in seven different States (and four other States are in the pipeline) including in difficult areas like Jammu & Kashmir and Naxal affected States such as Chhatisgarh and Jharkhand. After listening to their experiences, I told them that ‘the work that I have been doing in the last 34 years of my service is nowhere near the excellent work you are doing. You are the real community leaders or change agents.

NRLM has proved to be a cost-effective programme. The financial support from the government is only to the extent of Rs 150 million per block in a span of 10 years. Effectively, it works out to just Rs 12,000 per rural household over this period. Even out of this investment, almost Rs 8,000 in the form of seed capital remains with the self-help groups and their federations as ‘a resource in perpetuity’. This investment is expected to leverage at least 8 to 10 times the amount in terms of institutional credit and is targeted to help them through each household based micro-investment plans to graduate from their current unviable and risky livelihoods to more viable and sustainable livelihoods and thus come out of poverty. This would mean creating and strengthening of 7 to 8 million Self Help Groups (SHGs), essentially of poor women across the country. NRLM, in my view, it is most central and potentially the most significant, in our fight against rural poverty.

We have categorised States into different levels depending on the capacities that exist and the social capital already available in each state. It will be implemented in a phased manner but eventually all States are expected to come on board by 2020-21. Today, 1.6 million Self Help Groups in 1,229 blocks are within NRLM fold. I have personally interacted with some of these SHGs in Andhra Pradesh and Jharkhand and am convinced that the philosophy and strategy of NRLM compliant SHGs holds a great promise for faster, more inclusive growth and removal of abject rural poverty.

These strong grassroots institutions of poor women indeed go beyond livelihoods. Investments in social and economic mobilisation of the rural poor lead to increased voice, participation and representation of the rural poor in local governments and create a demand side accountability and pressure for better access to various legal entitlements from Government right up to the last mile service delivery and consequent effective implementation of the programmes and good governance at the local level. This programme needs to be supported by any Government that comes to office in May this year.

Sustained high economic growth coupled with equity or social development is a necessary condition for permanent elimination of rural poverty. India’s rural income is expected to grow to US$ 1.8 trillion by 2020 from the present level of US$ 572 billion. It is eminently possible that the next phase of high economic growth GDP in the country will be sustainable only on the strength of continued growth in rural areas. The other areas of health, nutrition and education, which have a direct impact on poverty reduction, will need to be given greater focus and resources. For example, if the initiative approved with an outlay of Rs 300 billion during the 12th Plan by the Government in 2011-12 on the recommendation of the sub-working group of the 12th plan chaired by me as Additional Secretary in the Ministry of Health and Family Welfare for free supply of essential medicines is implemented without delay and free medicines are made available to all those who access healthcare in any public health facility across the country, individual out of pocket (oop) expenditure on healthcare will come down sharply and will thereby help people come out of poverty or prevent people from falling into poverty.

Rural youth is no behind in view of growing use of ICT and social media. Aspirations of the skilled youth cannot remain unmet or unattended for a long time. More skilled jobs are needed in the formal or manufacturing sector, particularly through small and medium enterprises. To facilitate this, reform in labour laws and processes of doing business has to be a top priority, irrespective of the Government that assumes office in May this year.

Skill development requires to be taken up by the Central Government, State Governments and the private sector in a holistic manner on a much larger scale. Huge skill gaps in professions ranging from masons, plumbers, electricians, security guards to nurses and teachers persist. India’s educationally skilled workforce is limited to only about 10 per cent, trained formally (2 per cent) and informally (8 per cent). Training capacity remains grossly inadequate in as much as all technical training institutes taken together can only train about 3 million people per year, whereas over 12 million people enter the workforce every year.

Inclusive growth and removal of rural poverty are the two sides of the same coin. Elimination of poverty is achievable. We can ill afford to allow NRLM to become a precursor to any other similar government programme 4 to 5 years down the line. NRLM has to be inevitably the last and final weapon in our battle against rural poverty. The support structures will need to be professional and the staff quite sensitive to be fully mindful of this imperative. Actions that are taken today will determine the future. What we need is to bring the problems of poor people in rural areas and the goal of inclusive growth and poverty removal at the very core of the development and governance agenda of the country.