Finance is a legitimate business, and one does not have to be a bank to do it. As a microfinance lender, Bandhan Financial Services has proved it over a decade since its inception in 2001. Now it has joined the race for banking. If it is awarded the licence, Bandhan, which is currently into small lending business, will be converted into a bank. A report by TEAM INCLUSION 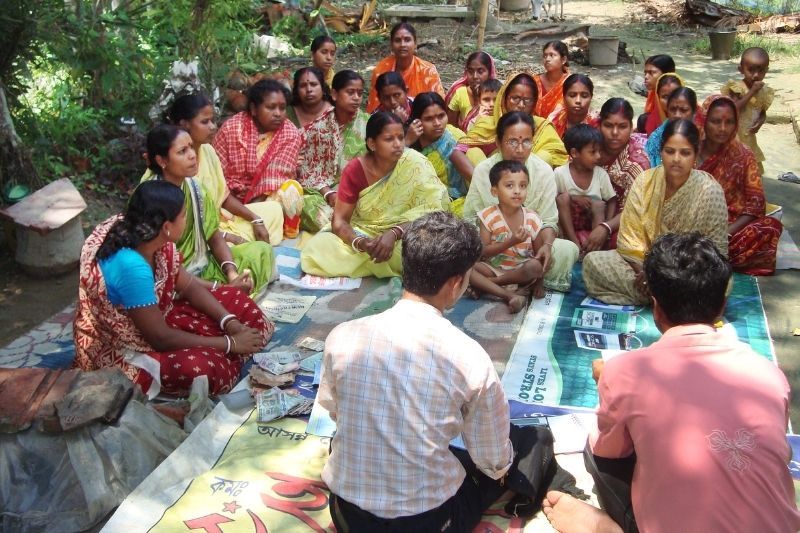 According to the guidelines issued by the Reserve Bank of India (RBI), companies getting banking licence will be required to create a non-operative financial holding company (NOFHC) within 18-months of in-principle approval and bring all its entities offering financial services under its umbrella. Another major challenge for the aspirants is that the new bank should have at least 25 per cent of its branches in unbanked rural areas in order to achieve the government’s objective of financial inclusion.

“Achieving both these targets will not be difficult for us as 75 per cent of our 1,804-odd branches are already operating in rural areas. As a future roadmap, we plan to convert 700 of our outlets into bank branches, while the remaining 1,104 will be ultra-small branches working under the main branches,” says Chandra Shekhar Ghosh, Chairman & Managing Director, Bandhan Financial Services.

Also against the regulatory requirement of having a net worth of Rs 5 billion for eligible entities, Bandhan’s current net worth is 9 billion, which is expected to go up to Rs 15 billion in next two years, assuming that it will take another two years to operationalise the banking services.

Bandhan is one of the few large microfinance institutions (MFIs) with over Rs 1 billion lending, that would be able to meet the regulatory directive of the RBI of maximum 10 per cent margin (the difference between lending and borrowing rates) Its low operational expenses come from the staff, as most of them are Bandhan’s borrowers. Around 80 per cent of its total lending (currently Rs 44 billion to 4.5 million borrowers) is rural.

One of the thrust areas of Bandhan is to work with women who are socially disadvantaged and economically exploited. Bandhan works for their social upliftment and economic emancipation. “Our commitment towards triple bottom-line values is strongly asserted by its intervention in development activities. We believe that microfinance is not the last word for development of the poor,” avers Ghosh.

Aspiring holistic development of the poor, Bandhan offers development activities in crucial fields of education, health, unemployment, capacity-building and livelihood. Besides, it also has a programme exclusively for the extremely poor (generally believed to be surpassed by MFIs). Primarily, Bandhan was set up to address the dual objective of poverty alleviation and women empowerment. Even now, it is following the same mandate as an established financial institution.

Recently, an IIM-Ahmedabad’s impact evaluation study on this microfinance major observed that the average annual net income of West Bengal households under Bandhan’s business witnessed an increase of Rs 13,231 or 13.81 per cent.

The study was done with an objective to assess the impact of microcredit and other development interventions being made in the lives of the underprivileged through a sample of 1,050 households across five clusters in West Bengal. Bandhan caters to more than 4 million poor women through its network of 1,804 branches spread across 18 states of the country with credit offered over Rs 44 billion. Bandhan is basically focused on the Eastern and North-Eastern parts of the country.

The decisive existential changes came in 2009 when its microfinance business was transferred to Bandhan Financial Services that was registered as a non-banking financial company that comes under the supervision of the RBI. This was done since banks were reluctant to keep lending to it, thus making scaling up difficult.

With a humble beginning in West Bengal, Bandhan has now its footprints across the East and North-East, up to Uttar Pradesh and Maharashtra in the West. It has not ventured into the South on such high scale and thus saved itself from the setback suffered by other MFIs in Andhra Pradesh a couple of years ago. Unlike other MFIs, Bandhan saved itself from the ironies of multiple lending that caused the Andhra Pradesh crisis.

Chasing an untravelled path, Bandhan initially spread in those areas lacking any formal financial mechanism to give loans. Things have radically changed over the years as these terrains too are now witnessing competition among financial institutions.

However, Bandhan has been adhering to the regulatory guidelines but new emerging regulations are also posing tough challenges to it. For instance, the bill to regulate microfinance in its present form is unclear whether MFIs can access the savings of the poor that societies, trusts and companies constituted as non-profits under section 25 of the Companies Act can.

Primarily, Bandhan was set up to address the dual objective of poverty alleviation and women empowerment. Even now, it is following the same mandate as an established financial institution

In succeeding to get a banking licence the way Grameen Bank has in Bangladesh will make Bandhan truly empowered among the MFIs. This will restrain the wrongdoings of chit funds, which have assumed alarming proportions in the East and will also bury the myth that MFIs can’t access and distribute capital on rational rates like banks.

Ghosh sees it as an opportunity to end the artificial scarcity of fair banking services to the poor of the East. Over the years, the poor of these regions were the target of both informal and formal moneylenders. Thus, they were naturally precarious to enter into a vicious circle and continuing with it. The existing ground realities show that the root cause of the banking gap is in fact not the low return of investment (ROI) of banking operation in difficult terrains (as quite often sighted as an excuse). Rather, the gap is caused by the low understanding of grassroots socio-economic conditions and community behaviour.

Bandhan is different from its peers in prioritising the areas of businesses and in modes of operation. Despite having a sound capital base and good inflow of revenue, it was never tempted to shift from its core business proposition, which is rooted in financing through social involvement. With a sound pedigree of empowering the marginalised and harnessing entrepreneurial zeal among them, Bandhan has brought changes in a number of lives. As an MFI, it has worked with ethics and never landed in a situation that adversely impacts its business. Bandhan has its fundamental strengths lying right on place.

There is a development and softer but lesser known side of Bandhan. Healthcare continues to remain outside the domain of the poor with serious repercussions felt in the economic and social spheres. Poor are deprived of the knowledge of primary healthcare and existence of government health centres.

Bandhan Health Programme was commenced in 2007 in some of the economically and socially deprived areas of rural West Bengal targeting children, adolescent girls and women. Bandhan’s 1,650 Swastha Sohayika (Health Volunteers) have so far conducted 803 health forums covering 412,500 beneficiaries. In another development programme – water sanitation – Bandhan has joined hands with Water.org, a US based not-for-profit organisation with expertise in water and sanitation. Together they formed a programme called Wat-San to sensitise communities; generate awareness and demand; and facilitate linkages for affordable sanitation, and water related products and services. Till date 1,083 water and sanitation loans have been disbursed utilising which 238 latrines have been set up and are being used; 760 are under construction and 85 will start soon.

“This time, the aim of bank licences is to achieve maximum financial inclusion through an increased emphasis on grassroots banking. For that, the existing institutions like Bandhan, with proven track record in rural areas, should be prioritised,” echoes Ghosh. The corporate entities in the race are better suitable, if at all, for banking in urban locales as their existing business experience or expertise substantiate it.

In the last two decades, the existing private banks have failed to reach beyond Tier-III cities and that explicitly shows that rural banking is not a genuine part of their scheme or business. Banking in India cannot be efficiently channelised through overlooking its sheer diversity and needs of different socio-economic strata.

Unfortunately, so far things have shaped up the opposite way (barring creation of Regional Rural Banks). Erosion of natural impulses for mass banking grew up much evidently in the wake of liberalisation drive in 1991. Queuing in the same league, like counterparts in private banking, public sector banks too followed the policy of giving weightage to urban spaces over rural set-ups. Resultantly, with lower proportion of bank branches, the potential for financial inclusion compressed too tightly in rural areas.

This round of bank licensing is aimed to curb those prolonging deficiencies, came through wrong policy thinking that the rural banking is unsustainable from the commercial standpoint. This time, the central bank is characteristically leaning to make a strong ground for inclusive banking.

Another consideration that the RBI has to make is that the microfinance business can be better run through the competitive banking channel rather than through the existing model in which MFIs are struggling. Bandhan as a bank with its social vision and affordable lending rates will be able to cater to the needs of the poor in a bigger way and with much larger foothold all across India.

A man with a mission, Chandra Shekhar Ghosh is committed to serve the maximum number of unbanked citizens. The last two rounds of bank licensing, despite having brought some positive changes on technology front, have hardly resulted in positive outcomes for those living on the socio-economic edge.

With a conservative regulatory regime, getting into banking is a tough exercise in India. However, Bandhan has proved as an MFI that honest intention succeeds in social enterprise and business venture too. Ghosh is optimistic about his company’s chances as a future bank. Even of late, it is time for course correction by the RBI through giving serious consideration to an applicant’s capacity to serve the poor better.