Breaking the cycle of disadvantage is for those individuals and communities who have spent too long waiting for opportunities to make a contribution and participate in a meaningful way. It is about reaching out to people on the margins and drawing them into full engagement in the economic and social life of our country, says Ruth Manorama 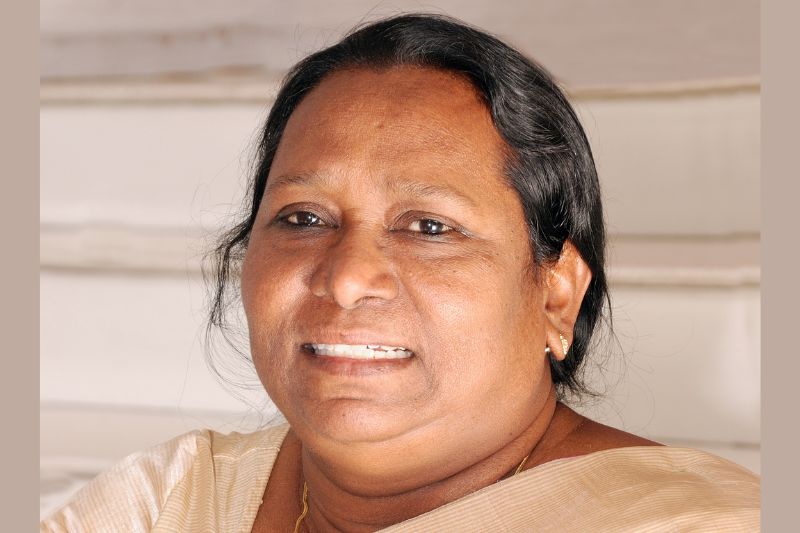 Ruth Manorama, organiser of and advocate for dalit women

Social exclusion is a deeply complex phenomenon, which cannot simply be addressed by isolated activities, which reduce poverty or homelessness nor is it just about increasing employment and education opportunities. Social relations itself are of instrumental importance, because being excluded is in itself deprivation. Breaking the cycle of disadvantage is about enjoying human rights, human dignity and respect. It is building the capacities of the most vulnerable and marginalised communities to connect and reconnect to their communities and other social groups to develop purposeful social relationships, towards establishing “transformatory societies”.

It is time to remind ourselves that the theorising of caste has its intellectual history, not in the “scientific” work of anthropologists of European origin and their “native” heirs, but in the political work of Indian ideologues – Jothiba Phule, Savitribai Phule, Pandita Ramabai, Periyar and B R Ambedkar – who were committed to the establishment of an egalitarian social order, and who in that endeavour saw caste as the single most powerful obstacles to the realisation of that commitment.Phule’s accounts of caste in the 19th century are grim. Ambedkar’s concerns in the 20th century centred on finding ways in which independence could bring freedom to the oppressed, with affirmative action and positive discrimination being a first step.

“My final words of advice to you are educate, agitate and organize; have faith in yourself. With justice on our side I do not see how we can lose our battle. The battle to me is a matter of joy. The battle is in the fullest sense spiritual. There is nothing material or social in it. For ours is a battle not for wealth or for power. It is battle for freedom. It is the battle of reclamation of human personality!”

“Atrocities committed on the most under-privileged segments of our society, i.e. SCs and STs… is a scourge which demands the formulation and articulation of our nation’s collective will and a determined effort to fight it and root it out of our society without any loss of further time.”

The caste system, or untouchability, is at the root of the discrimination of social exclusion. Schedule castes (SCs), or dalits, constitute 16.23 per cent the total population of India. Dalit women constitute 49.96 per cent of the total dalit population. Dalit women in India suffer from three oppressions: gender, as a result of patriarchy; class, being from the poorest and most marginalised communities; and caste, coming from the lowest caste, the ‘untouchables’. Although discrimination on the basis of caste is against the Indian constitution and prohibited by many laws, its practice is still widespread, especially in rural India.

Recognising the relative backwardness of the SCs, the Constitution of India cast a special responsibility on the State to promote with special care the education and economic interest of SCs and promises to protect them from all forms of exploitation and social injustice. There are adequate constitutional and legal provisions, executive policies and welfare and developmental programmes in place to prevent and eliminate caste-based discrimination and violence. However, ineffective implementation has rendered these provisions notional.

SCs have difficulties in exercising their right to vote, to contest elections and to hold elected offices at the local level. During the 2009 general elections, the National Dalit Election Watch reported several incidents of violence, of which 32 per cent were threats/intimidation/violence by dominant caste groups

Despite Article 17 of the Constitution of India abolishing untouchability and the promulgation of various legislations and policy measures, the rights of SCs are infringed upon round the clock, throughout the year. Studies attesting to nearly 148 forms of untouchability, some the most heinous, inhuman and terrorising forms of atrocities, continue in violation of civil, political, economic and cultural rights of SCs. Discrimination and atrocities related to land, labour, water, wages and other livelihood aspects are on the rise in private and public spheres, state institutions, religious institutions, and labour and consumer markets.

Government records and reports, independent and credible research institutes present an alarming picture of caste-based discrimination and violence. An increasing trend in the denial of basic livelihood rights, growing numbers of atrocities, high dropout rate of students, unabated land and labour rights violations, disregard of public health, denial of access to any place or service, obstruction to political participation, negligence of law enforcement authorities in filing complaints, undue delays in police investigation and trial of cases, and abysmally low conviction rate illustrate this. In such instances of discrimination and violence, one notices certain striking features: (i) continuing patterns of discrimination and violence, (ii) increase in frequency of occurrences, (iii) newer and multiple forms of discrimination and atrocities, (iv) use of systematically designed and well- executed methods of subjugation and exclusion, and (v) violence against dalit women.

Of particular concern is the rise in violent acts of atrocity. Nearly 200 million SCs continue to be discriminated against and crimes ranging from abuse on caste name, murder, rape, arson, social and economic boycott, parading naked SC women, forcing them to drink urine and eat human excreta, etc, are committed against them. Between 2008 and 2010, a total of 116,813 atrocities were committed against them, with an increase of 10.6 per cent in 2009. According to the Crime Statistics of India, every 18 minutes a crime is committed against SCs; every day 27 atrocities are committed against them (3 rapes, 11 assaults and 13 murders); every week 5 SC homes or possessions are burnt and 6 SCs are kidnapped or abducted. Committee on the Elimination of Racial Elimination (CERD) noted its concern about the alarming number of acts of sexual violence against dalit women, primarily by dominant caste men. The National Crime Records Bureau (NCRB) reported a total of 1349 rape cases of dalit women for 2010, with the state of Madhya Pradesh reporting 316 cases, followed by Uttar Pradesh with 311 cases. There are cases of kidnapping and abduction of women, with Uttar Pradesh alone accounting nearly 48.5 per cent of the 511 cases for 2010. Notably, there is no disaggregated data on atrocities against dalit women. Young dalit girls suffer systematic sexual abuse in temples, serving as prostitutes for men from dominant castes. Thousands of dalit girls are forced into prostitution every year through the practice of offering women as devadasis and joginis.

Dalits face atrocities committed by the police who are supposed to protect them. The Human Rights Watch identified various patterns of atrocities by police officials and more than 60 per cent of torture victims belonged to SCs and religious minorities.

SCs have difficulties in exercising their right to vote, to contest elections and to hold elected offices at the local level. During the 2009 general elections, the National Dalit Election Watch reported several incidents of violence, of which 32 per cent were threats/intimidation/violence by dominant caste groups, 22 per cent SCs were not allowed to vote by members of various political parties and due to clashes between political parties, and 20 per cent SCs were deliberately excluded from voters’ lists. International Covenant on Civil and Political Rights (ICCPR) recognises the right to peaceful assembly, on 11 September 2011 when dalits in several thousands gathered to commemorate the assassination of a well-known dalit leader, Immanuel Sekaran, at Paramakudi town in Tamil Nadu, the police resorted to brutal attacks with sticks and firearms without any prior warning. Six dalits were shot dead and many more injured.

The cost of working for the rights of marginalised people has been risks to life, name and livelihood, and social ostracism. On the other hand, those collectivities striving for their rights have been victimised. There is no corresponding domestic legislation in India to safeguard the rights of the SC human rights defenders

Dalit Christians, forming around 75-80 per cent of the Indian Christian population, and churches are often targeted with physical attacks and violence in recent years. The rhetoric of religious conversion “engineered” by religious fundamentalist forces has been pivotal in fomenting violence against SC Christians, as was evidenced in Kandhamal district of Orissa in 2008. According to government figures, more than 600 villages were ransacked, 5,600 houses looted and burnt, 54,000 people left homeless and 38 people murdered. But human rights groups estimate over 100 people killed, including disabled and elderly persons, children and women. More than the brutal physical injuries, it was the mental trauma that affected a larger number of people. Reports also speak of 295 churches destroyed and 13 schools/colleges/offices of several non-profit organisations damaged.

There have also been several cases of insults by using caste based abusive language to dalit human rights defenders places. Assaults in public places, torture, illegal detention, harassment and misbehaviour, forced disappearances, extra-judicial killings, illegal imprisonment, surveillance and targeting of family members, branding as naxalites and anti-nationals and implications in false cases have not been uncommon rights’ violations against SC human rights defenders. The cost of working for the rights of marginalised people has been risks to life, name and livelihood, and social ostracism. On the other hand, those collectivities striving for their rights have been victimized. There is no corresponding domestic legislation in India to safeguard the rights of the SC human rights defenders.

Every day 1.3 million people in India (of which more than 80 per cent are dalit women) are forced to clean human excrement with their bare hands (a practice called manual scavenging) for little to no wages. Of the 770,338 manual scavengers and their dependents across India, so far only 427,870 persons have been assisted under the National Scheme of Liberation and Rehabilitation of Scavengers (NSLRS) and the remaining are yet to be rehabilitated. As per the Public Interest Litigation filed in the high court of Delhi, Indian Railways, which employs a large number manual scavengers, is one of the biggest violators of the Employment of Manual Scavengers and Construction of Dry Latrines (Prohibition) Act of 1993. Despite recommendations from the ILO Expert Committee on Conventions regarding Convention no. 111 in 2002, which looked into questions related to manual scavenging, this pernicious practice still continues.

The implementation of protective legislation to protect the life, honour and dignity of dalits needs stringent implementation. Some ways in which this can be done, are: