In a poor and developing country like India social banking is a necessity because a vast bulk of the population has not yet realized as to what are the banking facilities and how they can make best use of the facilities if they are given credit as per their requirements, says Prabhakar Kulkarni 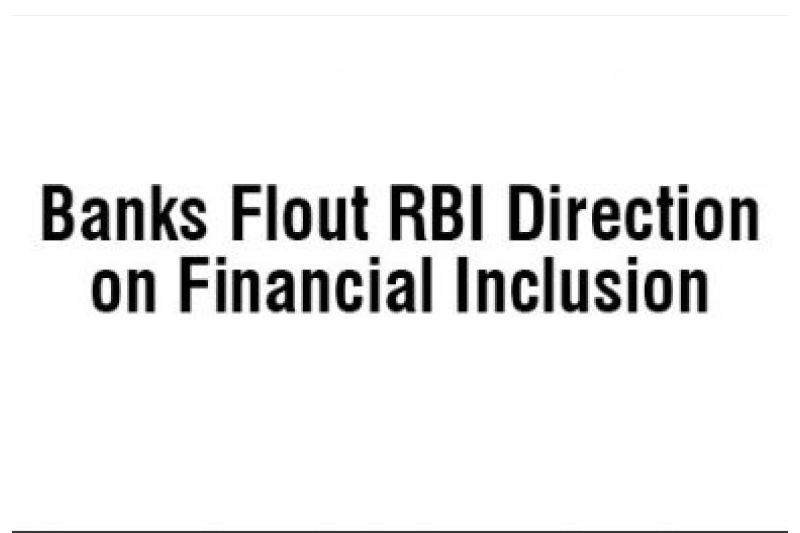 After 63 years of Independence and 41 years of bank nationalisation, financial inclusion is being considered a priority, which needs to be carried out with urgency and dedicated expediency.

What exactly is financial inclusion? The term ‘financial inclusion’ should be understood in broader perspective to mean the provision of the full range of affordable financial services namely access to payments and remittance facilities, saving, loans and insurance services by the financial system to those who are or tend to be excluded from these services.

To kick-start the process of financial inclusion, the Reserve Bank of India (RBI) advised all banks in November 2005 to make available a basic banking with ‘no frill’ accounts either with nil or very low minimum balances as well as charges that would make such accounts accessible to constituents in rural and semi-urban areas of the country. It also directed the banks to issue a General Credit Card (GCC) to provide hassle-free instant credit to such constituents.

The card was expected to have a credit limit of Rs 25,000 based on the assessment of income and cash flows of the household without insistence on security, purpose or end-use of the credit. The credit facility was to be in the nature of revolving credit entitling the holder to withdraw up to the limit sanctioned and the banks could charge appropriate and reasonable interest on the facility. The banks were also advised to make available all printed material used by retail customers in the respective language.

Although the system was introduced five years ago, what exactly the banks have done during the period has not yet been assessed. A random survey and liaison with some bankers, mostly working in bank branches in rural and semi-urban areas has revealed that much is still to be done as per the expectation. In most branches ‘no-frill’ accounts are opened but no credit facility up to Rs 25,000 or any amount below that is given.

The ‘no frill’ scheme seems to be based on the concept of social banking which prima facie is not profitable from banks’ profit point of view. In a poor and developing country like India social banking is a necessity because a vast bulk of the population has not yet realized as to what are the banking facilities and how they can make best use of the facilities if they are given credit as per their requirements.

As pointed out by both the Union government and the RBI, 50 percent population of this country is not getting any banking facility. This means around 600 mn people are yet to be covered by the banking system and that too when they are struggling hard for their daily living. As they are not yet introduced to the banking system they are depending on private money lenders who are widespread in rural and semi-urban areas so much so that there is a private monetary system and most of the poor and the needy are under the clutches of this system.

As the financial inclusion basically means inclusion of the other half of the population in the banking system bankers were expected to implement the scheme with consumer-friendly dedication. But the RBI’s policy seems to be relying on communicative rather than enforcing approach particularly regarding the schemes which are in the interests of common consumers or neglected sections of the society. It is realised when inquired about the implementation of the instant credit system, the RBI informed this writer that it has written to Indian Banks’ Association (IBA) to direct all banks or its members to follow the RBI’s guidelines in this regard. Is there any reason why the IBA should be contacted when the RBI is the main governing body? The question can be raised as to who rules banks, RBI or IBA?

The RBI’s directive to open branches in all villages with population over 2000 is also not sincerely responded to by the nationalised banks. Instead of opening branches they have diverted the directive to a scheme to appoint business correspondents. Is it possible for such business correspondents to assess rural consumers’ credit requirement and work as per consumers’ expectations? There is no reason why the RBI should take a lenient view and allow banks to follow the specific directives which are in national interest. This is more so because banks are one of the prominent centres which contribute to socio-economic development of our country. If neglected sectors are given due credit and special facilities they will come up to the required level of economic development and will help reduce gap between poor and the rich.