It is often said that in India the average people’s love for the country is at its peak primarily on two instances; one, when there is likelihood of a war, threat to internal security or an attack on its armed forces; 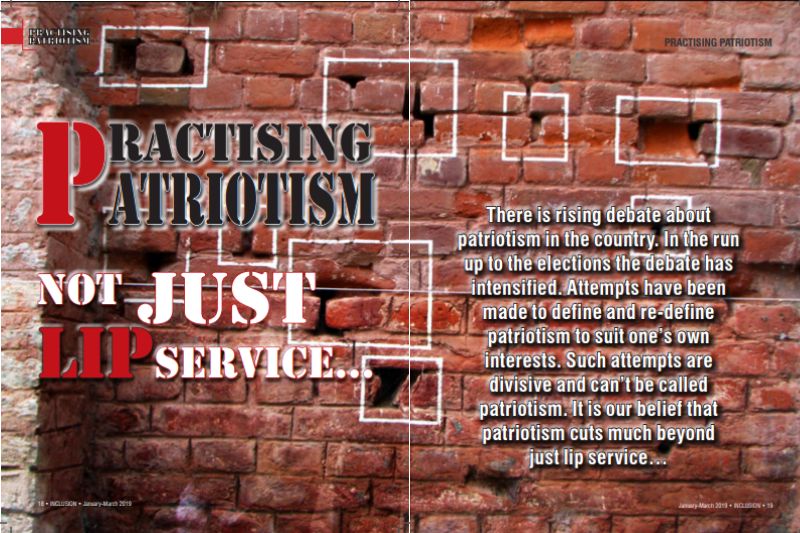 It is often said that in India the average people’s love for the country is at its peak primarily on two instances; one, when there is likelihood of a war, threat to internal security or an attack on its armed forces; and, second, when there is a cricket match between India and Pakistan.

Feeling angry at the time of war or terrorist attack is natural and indeed a patriotic feeling. Cheering for our cricket team is equally great. But do our duties and responsibilities end there? Patriotism calls for sacrifice. Our soldiers sacrifice every day? Can we elevate self-patriotism to action?

Alas, in the modern days, patriotism is replaced by positioning, jamborees, shouting at India Gate lawns, candle light marches and discussions alone. Beyond that, a simple call to the shouting brigade to be ready for sacrifice will see many seats are being vacated…. All related and unrelated actors – street leaders, self-styled Gurus, actors, lobbyists, social media, mainline media and sometimes even politicians – pontificate on each and every national problem. Yes, this is ‘patriotism’ that most relate to. It is the same bunch each time, everywhere. Little wonder, nothing changes and the life moves on.

The difference between influence peddling and patriotism has to be called out and understood. India is being bled through a million cuts. Not all from weapons! Each one of us can be a soldier and contribute. How? Knowing and practising our duties; informed participation; and, using national resources for outcomes. All of us can’t join armed forces to prove our patriotism to the country. Whatever we do, if we follow our heart and intuition, each can contribute to the nation-building and thus be truthful and patriotic. Yes, this requires courage!

SKOCH is making an earnest attempt at rallying patriots and galvanising them to do their best for the country. Cyber Patriotism, MSME Patriotism, Economic Patriotism and Corporate Patriotism in this context assume extreme importance. SKOCH has constituted Task Forces around all these four areas, calling all the patriots to contribute their bit towards this monumental effort.

The first and foremost thing about patriotism is that everyone should follow their duties and responsibilities. In whatever profession we are, there are certain responsibilities to the society and the nation. The Constitution of India lists 11 Fundamental Duties that must be followed by every citizen. The Fundamental Duties are listed in the Part IVA of the Constitution.

Patriotism is practised by different sections of the society in different ways, whether citizen, corporates or policymakers. Legally speaking, the Fundamental Duties provide moral and ethical basis for the behaviour of citizens. These are not enforceable by the judicial pronouncements alone. It should be backed by legislation of the Parliament. There have been instances where the Judiciary or the Executive have tried to enforce certain duties. Recitation of the National Anthem in cinema halls, Madras High Court’s directive to schools and Government and private offices for the compulsory singing of Vande Mataram are some of the examples. These are indeed acts of instilling a feeling and sense of patriotism. On the other hand, one can’t prove his patriotic credentials just by saluting the tri-colour, reciting the National Anthem and raising slogans like Bharat Mata Ki Jai. Patriotism has to be practised. Be it armed force personnel, doctors, engineers, politicians, shopkeepers, barbers, cobblers, bankers or entrepreneurs, everyone contributes in the nation building in their own way. Practising patriotism then means all stakeholders discharge their duties and responsibilities honestly, whether individually, collectively or being a corporate citizen.

India’s cyber security is constantly under threat. As we digitise, conventional armies are being replaced by cyber armies and crime and terrorism is increasingly becoming cyber. India’s level of preparedness against emerging cyber world order and increasing rate of cyber-crimes, cyber monopolies and the threat of a potential cyber war has multiplied manifold. Most of all, we must develop the ability to legislate without legislative capture.

India needs strategy and policies – at the national, corporate and individual levels. Also, this is needed across verticals – Fintech, internal security, social and information technology. The nation needs a whole new regime of international diplomacy and multilateral negotiations when data becomes a protected commodity – such as for privacy and data localisation. Capacity for doing this has to be pooled from across the country. SKOCH Cyber Security Patriots Task Force is one such maiden effort that is pooling this knowledge and talent that essentially lies outside the government systems. This is being achieved by putting together 1,000 top CISOs from across domains to contribute and devise a cyber strategy for the country moving forward.

MSMEs are the lifeline of the economy. They are a source of livelihood for millions of Indians. MSMEs, including kirana stores, are folding up. On the one hand is the MNC onslaught and on the other is big Indian business wanting to monopolise. The policy environment has never been conducive to the growth for MSMEs. Credit, market access, compliances, hiring and retrenchment are all tied up in knots. While all this has been lamented often, there is no repository of what needs to change. India’s economic security can come under threat unless the vulnerable businesses gain strength. SKOCH has set up an MSME Task Force to identify these bottlenecks and recommend policy changes for MSMEs to grow, flourish and contribute better to economic growth. This, in an attempt to create a knowledge-based argument on what needs to change to protect and promote MSMEs.

Macroeconomic stability is a precondition for economic growth. Key macroeconomic indicators pose no significant challenges at the moment, however, as had become clear by the rupee’s depreciation in 2018, that India is still not immune to emerging-market turmoil. The relative external resilience stemming from strong foreign reserve buffers (equal to 7 months of current external payments) is balanced by the high public debt position, a weak financial sector and some lagging structural factors that come into play at the smallest shock. The current account deficit expected to be 2.3 per cent in 2018-19 and the economy’s dependence on net oil imports leave little room for complacency. Limited available indicators also point to a rise in unemployment. SKOCH is forming an Economic Patriotism Task Force to suggest implementable measures into fiscal correction in order to build economic momentum in times to come.

What is patriotic corporate conduct? Besides fewer scams, paying taxes honestly, not being a willful defaulter and not adding to Non-Performing Assets (NPAs) of banks, of course! Surely patriotic corporates must go beyond narrow financial interests and embrace best-in-class governance standards. Industry has forgotten that its stakeholders are not just its shareholders. There is a need to grow the pie, not just your own slice of it and to share it equitably with all stakeholders. Are we ready to create and embrace a new charter of corporate governance that would safeguard and strengthen our economy? Corporates too have a duty to secure India.

Corporates with deep pockets also try to influence the policy through their so called corporate social responsibility (CSR) mandate and practices. If well implemented with right intent and spirit, CSR can be one more act of Corporate Patriotism. But if it is done just to further one’s business and personal interests then it can’t be an act of patriotism.

There is growing debate about patriotism during this election season. With a view to gain support of a particular section of the society political parties are trying to redefine or manipulate the concept of nationalism and patriotism.

Patriotism is about love for the country. It can’t be selective. It can’t be my way or your way of patriotism.

It is something that everyone needs to practise.

It shall be the duty of every citizen of India: