Tamil Nadu, one of the richest states of India, is a pioneer in using modern technology in the delivery of social security services and good administration. Several pioneering steps taken by the Government have made administration more transparent and responsive. 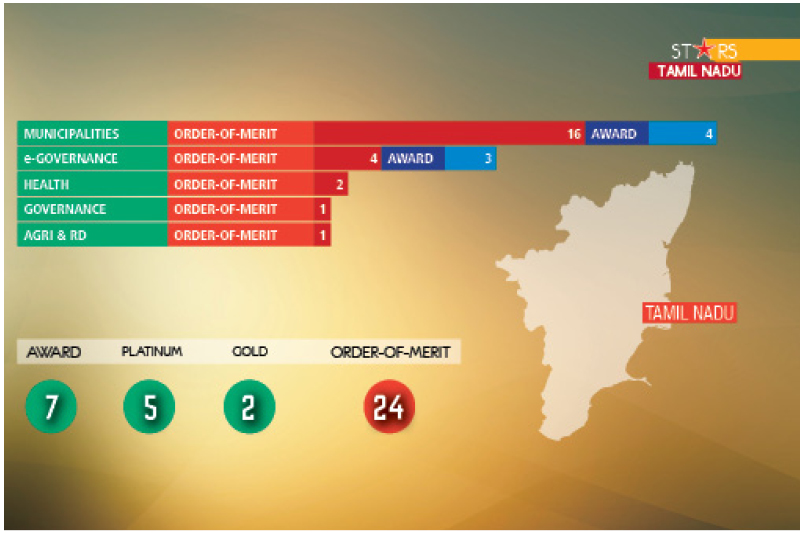 Tamil Nadu, one of the richest states of India, is a pioneer in using modern technology in the delivery of social security services and good administration. Several pioneering steps taken by the Government have made administration more transparent and responsive. Impressive steps have been taken at different levels from Chief Minister’s Office to Municipalities. The size of Tamil Nadu’s economy is the second largest after Maharashtra. On the back of high economic expansion, Tamil Nadu dethroned Uttar Pradesh a couple of years back to become the second largest economy in the country. Per capita income of the State is much higher than the national average.

The Gross State Domestic Product (GSDP) is estimated to grow at 8.79 per cent in 2015-2016 as against the all India Gross Domestic Product (GDP) growth rate of 7.57 per cent at 2011-2012 constant prices, according to the 2016-17 Budget document of the State. The State registered an average annual Gross State Domestic Product (GSDP) growth rate of 8.01 per cent in real terms between 2011-12 and 2015-16. The per capita GSDP is pegged at $2339.9 for the fiscal 2014-15, nearly double of the national average. Per capita GSDP increased at a CAGR of 11.92 per cent between 2004-05 and 2014-15. Tamil Nadu is one of the most industrialised states in the country. It has diversified manufacturing sector and is the leader in several industries like automobiles & components, engineering, pharma, garments etc.

Impressive steps have been taken at different levels to improve service delivery and bring more transparency in the system. Government has set up over 10,000 e-Sevai Centres throughout the State, both in urban and rural areas. It has ensured easy access to various Government services for the common public. Over 1.5 crore people have benefited from this services so far. Chief Minister’s Special Cell has introduced Amma Call Centre, a round the clock grievance redressal system with the objective to provide a transparent, efficient and effective citizen responsive Governance. This 24×7 citizen response system acts as a single-point grievance recording and redressal mechanism for citizens. The Department of Agriculture has introduced a Comprehensive Input Supply Management System, under which the entire input supply chain of the department has been automated. About 880 Agricultural Extension Centers spread over in 385 blocks of 31 districts cater the vital inputs like seeds, fertilisers, bio-fertilisers and micro-nutrient mixtures.

Christian Medical College, Vellore has introduced hospital-based universal newborn hearing screening system. All newborn babies delivered in the hospital are screened by trained technicians using BERAphone between 24 hours and 72 hours after birth before the mother leaves the hospital. Newborns admitted in the neonatal intensive care unit (NICU) are also screened prior to discharge once their general condition is stable. The initiative helps in early detection of the chances of hearing loss and other related diseases.

District Rural Development Agency has taken innovative steps for elimination of open defecation. Under the scheme Village Panchayat Presidents have been trained and empowered to take full responsibilities of making their villages open defecation free. Tamil Nadu Handicrafts Development Corporation has undergone a complete transformation using Information Technology. The initiative has helped in enhancing the market-responsiveness and cost-effectiveness of the Corporation.

A number of innovative initiatives have been undertaken by Municipalities in the State. Tiruchirappalli City Municipal Corporation has achieved effective service delivery in water supply by deploying Supervisory Control and Data Acquisition (SCADA) System. The initiative has resulted in a substantial improvement in the water supply of the city. Works management module introduced by Greater Chennai Corporation provides a computing and work flow platform for the activities carried out in the Corporation. The Corporation has also introduced innovative measures for solid waste management.

Under Happy Child Project, Coimbatore City Municipal Corporation ensures that the children enjoy their childhood being happy, free of anxieties and fears and uncertainties about their future. The project aims to equip the younger generation with knowledge on basic hygiene, discipline, maintaining good manners and etiquettes, personality improvement including time, tension and anger management. Coimbatore City Municipal Corporation has also taken innovative steps for solar lighting for roads and parks. Madukkarai Panchayat has come out with Clean & Green Madukkarai—a solid waste management initiative. The project is implemented under a Community Public Private Partnership model.

To ensure transparency in administration and for effective delivery of services to the public, it is imperative that the modern technology is used extensively. In the budget for 2016-17 the Government has announced its intention to further strengthen governance through use of technology. The proposals include establishment of ‘State Resident Data Hub’ that will serve as a unified data repository of biometry enabled residents data derived
from the National Population Registry (NPR).