Tamil Nadu is the 7th most populous state in India with a population of 72.1 mn (Census 2011), representing 5.96 per cent of India’s population. During FY14, the Gross State Domestic Product (GSDP) of Tamil Nadu recorded growth (y-o-y) of 7.3 per cent and contributed 8.4 per cent to India’s GDP. 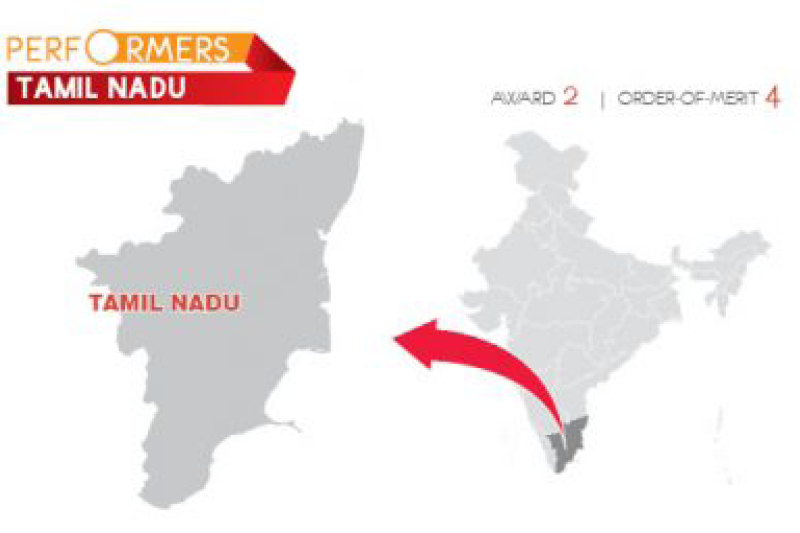 Tamil Nadu is the 7th most populous state in India with a population of 72.1 mn (Census 2011), representing 5.96 per cent of India’s population. During FY14, the Gross State Domestic Product (GSDP) of Tamil Nadu recorded growth (y-o-y) of 7.3 per cent and contributed 8.4 per cent to India’s GDP. The state is amongst the most urbanised states in the country, with 48.5 per cent of the population living in urban areas. Tamil Nadu is one of the most industrialised states in India and one of the fastest growing State economies with an average growth rate of 9.75 per cent in the last 9 years. Administratively, the state is divided into 32 districts. The state won four SKOCH Order-of-Merit and two Awards. Both Awards were bagged by the Municipality category while Merit was awarded for the Finance and e-Governance categories.

The Municipalities category saw both the Order-of-Merit awardees won the Award. These cities were, Tiruchirappalli City Municipal Corporation and Coimbatore City Municipal Corporation. The awards were for Achieving Operational Excellence in Waste Transportation Using ICT Based Solutions and Decentralised Solid Waste Resource Management projects respectively. Taking the Tiruchirappalli example, the objective of the project was to establish a systematic approach for monitoring the waste collection and transportation, using modern ICT technologies and to re-engineer and automate the waste collection and transportation using set of automated business processes. As a result of the implementation, there has been a reduction of 33 per cent in the number of vehicle trips for garbage collection and disposal, 23 per cent savings on fuel and saving of 60 trips per day. According to the Swachh Bharat Rankings, Tiruchirappalli secured the 2nd Rank in the country.

In the Finance section, the Commissioner, Revenue and Finance, Corporation of Chennai was awarded the Order-of-Merit for the ‘e-Services and e-Collections of Revenue’ project. Prior to this implementation, the dues were collected manually by tax collectors. With citizen friendly options now in place for tax payments, these problems have been ameliorated. On a spend of approximately R40 lakh for the entire project, collections have improved by 30 per cent within a year and this is expected to grow in the coming years.

Finally, in the e-Governance category, the Tamil Nadu Minerals Limited (TAMIN), a government owned enterprise implemented the Quarry Management System (QMS), which was given the Order-of-Merit this year. This helps the e-Governance initiative by way of measurement checking of granite blocks by digital photographs uploaded on daily basis and this helps to avoid revenue loss to the company. QMS sets the standard for effective utilisation of men and machinery and any shortfall in utilisation is indicated in the next-day report and this helps the management take appropriate timely action.

Under the National Population Registry (NPR) project, the highest bio-metric coverage amongst all the States in the country has been achieved in Tamil Nadu for Aadhaar linkage. This Government also proposes to establish a Data Analytics Unit in collaboration between the Department of Economics and Statistics and the Tamil Nadu e-Governance Agency to analyse, in real time, the large volume of data available with the Government to enable improved policy making for better service delivery. Tamil Nadu will be the first State to establish such a unit. Further, the state is planning to develop it as an innovation hub and the knowledge capital riding on the strength of its world-class institutionas and high quality human telent.