Karnataka: Known for its Pioneering Initiatives 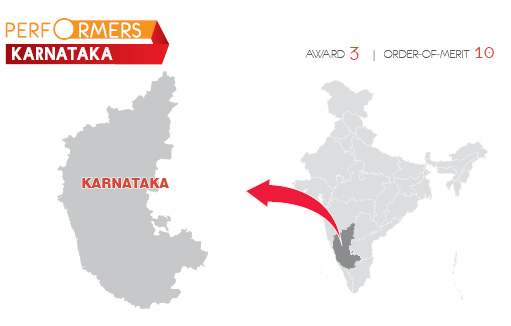 Karnataka is home to 6.11 crore inhabitants, which accounts for 5.05 per cent of India’s population and has 5.83 per cent of India’s geographical area. Karnataka’s Gross State Domestic Product (GSDP) at constant (2004-05) prices is expected to grow at 7.0 per cent and reach Rs 34,4106 crore in 2014-15 from Rs 32,1455 crore in 2013-14. Best known for its software and biotechnology industry, Karnataka has also been one of the leading industrial states in India. The state’s capital, Bengaluru (Bangalore), is popularly known as the ‘Silicon Valley of India’.

Beginning with Municipalities, the Municipal Corporation of Bealgavi won an award for Integrated Municipal Solid Waste Management facility and Corporation of the City of Belgaum for Utilisation of ground water to augment surface water through revival open wells in Belgaum City. The Belagavi project is concerned with the correct management of about 200 TPD of MSW (Municipal Solid Waste). Technology adopted is aerobic composting process for bioconversion of organic waste. The Belgaum project or the Open Well Project represents a local initiative undertaken through local innovation to radically transform a public service to solve a local problem and benefit a Tier II city. Today, as a result of the rejuvenation, the local potable water needs of as many as 173,000 citizens of Belgaum are now being supported through local resources: the 15 revitalised communal wells.

Aerospace, Automobile, Cement and Steel sectors are poised to become growth drivers for the state

The next category that won Karnataka the award is Transport, where Karnataka State Transport Corporation efforts to “Organise public transport city buses for small and medium towns and cities” bore outstanding fruit. With the objective of developing efficient public road transport systems, Karnataka State Road Transport Corporation (KSRTC) has successfully implemented this project so that today the project is operating in 12 cities, with 564 schedules and 9,016 trips per day having a load-factor of 70.71 per cent and is now being planned for roll-out in another eight cities. KSRTC won an Order-of-Merit for its Staff Duty Rota System and Leave Management Kiosk System and another for its Fly Bus system project.

In the e-Governance category, the Centre for e-Governance won the Order-of-Merit for Karnataka Mobile One; C-DAC for Karnataka Cloud Vault, SuMegha Scientific Cloud Stack; Directorate of Economics and Statistics for e-JanMa (Online Registration of Births, Deaths & Still Births) while Canara Bank won the merit for Smart e-Governance.

Regional imbalances in Karnataka have been an area of concern hindering the state’s sustainable economic growth. The income generated from industries is largely concentrated in a few districts in the state, especially Bengaluru Urban. This results in a lop-sided growth in manufacturing sector in the state. In order to reduce the regional imbalances, the Government of Karnataka needs to provide equal opportunity for industrial
and urban development in every district/zone and create job opportunities for youth and women. The state already enjoys the status of a favourable investment destination. It has been ranked No 1 by the World Bank for its investment climate.