From land records or registration to registering a new birth and getting an affidavit for income, all e-transactions in the country are now captured by the web portal e-Taal. Developed by the Department of Electronics and Information Technology (DeitY), the portal aggregates and analyses the transaction statistics of central and state level e-governance projects, including Mission Mode Projects, on a real-time basis. 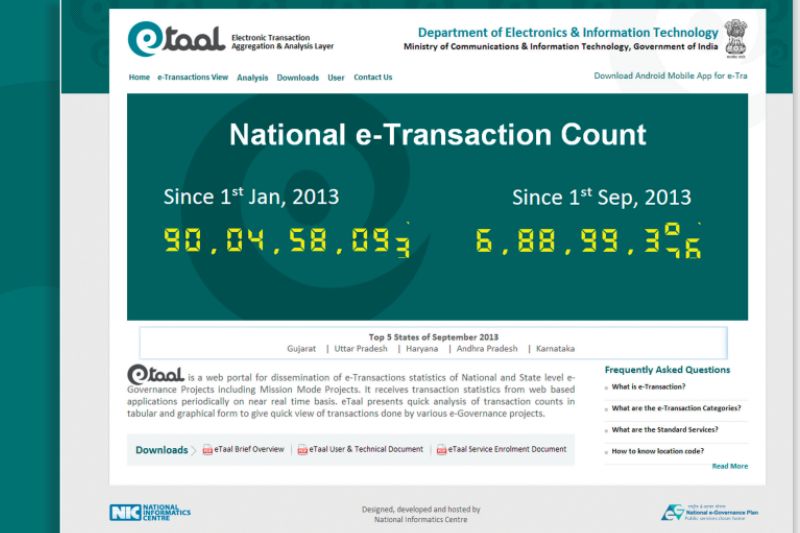 From land records or registration to registering a new birth and getting an affidavit for income, all e-transactions in the country are now captured by the web portal e-Taal. Developed by the Department of Electronics and Information Technology (DeitY), the portal aggregates and analyses the transaction statistics of central and state level e-governance projects, including Mission Mode Projects, on a real-time basis.

Considerable progress has been made by various Central Ministries and State Governments in deployment of IT for delivering services to citizens. With the introduction of NeGP including 31 MMPs, a remarkable improvement has been achieved in terms of reduction in response time and ease of access to citizens. However, it was noticed that while some of the applications have internal performance measurement mechanisms defined through Service Levels and Key Performance Indicators (KPIs), there is no standard government-wide criterion or metric to evaluate the impact of all initiatives.

For performing an analysis of the number of citizens being served by an application, the user would have to request the technical team to pull out the relevant data. Similarly, performing a comparative analysis of the usage of the application with similar applications or in different regions was a daunting task. Thus, a need was felt for a mechanism which would enable consolidation as well as analysis of delivery of services through different e-Governance projects. The number of end-to-end electronic transactions was identified as the best indicator for measuring real-time performance of e-Governance services in terms of service delivery to citizens.

The portal (etaal.gov.in) was devised in order to develop an outcome orientation amongst the e-governance initiatives in the country. It provides a national dashboard displaying the statistics of services provided under different categories. The e-Taal project is based on the principle: “You can manage effectively, what you can measure”.

An e-Transaction is a transaction delivering public service using ICT tools to improve access, enhance transparency and reduce response time while also satisfying all of the following four conditions:

a. Service is requested through electronic means, including mobile devices

b. Workflow/approval process is electronic

E-transactions in services which relate to mere exchange of information are not counted as e-transactions, for example, display of static information, visits to a website, etc. Apart from standard services, in several instances, the relevant information is proactively collected, digitised, verified and stored in digital repository. When the citizen requires the service, he/she can avail it immediately across the counter. Since, such cases fulfill all the pre-requisites of an e-transaction, these can be considered as Across-the-Counter services.

e-Taal updates the transactions as they happen, whether in Kerala or in J&K or in north-east Tripura. So every three seconds it refreshes. It currently connects 300 plus servers. One can drill down to the transaction level, state level, service wise, time series wise – anything is possible once you have the basic transaction data.

At a glance, one can see the number of transactions is running into hundreds of thousands. This is the kind of measurability that has been brought about with regard to e-governance in the country. One can opt for a transaction view, whether it is birth certificates, death certificates, or land records. One can separately access data pertaining to central sector projects and state sector projects.

Health, postal services and telecommunications contribute the maximum to central government e-transactions. As of September 2013, Gujarat topped the list of states using technology for public services, followed by Uttar Pradesh, Andhra Pradesh, Haryana and Karnataka. Interestingly, Gujarat, which ranked eighth last year, improved its ranking in the first half of this year. But, a senior state IT department said, “It’s not that the transactions have increased overnight. We have developed a system to link all transactions on the portal which has resulted in the spurt.” Even in terms of providing e-services across the counter, Gujarat tops the list with over 50 per cent e-transactions of the total 101.8 million recorded under this category during 1 January to 26 July.

The NeGP, one of the largest e-governance initiatives in the world, spans central, state and local levels of government involving multiple authorities at various levels and is changing the way people access public services. With its single window concept, one can access most public services closer home at an affordable cost.