Policymaking for a $5 trillion economy

In the backdrop of falling automobile sales, manufacturing output dipping across various sectors and even sunrise sectors like FinTech facing the regulatory onslaught, economists, policymakers and bureaucrats are focusing on realising the goal of a $1 trillion digital economy out of the $5 trillion target set by the finance minister. 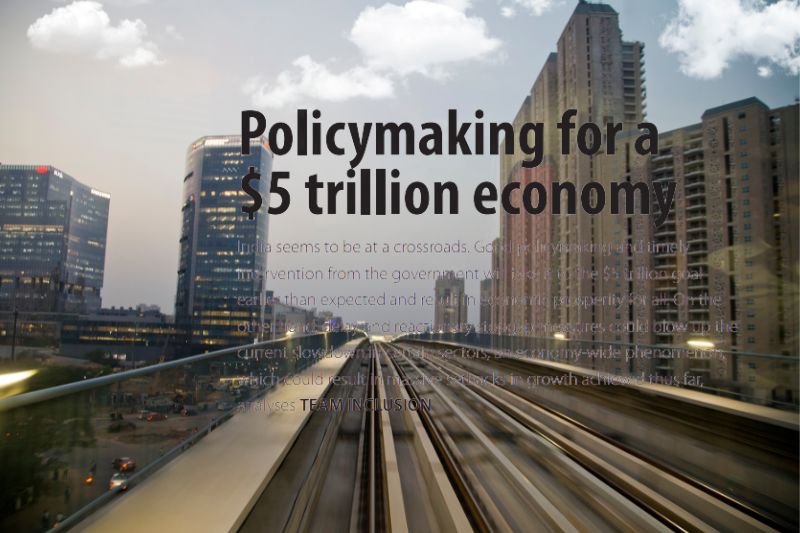 In the backdrop of falling automobile sales, manufacturing output dipping across various sectors and even sunrise sectors like FinTech facing the regulatory onslaught, economists, policymakers and bureaucrats are focusing on realising the goal of a $1 trillion digital economy out of the $5 trillion target set by the finance minister. For this to happen, the financial technologies sector is going to play a catalytic role. But, the road isn’t always easy with the National Payments Corporation of India (NPCI) acting as both a competitor in the market and the regulator at the same time.

“We have no idea if NPCI is a service provider or a regulator. You can’t have a regulator that’s also competing in the market. The entire FinTech dream was the Aadhaar dream. Now even that’s in danger after the recent judicial activism. There is a need for wider consultation on important issues such as these and a sociological angle is very important to consider,” said Sameer Kochhar, Chairman, SKOCH Group.

Agreeing with the assertion, Ravi Rajagopalan, Founder & CEO, Empays Payment Systems, said that as a FinTech entrepreneur, there are both positives and negatives of working in India but the bottlenecks in policymaking must be removed and grey areas need to be reduced for the industry to flourish.

These grey areas come in many forms. For a decade, there was a consistent confusion about the legal status of Aadhaar and what can and cannot be done with the public good that forms the basis of the ever-important India Stack. With the recent SC judgement outlawing certain use cases such as e-KYCs, business models are under threat.

Even now there’s a need to be more consultative and there needs to be a consistent plan for people manning the new-age systems, said Tanuj Bhojwani, a volunteer with iSPIRT, a think-tank, which works on the Aadhaar stack.

“This new approach is not very well understood by policymakers and the bureaucracy. People manning this have very little time to understand something and then they are moved out. It’s a helpless merry-go-round. Of course, we would have been more participative and more consultative but we should also depoliticise a few things,” Bhojwani said.

Meanwhile, economist Laveesh Bhandari was of the view that the government has outlawed technocrats and policy experts in favour of faster decision-making, which has its own set of pitfalls as evidenced during the policy back and forths observed in the digital industry recently. He called for the experts to be heard again and given a patient ear.

“This is a time when an expert or a technocrat is of no use. Laws used to be drafted with far more care than right now. But the $5 trillion economy requires that experts and technocrats need to be given a more patient hearing. The boundaries of things need to be well defined in the industry,” Bhandari explained.

While the digital economy is likely to continue to prosper despite the hindrances in policy and regulatory regime, it’s the manufacturing sector that we must be concerned about, agreed experts. The share of manufacturing in the GDP hasn’t shown strong growth in years and core-sector output data remains muted. Even as the government is pushing programmes like Make in India, Mudra Yojana and Ease-of-Doing Business, the progress on boosting the manufacturing sector has been slow.

But the $5 trillion goal has a key component of at least $1 trillion that must come from the manufacturing sector. It’s probably the hardest part of the puzzle but experts such as Sanjay Jaju, Joint Secretary, Department of Defence Production believe that a major piece of the manufacturing output must come from defence production and aerospace. Jaju put the number at an ambitious $25 billion and said that it’s crucial that both these sectors develop within the government’s framework to manufacture indigenously.

So far, India has been one of the biggest defence products importer. However, that is set to change with the government’s liberal policy and policy boost to manufacturing in the country.

“When we make policy, we have to make sure that the policy is aligned with a coping mechanism that is required. Buy Indian-Designed-Developed-Manufactured is the default mode in the defence department now. The defence and manufacturing economy should remove the uncertainty piece by exporting to the global arms market now. We are looking at $5 billion from exports. We are currently at $2 billion, which were $200 million 10 years ago. It will make us competitive and also allow our companies to grow fast,” said Jaju. He said that the second piece of the puzzle is civil aerospace, which is going to give huge dividends in the future if the indigenous industry is allowed to flourish.

“India’s civil passenger volume will be the third-largest in 2020. We have to add 2,000 aircrafts in the next few years. Forty-nine per cent investment can be brought in through the automatic route and 100 per cent, through the government route. Last bit is to create clusters because defence and aerospace only work with clusters,” Jaju said.

Meanwhile, there are things in the country, which are working very well too. One shining example is the Ayushman Bharat programme, which covers medical costs for more than 50 crore poor in India. The programme has already helped more than 4 million people and saved them hundreds of crores according to the government estimates.

“There’s a certain amount of clarity with the way things are moving. We are looking into standard treatment workflows. All of a sudden 50 crore people are able to access a private hospital. We want to have as much objectivity as possible so that the industry is also able to have a predictable format in the future,” he explained.

Meanwhile, V N Alok, Associate Professor of Public Finance at the Indian Institute of Public Administration, said that the government has to necessarily listen to technocrats and be more proactive in clearing up regulatory bottlenecks.

“Modi 1 was clearing the systems and Modi 2 is the growth part of it. The government wants to put things on the fast track. The literature written by experts like Amartya Sen has no place now because the government is very decisive. Bureaucracy has to be more functional by removing hurdles in decision-making,” he proposed.