Climate change is upon us. Drastic and globally-coordinated emissions reductions are urgently needed. This summer was the hottest in a century. With each passing year, temperatures are rising leading to an unprecedented melting of snow and longer summer months. On the one hand, we have draughts and on the other, flash floods. India is most vulnerable to climate change. What does it mean in context of Modi Government’s economic growth projections, reports TEAM INCLUSION 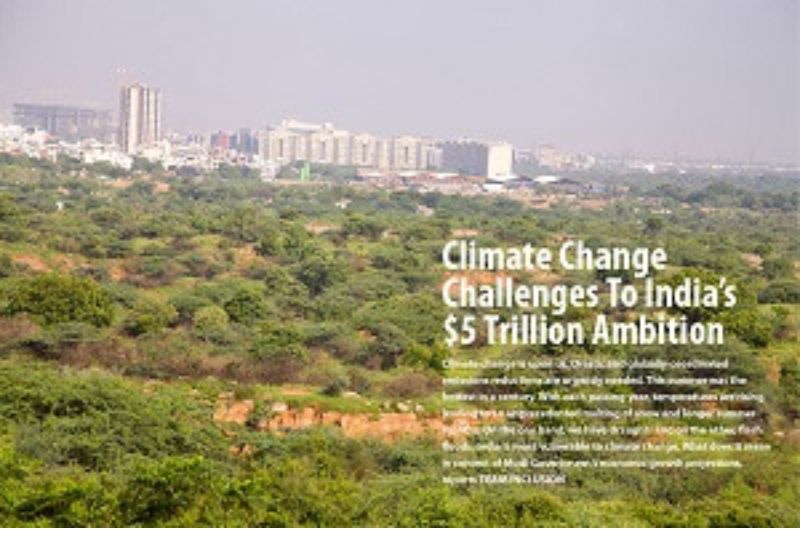 Heavy monsoons this year claimed at least 300 lives in states of Kerala, Karnataka, Maharashtra and Gujarat alone within a span of two weeks. A million people displaced in these four states. With almost 12 per cent of India’s geographical areas prone to frequent floods, large masses reeling under drought, and one of the highest densities of economic activity in the world, India is among countries most vulnerable to climate change today. With pressure on India’s water, soil, air and forest expected to become highest in the world by 2020 according to a World Bank report, what will this mean for the $5 trillion economy goal set of the Narendra Modi government? For a developing economy, is it inevitable that environment be a short-term trade-off to reach the ambitious target?

Social anthropologist G B Panda shared his experience of  working with tribal communities at grassroots levels for past three decades and their struggles for Jal (Water), Zameen (Land) and Jungle (Forests). He reminisced that growing up in villages climate change is seen to be a direct concern for people who made collective efforts to find solutions to a green community and protect their lands. However, with the passage of time people have detached from community solutions and are dependent on government programmes, he underlined.

Rajat Kathuria, Director and Chief Executive, Indian Council for Research on International Economic Relations (ICRIER) stressed that for the longest time both developed and developing countries treated climate change like someone else’s problems. But while India needs to continue on its climate change agenda on the international stage for requisite financing and technology transfer, he cautioned that domestically there should not be any question of trade-off between climate and economic goals. “It is no longer a two horse race domestically – we can’t have trade-off between our climate and economic goals,” said Kathuria. “$5 trillion goal should be an aspiration, not an obsession at the cost of our climate change concerns,” he added.

The debate became relevant close on the heels of six of the G7 countries that met in France pledging $20 million to fight the blazing Amazon rainforest fires. Donald Trump though was conspicuous in his absence at the session on Climate Change and Biodiversity citing meetings with German Chancellor Angela Merkel and Prime Minister Modi. Yet, surprisingly both Modi and Merkel were actually present at the session. Asked about the attitude of President of the global super power towards Climate Change and Global Warming issues and how it augurs for developing countries including India, Kathuria responded that Trump could be blasé because US has resources to deal with the challenges. However he cautioned, that India cannot hide behind per capita GDP numbers and make the poor more vulnerable.

Jay Cheema, Partner, Projects, Energy & Natural Resources at law firm Cyril Amarchand Mangaldas drove home the point that it is no more about India’s diplomatic obligations to the outside world but about staying true to climate change commitments including Paris accord for its own growth and needs. Cheema quoted noted American scientist Guy R McPherson- ‘If you think the economy is more important than the environment, try holding your breath while counting your money.’ However he argued that for India’s $5 trillion growth project legal frameworks and political or local motivated agendas using shield of ecological concerns is a real hurdle. Citing M C Mehta vs Union of India case in Supreme Court in the 1970s and recent M C Mehta Vs Kamal Nath case, he reminded that rights of forests, animals, plants, habitats, flora and fauna are also enshrined along with those of citizens under Article 21 of the Constitution. And this means a challenge for the government in doing a balancing act while devising policies on manufacturing, service sectors or industries. “What derails development process is that there is not a comprehensive package – we approve a project, central government approves, state governments approve, but the real problem then comes with pollution control to local thugs. Local lords start interfering. Look at the kind of PILs before Supreme Court and National Green Tribunal,” he said.

Citing the Krishna-Godavari and SNL disputes he added that question is how to deep dive into such complicated issues and ensure equitable distribution given water is a state subject. “There is multiplicity of state and central governments in terms of meeting some of the standards and processes you have to follow. There are enough rule books but we need to rationalise through a comprehensive national policy,” said Cheema.

When asked whether there is a need to reshuffle the concurrent list and bring climate change subjects under the Union list, Cheema felt it was unnecessary since federal legislation processes have worked well for a matured economy like India. Sanjaya Baru, prominent economist and former Media Advisor to former Prime Minister Manmohan Singh, suggested that National Development Council (NDC) and Planning Commission be revived to improve cooperative federalism.

Arvind Kumar, President, India Water Foundation and Governor of World Water Council, focussed on the water scarcity threat facing India arising out of rapid urbanisation to industrialisation. He reminded that ground water has depleted in almost ten states today and need of the hour is applying global financial and technological solutions locally. “In Delhi there were more than 2,000 water bodies at one point but how many are left now? So wetland committees are creating some norms for states,” he said. He also batted for river linking and desalination projects.

Projecting a contrarian view Gursharan Dhanjal, Editor, INCLUSION, argued that $5 trillion economy would mean more finance required for protecting industry and environment both. He underlined the need for MSMEs that contribute up to 36 per cent of GDP to be given a push and for alternatives and micro managing before industries like chemicals are disrupted citing climate change concerns. Dhanjal reminded that for all the hue and cry over the Mumbai bullet train project, the Delhi metro was executed with maximum advantage to ecology and environment and did not prove to be a disaster. He underlined that India needs to be prepared to maximise on opportunities arising out of the global trade wars, which is forcing industries to relocate.

There is need for India to find alternate agrarian solutions since 80 per cent of freshwater in India is used by agriculture sector.  There is also a need to find transition to alternate crops given water scarce states like Maharashtra and  Punjab are growing water guzzling crops like sugarcane and rice. This would require political dialogue as well. There is equally well a need for a social security architecture to deal with  displacement and migration. And improvement in quality of tax to GDP ratios to create fiscal space for making climate change technology affordable to citizens.