Supporters as well as critics of ModiNomics agree that the target of $5 trillion economy is challenging but achievable. The issue is not just about achieving the target of a particular size of the economy. It’s a wider issue of how do we achieve it and in the process what happens to the critical challenges… 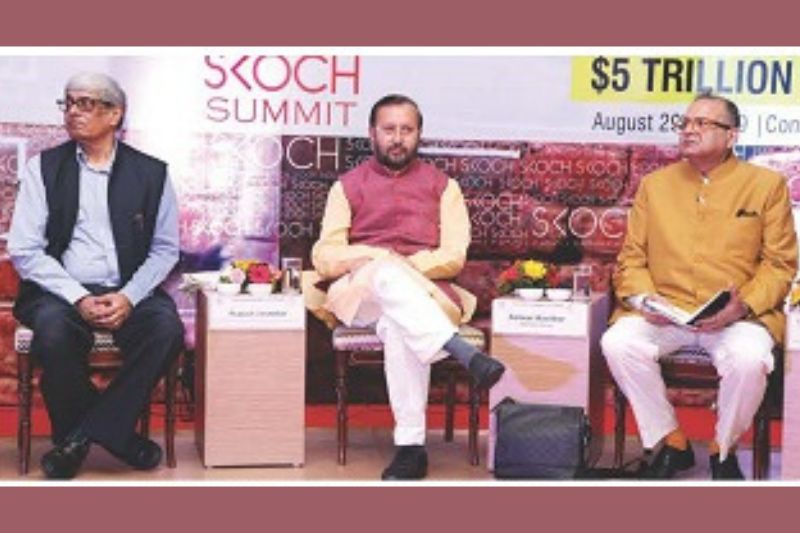 Supporters as well as critics of ModiNomics agree that the target of $5 trillion economy is challenging but achievable. The issue is not just about achieving the target of a particular size of the economy. It’s a wider issue of how do we achieve it and in the process what happens to the critical challenges that the country faces like poverty, inequality and jobs. The road to $5 trillion economy should be used to create a highway for reaching the next level of expansion, say $10 trillion and $20 trillion in a particular time-frame. Towards the end of 2018, India 2030: A Socio-Economic Paradigm book, published by SKOCH Group, pitched for $10 trillion target by 2030.

This requires a two pronged strategy. First, accelerating the growth to the level of 8-9 per cent in order to reach the magic figure of $5 trillion by 2024-25 and the next level of $10 trillion by 2030. Exact required growth rate can not be determined as it will also depend to a great extent on the rupee-dollar exchange rate. In the recent years, the economy has grown in the range of 7-8 per cent. Clearly, the growth rate needs to be substantially accelerated. SKOCH has been arguing that improving ICOR or capital efficiency is an important factor that could accelerate the GDP growth.

There is a strong correlation between ICOR and GDP growth. During the financial year 2016-17, the GDP growth accelerated to 8.17 per cent while the ICOR declined to 4.07. The ICOR rose to 4.69 in the fiscal 2017-18 leading to a sharp drop in the GDP growth to the level of 7.17 per cent. The ICOR rose further to 5.07 leading to a further slowdown in the growth rate to the level of 6.81 per cent in the year 2018-19. In the past one decade the ICOR was highest at 6.6 in the year 2012-13. During that year the GDP growth was the worst at 5.46 per cent. All the above mentioned data is as per the new 2011-12 series. A close look at the ICOR and GDP growth indicates that whenever there is decline in ICOR, the economic growth accelerates.

There could be two ways to ensure efficient utilisation of capital. The first is ‘less-capital, high-return’ and the other one is ‘high-capital, very high-return.’ Technology and innovation-led businesses often result in very high returns. Although, it may not be very job generative. But, huge number of jobs can be generated in the downstream businesses over a period of time.

The second equally important aspect to keep in mind is sustainability. For example, Indian tech professionals are being used extensively to feed Machine Learning (ML) or Artificial Intelligence (AI). It has created few jobs even in Tier 2 and Tier 3 cities. It is good to see that some people have got jobs. But, are those jobs sustainable? The companies sitting in the US and Europe and even China are using Indian human resource to develop ML models. Once the machine learns, it will start functioning independently and those who are feeding in the intelligence of the machines today would become redundant. Here we are not arguing that we should not adopt AI and other modern technologies. We must do that. But the control of the machine intelligence created by the Indian human resource must remain in the Indian hands.

There are two aspects to the businesses – one is value creation and the other is value capture. While a large number of Indian firms have succeeded in value creation, they have largely failed in value capture. Take the example of Indian aviation industry. It has created value for the customers, employees and the economy as a whole. But the carriers have not been able to capture the value. As a result two leading airline carriers have gone bust. Financial condition of other airlines is also not good. In fact, Boeing and Airbus make more money than all the carriers of the world put together. Clearly, Boeing and Airbus have captured higher value of aviation business.

Similarly, IT and IT-enabled services firms like Infosys, Wipro and TCS have created huge employment and value for the economy. However, they have not been able to capture the value, the way it has been done by the companies like Microsoft, Google, Apple and Amazon.

In some areas, we have managed to create high value businesses but the control is lost. Flipkart and Paytm are classic examples. These businesses were created by Indian entrepreneurs but are now controlled by foreign firms.

Addressing the 60th SKOCH Summit, Union Minister Prakash Javadekar echoed the concerns raised by SKOCH Group saying the control of the firms created by Indians must remain in Indian hands to ensure sustainable and long-term benefits to the economy. “In every team of Google, in every team of Facebook and in other places also wherever there have been innovations in the world, there have been Indian scientists and technical people. We are contributors to innovation but we are not owners of innovation, that is our problem.

“The second issue is that how we will sustain our own innovation. Paytm or Flipkart are Indian innovations; Indian ownership, but taken over by foreign entities. By doing so, such innovation has closed its doors of making sustainable profit for the next 50-years,” Javadekar, who holds portfolios of Ministry of Environment, Forest and Climate Change & Information and Broadcasting, added.

Today, all the major economies of the world including the US and Europe are giving primacy to the domestic national interests. China has always been inward looking. Russian President Vladimir Putin recently remarked that liberalism has “become obsolete”. While Putin’s comment may sound very alarmist, the global trends confirm to his contention. When all the world powers are pitching for economic nationalism, India can’t afford to be an outlier. Our policies and interventions should be focused on promoting and protecting the national economic interests.

High value capture businesses are heavily dependent on research and development. Our businesses as well as the government lag far behind in R&D when compared with the global peers. There is need to strengthen the intellectual property rights framework. The fruits of private R&D must go to private sector. Needless to say that there is also need for public funded R&D to support MSMEs and Startups.