Economists of Leading Think-Tanks on State of Inclusion

India’s Top-5 economic think-tanks converge on a common platform provided by SKOCH that focuses on social and development-oriented issues to discuss the state of inclusion. A report by Team INCLUSION 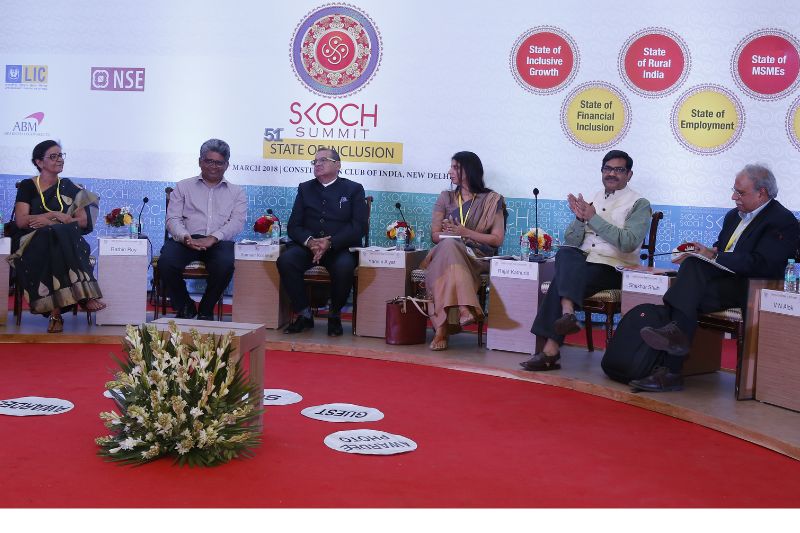 It’s not often that leading thinktanks that delve into the economic sphere in India get together on any other platform, of course, apart from discussing the annual Union Budget. But recently, leading economists of the country’s Top-5 think-tanks came together under the aegis of SKOCH Development Foundation, the premier think-tank on inclusion, poverty alleviation and empowerment-related issues, to discuss the State of Inclusion.

The common point made by the participants was that it is time to seriously innovate solutions to solve or address the country’s age-old problems. Some also urged that solutions should be arrived at with taking the government into the picture since the State doesn’t have the wherewithal for interventions.

Speaking on ‘Income and Inclusion’, Rathin Roy, Director, National Institute of Public Finance and Policy (NIPFP), said the concept of an unproductive universal basic income is an ambition doomed to fail. In the last 15-years, there has been a political consensus that growth should be participative for all people to contribute towards it. It is not inclusive at all when the rich are taxed and the money so collected is redistributed to the poor without involving them in generating the goods and services that would get them employment etc.

A part-time member of the Economic Advisory Council to Prime Minister Narendra Modi (PMEAC), Roy said without productive work, any call to universal basic income would be pointless.

The country has not been solvent just with taxation. The Government of India (GoI) usually borrows money to spend—mostly 3.5 per cent of the GDP every year and has peaked at 6 per cent. For every rupee borrowed, 70 paise is spent on consumption expenditure like interest, salaries and non-capital expenses.

Talking of the dependence on tax, he said India has a high tax-to-GDP ratio of 25 per cent. Any increase in tax will impact either consumption or saving.

SKOCH Chairman Sameer Kochhar noted the contrarian aspect of Roy’s views on universal basic income and tying it to a productive outcome. He said giving up on inclusive growth is giving up on growth itself. “At Skoch, we believe the big question itself is what inclusion is all about. For many years, we have been a platform dedicated to inclusion and inclusive growth. For us, it means only one thing and it is defeating poverty. All this debate and discussion is for the best way to defeat poverty. I have written and said enough that poverty in India is a policy flaw. If policy since Independence had been correct, we would not have been a poor country anymore. Not policy alone, political economy also plays a role in inclusive growth to ensure that its constituency and its votebank gets the due benefits,” he said.

Centre for Policy Research President and Chief Executive Yamini Aiyar, while speaking on Political Economy and Inclusion, said governments at the state-level and the centre try to outdo each other in trying to involve the stakeholders in decisions and in audits. But on paper, all this public participation amounts to very less since decisions are taken at a different level without an idea of the specific demands.

Aiyar cited the example of 300 building-less schools in Purnea, Bihar being forced to buy fire extinguishers as part of diktat even though they didn’t have a building. “They could have done things far more useful with the money,” she said.

Another example to illustrate the disconnect between public participation and actual decisions was highlighted. This time, in Panchayati Raj. In a study that took a year and a half to collate data of 30 Gram Panchayats in Karnataka, it was found that individual Panchayats have the power only to pass R20 lakh in a budgeted R6 crore outlay per annum. Similarly local government has no control over the money spent under its jurisdiction. There has to be greater decentralisation for inclusive growth.

Kochhar added that priorities for decentralisation vanish when the view is taken from up above, like at the state or central government level. This could be due to votebank needs or other reasons, he said.

Indian Council for Research on International Economic Relations (ICRIER) Director and Chief Executive Rajat Kathuria said industrial policy puts the question of protectionism back on the table. The recent statement of Chinese President Xi Jinping that Beijing would grow with Chinese characteristics pointed at a change in trade stance from the laissez faire textbook model.

India needs access to markets abroad for its products and also needs to protect its industry and workforce. Reiterating Prime Minister Modi’s statement that India’s number one challenge is to create jobs. Indians cannot afford to be poor. Industrial policy should create more jobs in the formal sector because employment data doesn’t account for jobs in the unorganised sector. While 5 per cent unemployment is good for the developed world, it just doesn’t include people who work in the informal sector in India.

Kochhar drew attention to the fact that protectionism and nationalism are being increasingly used in the same sentence and the economy may catch a flu, especially after US President Donald Trump’s entry into the White House.

India Development Foundation (IDF) Director S K Shanthi, speaking on Women and Inclusion, cited a study under Project Disha, which is being rolled out in Delhi, Haryana, Maharashtra, Karnataka and Telangana. The project aims to create a positive impact on the lives and livelihoods of 1 million women through skill development and by entrepreneurship. A World Bank study found that 800 million Indians earn and live on less than $1.9. Half of them are women.

Underlining the need for entrepreneurship, she said almost 90 per cent of the 15-59 age group of the population is educated less than the higher secondary level. They can’t hold meaningful jobs because they aren’t educated and therefore entrepreneurship and enterprise will be useful.

Micro-credit schemes need to look beyond safe returns to promote innovation. Among the banking system, the role of business correspondents (Bank Mitrs) came in for praise for their role in getting microcredit for farmers. Referring to a pilot project in West Bengal where the Bank Mitrs informed microfinance firms, which farmer to lend to on the basis of productivity in growing potato, he said this utilisation of a local resource to sharpen information was an enormous success since it enabled skilled farmers by getting them the loans.

The one-size-fits-all lending patterns in practice in the country like group lending kills the desire to innovate. The group is interested in working with people who shoulder the common objective and anybody trying to innovate is doing so by magnifying the risk of other individual farmers. With such a closed mentality to risk, there is no incentive to spur innovation ahead.

In his wishlist, Shah said the farmer needs to be freed from the Agricultural Produce Marketing Committees, which makes creation of new marketing channels imperative and ensuring that the farmer makes as much or more money than the middlemen. Prime Minister Narendra Modi’s call to double farm income by 2022 is a welcome clarion call.

Farmers should be the focus of decision-making and not the urban consumer. When the time comes to boost farm output, after doubling farm income, it should be done with measures to prevent a fall in prices and demand. For this, better processing facilities, cold storage and modern warehousing facilities will be required and need to be invested in.