India to be on a Higher Trajectory of Inclusive Growth in our Lifetime,
says Sameer Kochhar 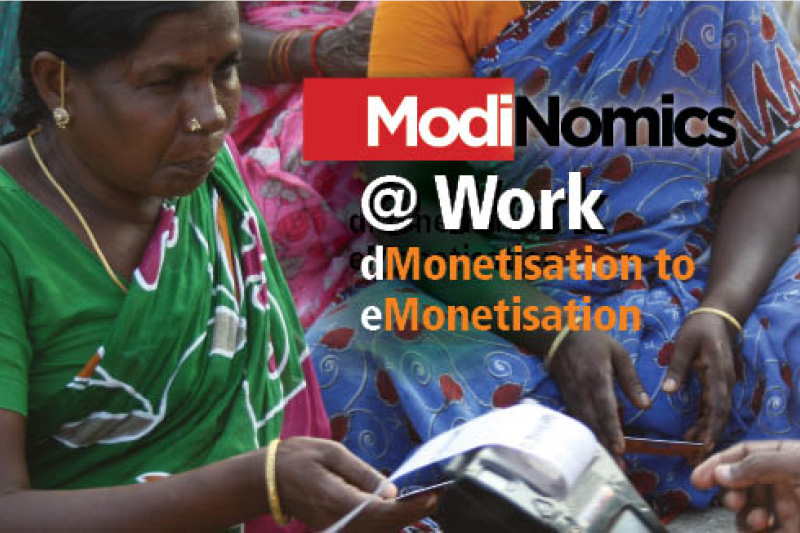 On 28 January 2014, P Chidambaram had said, Modi’s knowledge of economics can be put on back of a postage stamp. This is when I was completing my book ModiNomics. Having interacted intensely with both Modi and Chidambaram and having the highest of regards for both of them, I wrote in the book:

‘…opinions (of Chidambaram and Modi) may be divergent, but economics is the same…’

ModiNomics for the first time gave insights into the economic thinking of Modi. This was followed by Defeating Poverty: Jan Dhan and Beyond and the third book in the ModiNomics trilogy, Modi’s Odyssey: Digital India, Developed India.

These three together give deep insights into the unfolding of demonetisation and digitalisation story and the impact it is likely to have on inclusive growth. These are recommended readings for all politicians and all pro-poverty economists who have helped create deep chasms between the rich and the poor over the past seventy years.

I have often been found guilty of speaking bluntly. Last time, it was Arun Jaitley who called me blunt while releasing ModiNomics. India has changed just too significantly since 8 November 2016. As a reforms historian, I can authoritatively say that there have been other such significant moments in our history. Stock Exchange computerisation post Harshad Mehta Scam; N Vittal’s dictat on bank computerisation when he was CVC; and, N Sehshan’s insistence on Voter ID, to name a few. To quote one of the momentous speeches by Manmohan Singh as Finance Minister (24 July 1991) documented in my book The Untold Story of Indian Reforms:

“There is no time to lose. Neither government nor the economy can live beyond its means year after year. The room for maneuver, to live on borrowed money or time, does not exist any more… There can be no adjustment without pain. The people must be prepared to make sacrifices to preserve our economic independence and restore the health of our economy.”

The unfolding of Indian reforms that saw 200 million people come out of clutches of poverty followed this. Such a time is upon us again—in his speech on 8 November 2016, Prime Minister Modi has started the second struggle for freedom, a clarion call that every Indian must respond to beyond the best of their abilities. As the only Indian reforms historian, I have had the advantage of hindsight and I believe that such an opportunity would never come again for India. There can be no perfect timing, the burden of the 400 million Indians who remain in abject poverty, cannot be tolerated anymore.

Digital inclusion, financial inclusion and social inclusion are three pillars of inclusive growth; digital and financial literacy are huge problems; decentralisation is a completely unfinished agenda; Common Services Centres (CSCs) should be made Business Correspondents; cyber security is a looming threat—I have maintained for years that have become newsworthy only of late.

It was 1857, when the first War of Independence was waged. It was in 1947, that India attained Independence. Getting rid of poverty and exclusions is even a bigger war than the War of Independence. This cannot be waged without making sacrifices that will last a long period of time. The cashless way of living being the least of such sacrifices. The country needs far more!