Time to Act is Now!

After a long time, there is a sense of excitement amongst people, who are concerned about India’s future. There is a mix of aspirations, expectations and perceptions on what India should do, says Salman Khurshid 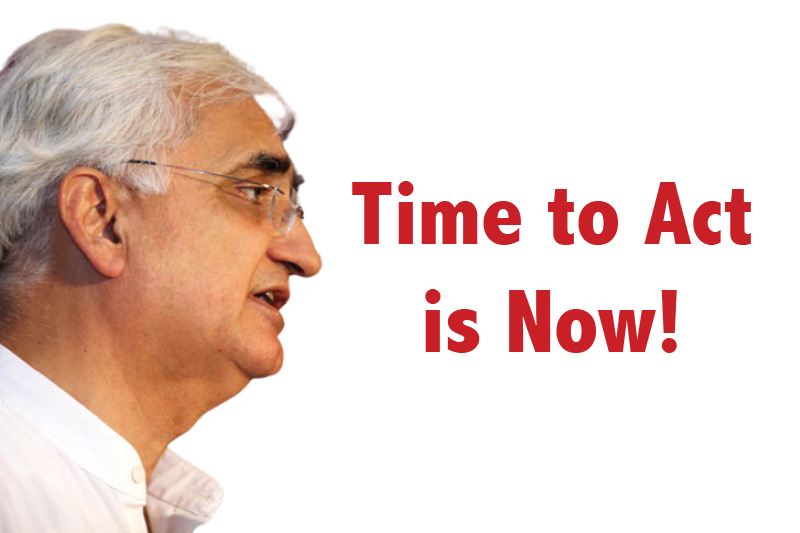 Only a few weeks ago a lot of questions were being asked about our intent, ability, commitment and determination to proceed with policy pronoucements, not only during UPA 1 and UPA 2 but something that dates back to 1990s when Manmohan Singh was Finance Minister who captained the unfolding of reforms agenda. Reforms are not something that can be done in bits and pieces. Each break in the reforms process means losing the entire ground covered so far. It has to be taken to its logical conclusion. But we must understand that there is no science to measure delivery of reforms to put it against any yardstick of expectations. It’s a process, a continuum.

What probably has gone wrong and requires introspection as much as correction, not at the cost of being misunderstood, is the fact that we pushed for reforms without being mandated at a popular elections. This is an intrinsic quality of our democracy – a complicated one at the same time – that we do a lot of good things for our country that do not go through a discourse and an anticipated approval. Certainly so, it does not get a mandate at the time of elections. But, it does not worry me. The main concern is something that is significant and important for the country, that does not become an issue in an election.

That is unfortunately what happened to us when we unleashed the reforms proces. What we needed to do was post-election salesmanship of reforms. To that extent the Indian middle class was and is in a sense the immediate and direct beneficiary of reforms. It got an opportunity to grow that it strived for long. Whether it was bringing down tariff barriers or government retreating from areas of enterprise permitting private sector to move in or getting public private partnership (PPP), it all mainstreamed the middle class and helped increase the per capita income while improving the lifestyles. It is the same middle class that has continuously acknowledged the contribution made by UPA 1 and 2 and accorded the opportunity to us to serve the country better.

India has come a long way from situation of abject poverty, hunger and malnutrition. Whether one calls it a trickle down effect of yesteryears or bottoms up approach adopted recently, the number of people who have moved up the poverty line during last twenty years far exceeds the number of people who moved up during first forty years of independence. Reflect for a moment as to why did we switch from Congress ka haath garib aadmi ke saath to Congress ka haath aam aadmi ke saath. Today’s middle class is brimming with vitality and would not appreciate being described as garib. Simultaneously, the garib, the poor and disadvantaged will also not feel dignified by being addressed as garib. There has to be a sense of being common between the middle class and people below poverty line as these two form the largest chunk of our populace. This is where we propounded the idea of aam aadmi and focused on inclusive growth that commonly distributes the gains of economic well being to all.

Next two years are crucial for the nation. During the last economic crisis few years ago, India remained insulated and it kind of bypassed us. It may not be so in future

We have also used the opportunity of growth to expand the social safety net and to provide for an elaborate framework. Leakages, slippages and irregularities are a reality – but we have to shield ourselves against these ills in the system. The UID will be the greatest binder for our citizens. Our strength is our people and we have to nurture our strength. We are aware of our demographic dividend and are committed to harnessing it, knowing fully well that the time is short.

Next two years are crucial for the nation. During the last economic crisis few years ago, India remained insulated and it kind of bypassed us. It may not be so in future. The world is watching us as one of those economies that has strong fundamentals, financial institutions, banking system and broad parameters of trade. We are running out of time for tax legislation and financial sector reforms. India enjoys a place of pride amongst ecomomic giants across the globe. If Gandhi and Nehru are remembered as part of India’s freedom struggle, aam aadmi of today will be remembered as part of freedom movement of India’s new economy. Its time we acted.