Odisha had for long suffered the humiliation of being showcased as one of the poorest in the country. But today it has taken the centerstage in leading the nation by example, be it being the first city in the country to achieve clean drinking water from tap in the city of Puri or achieving hundred percent vaccination coverage against Covid-19 in Bhubaneshwar. Needless to mention, it won fullsome praise for its astute handling of both the first and the second waves of the Covid 19 by the internationally acclaimed Lancet journal. Adding to these champion acts, it recently garnered nationwide appreciation for sponsoring the Indian men and women hockey teams whose sterling performances at the Tokyo Olympics 2021 made every Indian proud. It is the first state in the country that has officially sponsored a game/ sport since 2018. What is even more laudable is the fact that when the national government or big corporates failed to sponsor them, Naveen Patnaik, heading a state government, stepped in. It was an eye-opener as to what genuine commitment and dedication can do to Indian sports. 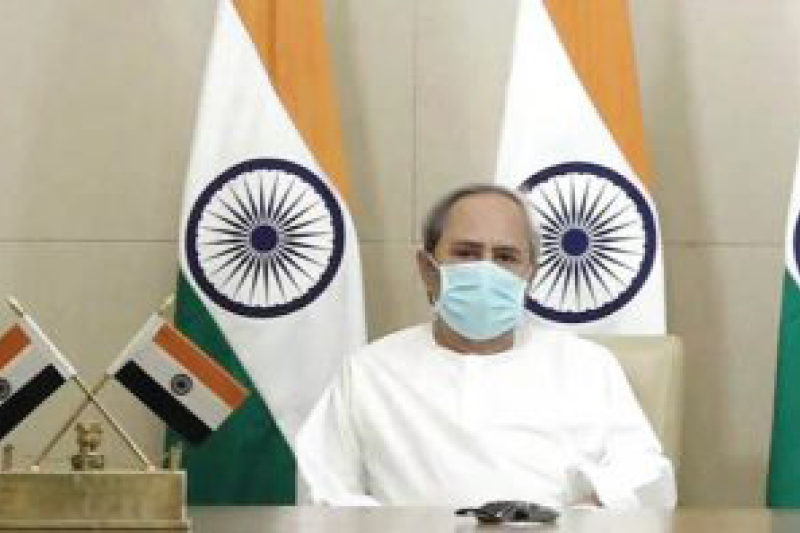 Odisha had for long suffered the humiliation of being showcased as one of the poorest in the country. But today it has taken the centerstage in leading the nation by example, be it being the first city in the country to achieve clean drinking water from tap in the city of Puri or achieving hundred percent vaccination coverage against Covid-19 in Bhubaneshwar. Needless to mention, it won fullsome praise for its astute handling of both the first and the second waves of the Covid 19 by the internationally acclaimed Lancet journal. Adding to these champion acts, it recently garnered nationwide appreciation for sponsoring the Indian men and women hockey teams whose sterling performances at the Tokyo Olympics 2021 made every Indian proud. It is the first state in the country that has officially sponsored a game/ sport since 2018. What is even more laudable is the fact that when the national government or big corporates failed to sponsor them, Naveen Patnaik, heading a state government, stepped in. It was an eye-opener as to what genuine commitment and dedication can do to Indian sports.

The Naveen Patnaik led government came to power in the state in 2000 post the devastating super-cyclone of 1999 which had ravaged the entire State. The newly elected government rose to the occasion and thus began the transformation of the State from being referred to as the ‘disaster capital’ of the country to getting two coastal villages as being ‘Tsunami Ready’ from the UNESCO Intergovernmental Oceanographic Commission, making India the first country in the Indian Ocean region to demonstrate such high levels of disaster preparedness at the community level. Today, Odisha, a state which has faced more than two dozen severe natural disasters during the last two decades, is known as the leader in natural disaster management by virtue of its immaculate preparedness, mitigation and reconstruction measures. It has also been applauded by the United Nations year after year for “strengthening disaster risk governance, investing in preparedness and scenario planning while spreading greater understanding of disaster risk.” In 2018, Odisha became the first state in India to set up the sophisticated Early Warning Disaster Dispose System.

“If you love your people, you don’t fight for elections, you fight for change and transformation. If you work for the people, you will continue to live in the hearts of people like Mahatma Gandhi and Biju Babu. If you keep people at the forefront, it is not a political journey, it is a spiritual experience.”

The Mission Shakti movement of Odisha, launched in 2001 involving seven million rural women has been organized into a formidable network of about six lakh women Self Help Groups (SHGs) who are provided financial assistance through soft bank loans to encourage them to take up various self-employment works and micro-projects. Since 2019, Odisha has promised to dedicate Rs 5000 crore of market linkage to SHGs in the coming five years through government procurement systems such as PDS, mid-day meals and other nutrition support programmes besides medical supplies and infrastructure maintenance works. Women from these self-help groups also led from the front in Covid management and food distribution during the pandemic. Naveen Patnaik has vehemently fought for political representation to women by lending his might to the issue of women reservation time and again besides taking the first step in nominating one-third women candidates in the last parliamentary elections.

Food for all & Poverty Reduction

The State has been successful in dropping its poverty levels by 25% over the past 20 years ever since Naveen Patnaik came into power. The State enacted the State Food Security Scheme (SFSS) to cover more than 34 lakh people left out from the central National Food Security Act (NFSA) which covered only 70% of the State’s 2011 census population, thus covering more than 90% of the households in a food safety-net.

The State has several schemes in place for the upliftment of its farmers. While prioritizing the small and marginal farmers, the KALIA Scheme, though introduced earlier than the PMKISAN Nidhi scheme, went one step better to ensure income and livelihood support to agriculture landless households, agricultural labourers, share-croppers and the elderly who cannot till their lands anymore. The State also provides loans to its landless farmers via a new institutional mechanism of joint liability groups (JLG). For its total food grain production, Odisha has bagged the nationallyacclaimed Krishi Karman Award 5 times indicating the significant outcome of growth in its agriculture sector.

Health for All in True Sense

The State depicted true commitment of CM’s ‘every life is important’ promise in the tactful handling of both the waves of the Covid-19 pandemic by deft execution of micro-containment and limited lockdown strategies coupled with erection of temporary medical facilities at Gram panchayat level with delegation of Collector’s power to Sarpanches, etc. Odisha’s prodigious commitment towards health assurance and equity is also reflected in the Biju Swasthya Kalyan Yojana (BSKY) first introduced in 2018 and now strengthened and its ambit widened to provide a smart Health Card to more than 90% of all households of the State which is 30% more than the PM-JAY. Odisha is the only state in the country to implement such a universal assurance-based health scheme which guaranteed free healthcare services (both outdoor and in-patient facilities) to all, at all public health institutions, irrespective of their income, status or residence and even in empaneled private hospitals. The annual cashless coverage of Rs 5 lakh per family and Rs 10 lakh per woman is a big step forward to bridging the existing health inequities in gender and economically weaker sections and way better than the central counterpart where the bulk of the financial benefit accrues to the insurance companies.

Odisha has begun work towards transformation of existing High Schools by introduction of SMART classrooms, advanced learning aid, laboratories, and revamped teachers’ training programmes. Another effort towards holistic development of schools and colleges is the launch of the Mo School and Mo College Abhiyaan, whereby alumni are being encouraged to have a fair say in the infrastructure and extra-curricular development of their alma mater. Under this, the government has committed to contribute double the amount contributed by the alumni. Odisha Adarsh Vidyalaya, the brainchild of Naveen Patnaik, is another initiative to ensure access to quality education to everyone in the state, particularly the poor and remotely located.

Odisha is also aiming towards making the state a haven for safe investments. In a major boost to the state’s flagship “Make-in- Odisha,” since November 2017, 195 industrial projects ranging across metal, renewable energy, textiles and food processing sectors etc. with an investment value of Rs 92,460.84 crore have been inaugurated. More than 60% of projects under Make-in- Odisha are in various stages of implementation. With growth enabled by these projects, Odisha is emerging as the manufacturing hub of Eastern India. This has created more avenues for jobs.

“Empowerment of women is the empowerment of nation. No household, no society, no state, no country has ever moved forward without empowering its women.”

Odisha is also a pioneer in urban governance. This is reflected in innovative and revolutionary schemes such as Jaga Mission. In a first in the country, this mission is aimed at giving property rights to slum-dwellers as a first step towards improving their living conditions. So far, it has benefitted 1.8 million people living in 3000 slums. For its outstanding performance under this scheme, the state won United Nations’ World Habitat Award 2019. State’s achievement in urban governance is also visible in other areas such as the unique community-based solid waste management, a model urban wage employment programme now adopted by the Centre, water management, affordable housing, etc. Odisha won the fastest moving State in the Swachh Survekshan Awards 2020. In the latest India Smart City awards, Bhubaneshwar won two awards for its innovation in governance and citizen centric projects.

The economy of Odisha has registered tremendous growth trajectory since the year 2000. The average rate of growth in Odisha has been 7.5% which is higher than the national GDP average since 2012-13. In addition to that, the State has successfully maintained revenue surplus since 2015-16. Per Capita income of Odisha increased by 115.60% as compared to national per capita income which increased by 111.51% from 2011-12 to 2019- 20 (RE).

How did Odisha Achieve this Feat?

The Naveen Patnaik led government ensured that the basic needs of its people were catered through a plethora of socio-economic welfare schemes which led to enhancement of their capabilities that went on to instill the desire of moving up the Maslow’s ‘hierarchy of needs’ ladder and thereby looking for newer opportunities. Odisha’s style of governance is also driven by John Rawls’s idea of justice wherein the state institutions ensure fair opportunity irrespective of social classes. Moreover, the policies are aligned to ensure maximum benefit of the marginalized groups based on the ‘Empowerment Model’. As Prof Amartya Sen would say that growth happens when the capabilities of people are enhanced. The focus on achieving higher order aspirations is slowly but certainly leading to unleashing the true potential of the state and its people.

Governance in Odisha has been characterized by an extremely innovative 5T framework which includes technological leveraging, transparency in governance, teamwork from the various stakeholders involved and meeting targets in a time-bound manner thereby leading to transformation. This nuanced approach of the Naveen Patnaik led government is the reason for the various accolades that the State so far has achieved. Corruption has also been specifically targeted under his governance with the mandated disclosure of assets right from the lowest officer in the government hierarchy to the Chief Minister himself.

Once a beleaguered backward State, Odisha now boasts of effective governance in partnership with Panchayati Raj Institutions and communitybased response strategies, the latter being the hallmark of an inclusive growth model underway in the state. While rising to the highest tradition of cooperative federalism by supplying 19,000 MT of the much sought-after liquid oxygen to 19 states of the country during the second wave of the pandemic, there is little doubt that Naveen Patnaik will be long acknowledged as the premier leader in the making of modern Odisha even by his most vehement critics. India must learn from Odisha how to make the most of its available resources and dare to achieve the impossible. As the CM himself says, “speak less, work more.”