The annual SKOCH State of Governance ranking and report is one of the most awaited and discussed publications on the state of governance in the country. The report has highlighted good governance practices for several years. It is based on the study and evaluation of programmes and projects at different levels of governance, and is… 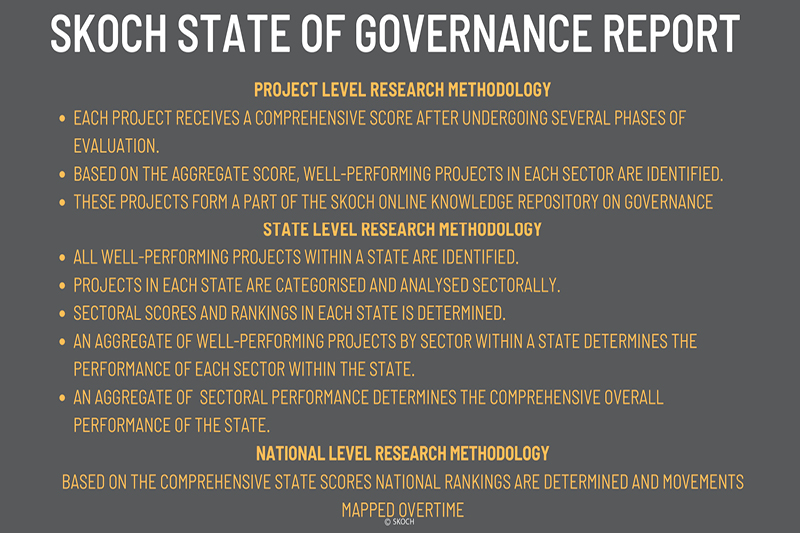 The annual SKOCH State of Governance ranking and report is one of the most awaited and discussed publications on the state of governance in the country. The report has highlighted good governance practices for several years. It is based on the study and evaluation of programmes and projects at different levels of governance, and is derived from an outcome-based analysis of shortlisted projects and programmes from across India. These projects and programmes are evaluated, and a final ranking is given to a state based on cumulative improvements in its governance initiatives.

Lockdowns and restrictions on movement and interaction have made this year’s report among the most challenging to produce. The year 2020 will go down in the annals of modern history as a catastrophically unique one. The COVID-19 pandemic caused a global health crisis, the scale and impact of which on human life was unprecedented.

However, in times of crisis good governance matters more than ever, and governance arrangements and practices played critical roles in shaping responses to the pandemic.  Several innovative governance approaches and practices were undertaken during the year . This was important not just from the perspective of handling and controlling the pandemic, but also in ensuring the continuation of all essential public services.

In a policy brief titled ‘Governance & Institutions COVID-19 Response Resources’, the World Bank said: “The pandemic has exposed the benefits of a stronger, flexible and more responsive civil service, which can incorporate risk management and has access to contingencies in an emergency. It has also stressed the need for sound procurement policies, systems and processes. Helping countries procure lifesaving goods and services on an emergency basis is critical to blunt the impact of COVID-19.”

In keeping with the popular saying “necessity is the mother of invention”, our most striking discovery this year has been that the pace of innovative governance practices increased, despite the constraints and challenges posed by the pandemic. There has been an acceleration in the pace of digital transformation. Even stakeholders, who were previously reluctant to see innovative digital processes replace more familiar and conventional methods of governance, came on board due to the constraints created by the pandemic.

A new champion emerged this year: Andhra Pradesh acquired the top spot, a phenomenal improvement from its earlier rank at number four in 2019. Besides acquiring the numero uno position in overall ranking, Andhra Pradesh also topped three sectoral rankings – Municipal Sanitation, Police & Safety and Rural Development. Gujarat has performed consistently well in the SKOCH State of Governance ranking, and continued to do so: it topped the   chart in 2019, and secured the second position in 2020. West Bengal maintained its position at the third spot for the second consecutive year, after topping the chart in 2018. Tamil Nadu climbed one notch to reach fourth spot from the previous year’s rank at the fifth position. Madhya Pradesh acquired the fifth spot followed by Uttar Pradesh at the sixth, Maharashtra at the seventh and Odisha at the eighth.

The rank is calculated in a scientific manner, based on the performance of its projects. Each project is given a weight, which is derived from the outcome and impact that it has had on its targeted beneficiaries. While overall impact is measured for new projects, the ongoing projects are measured on incremental improvements and changes brought about. The overall rank is the function of the number of projects and outcome weightage of each project. Thus, the ranking of a state could be higher even with if a lower number of its projects are selected for evaluation – as was indeed the case with West Bengal this year.

All States and government agencies are free to nominate an unrestricted number of high-performing projects and programmes for the assessment. Project leaders, champions and architects responsible for the rollout and implementation of the shortlisted projects are called for presentations and further evaluation. Domain experts study and evaluate each project. Extensive field research is also done to evaluate the impact of some of the projects at the grassroots level.

This year, the highest number of shortlisted projects were from Andhra Pradesh: a total of 123 were shortlisted from the state for further evaluation. From these, 37 were judged as highly impactful, and these went through further evaluation. Their outcome and replicability were analysed through grassroots level impact assessment done by domain experts. The gross outcome weightage of 123 projects from Andhra Pradesh finally stood at 66.15, and was the highest among all the states.

What Makes The SKOCH State of Governance Ranking Different

The SKOCH State of Governance ranking is unique because it is scientifically done. Assessment is based on primary data and studies. Each project is assessed and evaluated for its impact at the grassroots level. The weightage of each project is determined by the findings of a grassroots level analysis, and is evaluated on the basis of its outcomes.

There are several studies and reports on the state of governance in the country, but most of these are based on secondary data and government reports. The rankings and awards of these studies are usually decided by “celebrity juries”, which do not put in the time required for a proper study of projects.

The SKOCH rankings are decided by expertise-driven juries, with decades of experience and domain expertise behind them. Jury members are not selected only for the prestige of their names, as happens in most other awards and rankings. SKOCH juries give their decision only after a thorough study and analysis of the projects. They sit through presentations and spend hours in study and analysis. Moreover, each project is analysed and studied by two to three different juries, to ensure an entirely fair assessment.

The shortlisting of the project is done based on detailed project submissions from respective departments/organisations, and desktop analysis. Concerned officials and ‘owners’ of shortlisted projects are asked to make their presentation before expert juries and representatives of competing projects.

Reviews from peers and external domain experts form another important stage of evaluation. Peers, who have implemented similar projects in different parts of the country, sit through the presentations, analyse the projects and give their opinion. These views are included in the final ranking. The views of cross-functional external domain experts from across the country are also taken.

An outcome ranking from project beneficiaries is a crucial element in the  evaluation of projects. The views of beneficiaries who have first-hand felt outcomes and seen changes are recorded.

Each stage of evaluation has a rating, and each rating has a different weightage.

The SKOCH ranking is apolitical, and is done purely for the purpose of academic research. It is the most thoroughly scientific study of governance projects in the country. Its strict process of evaluation ensures that no individual or organisation can unfairly affect the ranking.  This makes it one of the most awaited and discussed publications on the state of governance in the country. The political leadership and bureaucracy of the country both keenly follow the SKOCH ranking. Based on the SKOCH rankings of their respective departments and states, they then develop further strategies for their governance initiatives.

The importance to the SKOCH ranking is such that most states appoint dedicated nodal officers to coordinate their project submissions, and monitor presentation and performance. SKOCH rankings and reports have led to healthy competition among departments and also among the states to bring more transparency and efficiency in governance through innovation and use of new technologies and processes.

SKOCH reports have become referrable knowledge repositories, and their entire process is available online, with projects accessible in digital format. The reports are rich sources of information for researchers, and also for organisations and departments that are willing to replicate projects. The SKOCH platform has been instrumental in the replication and scaling up of several good governance projects.

The SKOCH Group’s endeavour has been to highlight best practices from across the country. There have been impressive good governance initiatives overall, but while in some states they are extensively implemented across government departments and organisations, in others they have been limited to a few departments. For better understanding, the states have been classified in three groups: The states in which projects have performed the best in terms of rankings across different parameters have been classified as “STARS”. States that have done commendable work are next in the rankings, and classified as “PERFORMERS”. The remaining states are classified as “CATCHING-UP”.