Rajasthan leads the way in e-Governance

Rajasthan once part of BIMARU states is now leading the Digital India initiatives from the front. The state has emerged a ‘Star’ performer on a wide ranging e-Governance initiatives. 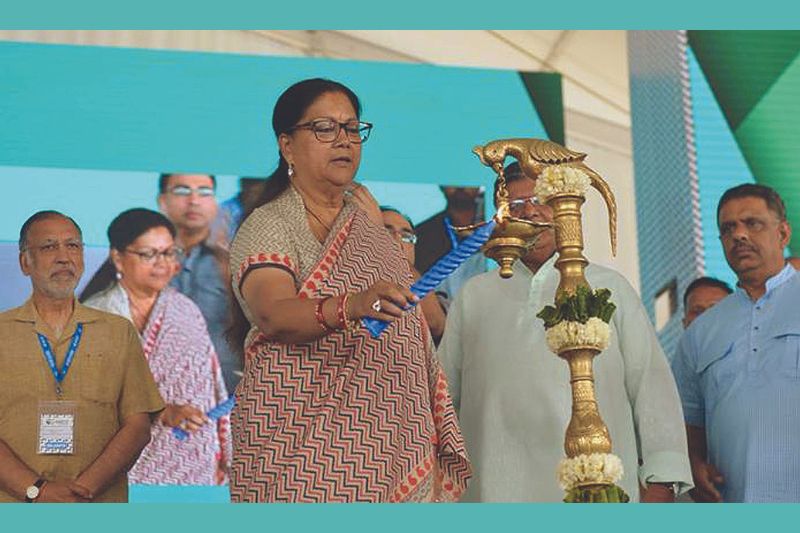 For any state to outshine and outperform others in all the sectors and prove that its governance is exemplary and futuristic is a herculean task but to ensure that it does not lose its sheen or momentum year after year is an incredibly mammoth feat to accomplish. So after last year when Rajasthan topped the SKOCH State of Governance 2017 all eyes were on the “Registaan” that had turned around and transformed itself into “Digistaan”. The state had topped the state list in 2017 and it especially was a huge victory because its rise up the ladder was from a dismal 14th the year before in 2016.

The state could not repeat its performance this year, but after a detailed study of a lot of schemes initiated in the state, SKOCH concluded that the state might have been eroded of its top position, but a number of its schemes, especially in the digital sector, were still great performers. Rajasthan has clearly not lost the game yet.

Last year, Rajasthan had impressed the country with its various schemes that resonated with the idea of digital India and the state had set an example of how can e-Governance become all inclusive and rope in all the other sectors for their optimum performance. The schemes read well on paper and when implemented, they had both the feasibility and the futuristic approach this country is striving for. Chief Minister Vasundhara Raje has chalked out a clear roadmap to ensure that Rajasthan effectively uses information technology to make governance better and people friendly. It is this dedicated and clear vision that has helped the state retain its top position in e-Governance among all states even this year. The sector was at 12th position in 2016 but with Raje steering the wheels towards digital development, the state became the star performer in 2017 and once again become the topper this year. Education too witnessed improvement and climbed to number four from seventh last year. Sectors like sanitation and energy also showed improvement this year. However, Health and Women & Child Development were among the sectors that showed a declined performance.

As part of the State of Governance study, SKOCH sent request letters and also contacted through different channels like telephones and emails to all ministries, departments, municipalities, district administration and other government bodies for sharing project details and their achievements. There was overwhelming response from across the government departments and organisations of Rajasthan. A total number of 40 projects were shortlisted from Rajasthan for further assessment and evaluation. All of these projects were thoroughly studied and examined by domain experts. Based on the detailed study of these projects,Rajasthan was ranked fourth in the SKOCH State of Governance 2018 ranking.

Here is a detailed report of all these projects that SKOCH found to be promising and noteworthy.

Department of Information Technology initiated a few very innovative schemes that were a perfect amalgamation of IT solutions to problems and roadblocks in traditional sectors. SKOCH has narrowed down on these six schemes that were undertaken by the different departments of the State Government.

Bhamashah Swasthya Beema Yojna was initiated by the State Government in December 2015 in the healthcare department. It is a health insurance scheme that aims at providing hasslefree cashless treatment to all the families covered under the RSBY (Rashtriya Swasthya Bima Yojana) and NFSA (National Food Security Act).

The scheme aimed at rural regions encourages the private sector to start providing hospitalisation services whilst lowering the rising concerns on government facilities. The implementation of the scheme is done through Bhamashah Cards. Claims worth more than S1,200 crore have so far been claimed till now.

Another scheme that has caught everyone’s eyes is the Fraud Detection Framework by the Department of Information Technology & Communication, Government of Rajasthan. The project, which has been operational since 2015, focuses mainly on increasing the state revenue by detecting potential revenue leakages, identifying fraudulent activities and improvement in compliance through analytics based methods. This has driven the department to implement analytics as a process to increase efficiency, effectiveness and resource potential of key state government departments using advanced analytical software tools.

The scheme has enabled the government to track, monitor, identify and penalise individuals involved in fraudulent cases tactically bypassing rules of departments. Automated systems provide minimum human effort realisation of big chunks of revenue for the government that was unidentifiable before this project. The scheme has, thus, increased the state revenue by detection of potential revenue leakages and shown marked improvement in compliance through analytics based methods.

The scheme initiated in 2015 has undergone a lot of changes and effective upgrades that make it much more powerful a tool in the field of e-Governance. Working towards the dream of going paperless in a few years, this digital document manager is a portal for providing digital verification platform for official certificates and documents.

Raj e-Vault provides all the users a platform where anyone can upload any document and access it from anywhere by logging in to his e-Vault account. Anyone with a valid Aadhaar Card can sign up on Raj e-Vault. Another important feature offered by the portal is that the documents can be e-signed. The portal has become the most convenient way for anyone to verify their own documents digitally.

Rajasthan Solar Energy Policy, 2014 has catalysed the development of 5410 MW of solar parks and 650 MW of nonpark solar projects in the desert region of Rajasthan, with an investment of approximately S30,000 crore. The solar policy ushers in an environment that is congenial for investors and also would drive further investments in the state in the area of clean energy. Lesser dependence on fossil fuels, with an approximate reduction of 8.5 Million Tons/Year of CO2 emission, assists in addressing environmental concerns and is an important step in mitigating the deleterious effects of climate change.

Through the right policy and coordinated action, Rajasthan has been able to achieve the lowest solar tariff of S2.44/kWh in India in the Solar Park and the state envisions to create green Rajasthan with capacity to produce 25 GW of solar energy, supporting the national goal of 100 GW solar by 2022.

Rajasthan government has flagged off the Mukhya Mantri Vidyut Sudhar Abhiyan Yojna to provide 24X7 uninterrupted and quality power supply to the state, improve consumer services, electrical safety, reduction in AT&C losses among others. There are monitoring agencies from the Chief Minister level to the Block level thus giving accountability to departments concerned in times of crisis. To ensure reduction in AT&T losses in the rural areas, there is a feeder in-charge for each feeder and there are technical interventions on each feeder. Similar stringent measures have been placed in the urban and industrial areas to meet the targets.

Besides these projects, some other schemes that proved that the vision of the state leadership had embarked well on the journey of Digital Rajasthan-Safer Rajasthan-Happier Rajasthan have been understandably in e-governance. Two other projects, studied by SKOCH that looked innovative and effective are in education and sanitation.

The project ‘e-Mitra’ has been a game changer in the field of service delivery and e-governance and is probably the face of Digital Rajasthan. It is a next-generation self-service interactive kiosk with 17’’ high-definition touch screen that displays Digital Signages to guide you through the process. e-Mitra has access to various services on a single click. One can avail these 400+ services through the kiosks which are fully automated. Also, e-Mitra+ is the first of its own where you can get the printed certificate through these kiosks, making the state a technologically and digitally empowered state.

Raj-eGyan came into being in December 2015 and the portal recently underwent various upgrades and policy changes which has made it much bigger a success than it already was. The portal provides an easy access to ubiquitous, updated and extensive educational support system. It was launched to improve the learning level in schools and animation, video, audio, e-book etc. are being provided to students, mentors, educationists and guardians under the scheme. The “Sab Padhen, Sab Badhen” is the main principle behind this project and the attempt is to ensure the universal availability of every educational content to all the involved stakeholders across the state.

‘Shaala Darpan’ is an integrated bilingual system to capture and regularly update schools, teachers, staff and students’ information of all secondary set up government schools of Rajasthan. The system was launched in February 2016 and through this real-time MIS, now the department has basic and infrastructure details of Government Secondary Schools in Rajasthan alongwith students and staff details. Today, the system has updated information of 45+ lakh students and 1.80+ lakh staff members of 13,680+ schools. Staff data were captured against the sanctioned posts and the staff joining and relieving is made mandatory.

Integrated Health Management System (iHMS) is a comprehensive software solution provided by the Government of Rajasthan and consists of three components – Hospital Management System, Telemedicine and Wellness and Screening – that capture all health related data and events of a person in the form of an Electronic Health Record. This record can be accessed and generated by any individual or hospital by using the individual’s Aadhaar or Bhamashah Card. This system is available to all government hospitals and health centers from Medical College Hospitals & Dental College Hospitals and would also be made available to interested private institutions and research institutions. iHMS replaces all currently running software of the state health departments and the legacy data of these software shall be migrated in the new designed Integrated Health Management System which will cater to all types of requirements of the departments.

Jaipur Nagar Nigam has been undertaking a lot of efforts to segregate the municipal solid waste at source. Uncontrolled disposal of the segregated organic solid waste can contribute to many environmental issues like greenhouse gas emissions, ground water pollution, air pollution and public nuisance. Considering the above mentioned environmental impacts, the ULB has developed a modern scientific processing and disposal facility to treat the segregated municipal solid waste. The treatment facility is a totally covered modern industrial unit which adheres to the requirements of Municipal Solid Waste (Management and Handling) Rules 2016.

With the objective to take dental healthcare to the doorstep of the children in rural areas, particularly underserved regions, Mobile Dental Van under Rashtriya Bal Swasthya Karyakram (RBSK) was launched in 2017. It covers all the 34 districts in the state. More than 40,000 children have benefitted from the service. Nearly 33,000 dental procedures have been carried out.

The state, under the leadership of Vasundhara Raje, has shown significant improvement in its developmental path. Raj and her team have relentlessly worked towards making the state digital and modern in all sectors but while the e-Governance is the high point of this governance, the state has to ensure that the gap between the modern and the traditional is minimal for the all-inclusive growth of the state.