Punjab has achieved extraordinary growth in agriculture and has been successful in increasing food grain production in the past. 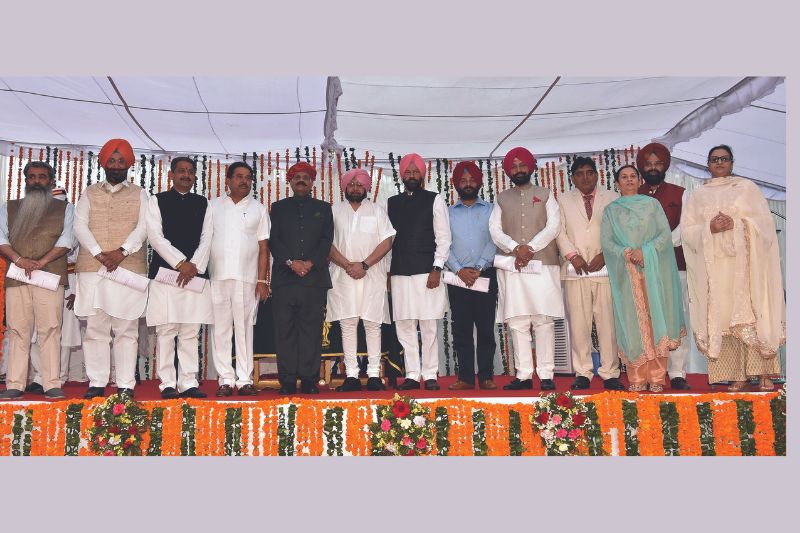 The entire country owes it to the state of Punjab that has played a crucial role in making the country self-sufficient in food production in the past. Besides writing history by being at the forefront of the Green Revolution in the 1960s, Punjab took several impressive steps to make governance efficient and transparent in the last few years. Such was the effect that Punjab climbed many ranks in one year and from being a “Performer” in SKOCH State of Governance 2016, it rose to being a “Star” in 2017. However, things have been on a downslide lately and the decline shows in the ranking at SKOCH ranking this year when the state slipped to 7th position this year from last year’s 5th.

When SKOCH studied the various projects in various sectors that were initiated by the state government of Punjab, it was found that the state has been performing very well in district administration with innovative schemes and policies being implemented. Health and municipal governance too have initiated a few well thought policies in the sectors.

As part of the State of Governance study, SKOCH sent request letters and also contacted through different channels like telephones and emails to all ministries, departments, municipalities, district administration and other government bodies for sharing project details and their achievements. There was good response from district administration, health and municipal governance. Total 25 projects were shortlisted from Punjab assessment and evaluation. All of these projects were thoroughly studied and examined by domain experts.

Here is a detailed analysis of all the significant projects that have catapulted the state’s ranking in individual sectors.

As mentioned earlier, the state has been consistently doing exceptionally well in district administration in the last two years.

District Administrations in Bathinda and Pathankot have worked aggressively to work out a solution for the paddy straw disposal in coordination with Department of Agriculture. Every year, the entire North India chokes and breathes harmful polluted air due to the burning of paddy straw in the fields of Punjab. The state produces about 20-22 million tonnes of paddy straw annually and about 85 to 90 per cent of this is burnt in the fields. Bathinda has 1.52 lakh hectares area under paddy cultivation producing 6 lakh metric ton stubble, which when burnt is a huge problem.

District Administration Bathinda thus resolved to reduce stubble burning by stressing on viable alternative methods and reaching out to the farmers through this campaign. Various techniques have been advocated for the management of paddy straw – direct sowing with happy seeder, use of SMS combine, straw chopper and Straw baler to remove stubble and use it in bio mass plants. However the availability of such equipment is a limiting factor and small farmers could not avail it due to financial constraints. Thus, it was decided to use MGNREGA in order to make compost pits where small and marginal farmers could also store their stubble and convert it to manure rather than burning it.

The administration raised awareness on viable alternative methods and reached out to the farmers and such persistent efforts resulted in 400% improvement in the area managed conservatively (78000 ha) compared to last year (16000 ha).

Similar steps were taken by the district administration Pathankot where farmers were motivated to sell their paddy straw to the dairy farmers of this area as fodder for their animals.

District Administration of Mansa has initiated Project Oasis for solving the multifold problems of soil erosion, water conservation, self-sustainability and employment generation, all under the aegis of one project.

In district Mansa to solve the menace of stray animals Cattle Pound was built. While the stray cattle problem was solved, it led to two other problems. Rain water from the shed went to nearby fields thereby damaging the crops and secondly it was difficult to manage the monthly running cost of the cattle pound. Thus a park was constructed to solve both the problems and people from surrounding villages were also involved in the process.

e-Labour Punjab, initiated by the Department of Labour, is a unified portal helping employers, employees and enforcement agencies to have better coordination among themselves by implementation of various Labour Laws & Rules in the state of Punjab. This web portal has brought transparency in day-to-day operations and is further helping the department in maintaining industrial peace and harmony among workers and employers.

Bathinda Education Network is an innovative step to improve the levels and quality of both primary and secondary education in the district. With the aim of ‘each one, reach one, teach one;’ the Network has brought together the Education Department; B.Ed and other educational institutions and NGOs involved in the areas of education. The short-term aim of the programme has been to conduct remedial classes for Board going students of Class X and XII in staffstarved Government schools, whereas the long-term aim of the project is to conduct bridge class programs, summer camps and evening classes for children who have dropped out of school. While the results of Class X are awaited, the result of Class XII has been incredible with a pass percentage of 77.48 per cent as opposed to 61.99 per cent last year and the District ranking 4th in Punjab.

OOAT Clinics (Outpatient Opioid Assisted Treatment Clinics) have been started by the Health Department of Punjab as pilot phase in three districts in October 2017. This has enabled delivery of substance use disorder treatment facility accessible to significant number of people specially those who are not willing for indoor admission for treatment of drug abuse. Central registry has linked the persons reporting and getting treated in these clinics who after initiation of treatment can take their daily maintenance dose from their nearest community health center which ensures proper follow up of patients also. Trained Staff, assigning UID to avoid duplicity of patients taking dose from more than one place, monitored administration of daily dose are some of the salient features of this project.

Of the total projects that were studied, SKOCH found four projects that have the potential to excel and perform. These projects are in District Administration, Police and Safety, Rural Development and Education.

E-Basta is a framework to make Punjab school Education Board books accessible in digital form as e-books so that they can be read and used on smartphones, tablets and laptops. The main idea is to bring various students and teachers of different schools together on one platform. Besides the portal, a back-end framework to facilitate the organisation and easy management of such resources has also been made, along with the web-based applications that can be installed on tablets for navigating the framework. The framework, implemented as a portal, brings together two categories of stakeholders: the teachers and the student. While the teachers upload the content, the students identify e-content of interest and download the same.

e-District, an e-Governance initiative aims to create a robust Court Management System through digitisation, document management, judicial knowledge management and learning tools. E-District leads to good, corruption-free, foolproof, and efficient, hassle-free system and is a step towards increasing the transparency and accountability.

E-District project focuses on complete backend workflow computerisation of 42 citizen centric services being delivered at 22 District & sub-district level and aims to save time and money of people. In the first phase of the process, vital information pertaining to revenue courts, such as display of the cause lists, hearing dates, other proceedings and final judgments pronounced by the court could be viewed online. The portal will facilitate e-filing, generating notices to the appellants and respondents, interim orders and adjournments, generation of the cause lists, case status and final judgment of the cases. The system will also send SMS alerts to the stakeholders about the case status as well as the next hearing dates.

Panchayat Land Auction is an Android Mobile App. It can be easily accessed by the General public or an official person through Google Play Store anytime and anywhere. It allows registration of bidders through the App and it can be done anytime and anywhere. A bidder can search for a plot by applying filters on the various parameters such as area and price through this App. There is also a provision for the Panchayat Secretary to upload the photograph, bid sheet and name of the successful bidder through this App.

Punjab has become the first state in India to launch a technological based mobile phone oriented face recognition software.

In view of the rising crime graph and with a purpose to curb the activities of the criminals in Punjab, the PAIS (Punjab Artificial Intelligence System) has been efficiently implemented to digitally collect and maintain the data of all the criminals lodged inside various jails of Punjab.

Under PAIS, the data of criminals from all the 23 jails of Punjab has been collected and put into the software. The working mechanism of the PAIS is simple to understand and implement; it involves clicking of close-up angle photographs of a given criminal and then uploading them on PAIS with a unique criminal ID which also contains information like the criminals Name, Father’s Name, Mother’s Name, Date of birth, Address, the details of FIR’s registered against the criminals his/her home district etc.

The PAIS has proved to be very successful in helping the police officers to effectively trace, identity and arrest criminals in various cases, as the criminals have been carefully divided into various categories like gangsters, terrorist, drug dealers, etc. The PAIS has digitalised all the records of the criminals, which, in them has enhanced its capacity in terms of safety, time and manpower.

As mentioned earlier, the state has been declining at a rapid rate. Punjab has a vast unexploited potential of growth, but it needs a balanced approach. It started with agriculture and overlooked other sectors. Now all out efforts are being made on roads, bridges and bypasses. There is need to improve governance, encourage the industrial sector and improve the education system to put the state on the right path again.

The Green Revolution has turned almost pale, with no potential technology in sight. After attaining exemplary progress till the end of the last century, the growth rate in the agricultural sector in Punjab declined to 1.7 per cent in the Twelfth Five Year Plan period compared to 3.5 per cent of the national growth rate. The employment opportunities, in the traditional set up, are limited and there are constraints.

With limited scope for major spike in funds to build capital assets, the present state government has sought prudent expenditure by allocating funds for basic infrastructure including piped water for every household, refinery, toilets, class rooms and schools. The government announced an allocation of S100 crore for stubble management and S750 crore to upgrade agricultural markets to boost marketing of commodities for 2018-19. Better all-inclusive development, more employment opportunities among rural youth, better placed agricultural modifications are a few steps that the new policies need to focus on if the government wants Punjab to be a driver in the country’s growth in the long run.