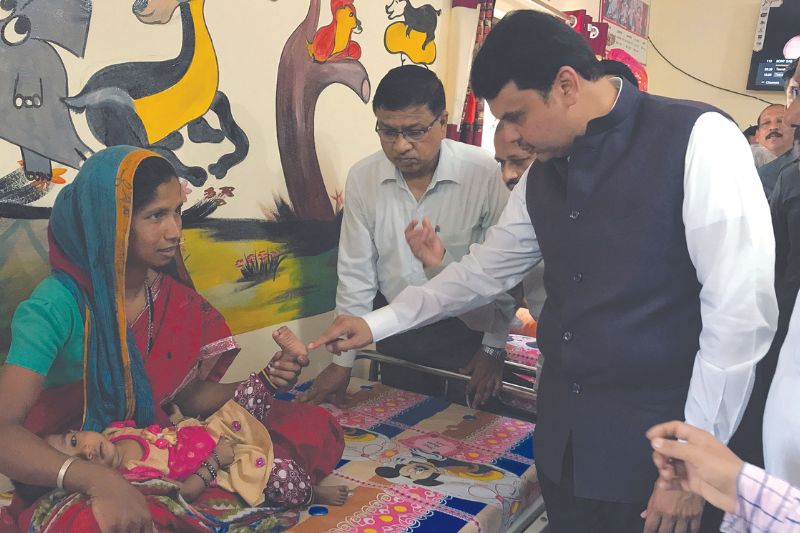 As part of the State of Governance study, SKOCH sent request letters and also contacted through different channels like telephones and emails to all ministries, departments, municipalities, district administration and other government bodies for sharing project details and their achievements. There was good response from across the government departments and organisations of Maharashtra. 32 projects were shortlisted for assessment and evaluation. All of these projects were thoroughly studied and examined by domain experts. Commendable projects were seen from different segments like Women & Child Development, Food & Civil Supplies and Municipal Governance.

In order to ensure timely and accurate honorarium payment to Anganwadi sevikaand helpers, the Women and Child Development Department of Maharashtra has decided to automate the process of payment and a web-based and cloud support scalable application has been developed. The system manages honorarium processing smoothly and without errors, thereby eliminating risks related to manual processing. It is based on G2G service platform. The application has been developed to address the following:

Pune is amongst the few cities in the world to acquire for itself several noteworthy accolades like Oxford of the East, Start-Up City, Manufacturing Hub, Queen of Deccan, Pensioners Paradise and Cultural Capital of Maharashtra. Building on these strengths, Pune now aims to transform itself into the most liveable city in India under the framework provided by the Smart Cities Mission envisioned by the Prime Minister of India. Pune’s rapid geographic and demographic growth entails a big spike in the demand for water. In order to future-proof the city from a potential situation of water crisis, Pune Municipal Corporation (PMC) has conceived the ambitious and futuristic 24×7 water project. The main objectives of this project are providing safe and equitable water supply to all citizens for the next 30 years, distribution of water 24 hours every day, reducing the amounts of water losses and nonrevenue water and ensuring technological, economical and environmental sustainability of the water supply service.

In addition to the water project, PMC has undertaken important interventions aimed at increasing the supply & availability of potable water. The Corporation has supported the above mentioned infrastructure initiatives with an elaborate techno-financial-legal policy framework. It has unanimously adopted several progressive and citizen-centric guidelines and policies on adherence to service level benchmarks, stakeholder consultations, telescopic water tariffs and project-financing and debt servicing. One example of such progressive policies is the issue of PMCs municipal bonds to finance the above mentioned project. PMC’s 24×7 Water Project also provides the city a golden opportunity to put in place reliable, affordable and safe highspeed optic fiber cables along with the underground pipe-network. This novel utility service has the potential of becoming a robust and reliable revenue stream for PMC as the city leapfrogs into the digital age.

Pune is poised to add a new chapter in the country’s urban transformation saga based on Prime Minister’s vision of financially empowering urban local bodies. Pune launched India’s largest Municipal Bonds programme (s2,264 crore) on 22 June 2017 at the Bombay Stock Exchange, Mumbai. This is also the first issuance since the publication of Issue and Listing of Debt Securities by Municipalities Regulations, 2015 by Securities and Exchange Board of India (SEBI).

Recognising the fact that Municipal Bonds can be a useful tool to meet the city’s growing infrastructure-financing needs, Pune Municipal Corporation has been proactively working with the state government, Union Ministry of Finance (MoF), Union Ministry of Urban Development (MoUD), SEBI, SBI Capital Markets Ltd. (SBI Caps) and advisors from the US Department of Treasurys Office of Technical Assistance (OTA) in developing this new financial-asset-class. PMC proposes to raise bonds amounting to RS200 crore during the first tranche of its 5-year bond programme. PMC’s Standing Committee and General Body have approved a consumption based telescopic water tariff structure for the next 30 years. This policy will progressively increase the revenues generated from the 24×7 Water Project leading it towards selfsustenance. Additionally, as part of the structured escrow payment mechanism, a portion of PMCs Property Tax has also been pledged for the debt servicing of the bond program. As per the financialprudence prevailing at different points in time in the future while simultaneously adhering to the relevant regulatory framework, the bonds may also be partly/fully paid from PMCs several revenue sources.

To improve the life state of women and to empower them with viable livelihood, Nagpur Municipal Corporation formed 10 women selfhelp groups (SHGs) and imparted them with leadership skills training and general capacity building. They further formed area level federations (ALFs), each of 10 SHGs. The women in these groups started making handmade products, but since it was difficult for them to market the products, they were provided with a market outlet. This outlet is at a prime market location and has been made available for the women entrepreneurs at no cost to them. The authorities also provided placements after skills training through an annual job fair.

Before the rollout of the Parivahan application, there were a number of issues and challenges that the Maharashtra Motor Vehicle Department as well as the citizens faced. All applications such as learner’s license, driving license and registration certificates required the citizens to physically visit the Regional Transport Office in their vicinity for their processing. Due to the high volume of footfall in these RTOs, people had to wait for long periods of time to resolve even a minor issue. Also, services such as change of address in driving license (DL), issue of duplicate DL, renewal of DL, additional endorsement to DL, replacement of DL in case of loss or damages and issue and cancellation of NOC were conducted offline, thereby making the RTOs inefficient besides increasing the time a person spent at the RTOs. The offline method of conducting transactions also greatly increased the degree of errors made in these applications. Besides these problems, all fees were collected in paper currency, and each RTO had to do a tally of revenue collected on daily basis. These processes were both timeconsuming and cumbersome. A single application would sometimes take weeks to resolve, causing the citizens to visit the RTO multiple times to follow up on his/her application status. This problem was further heightened by the fact that due to all transactions being conducted offline, there was no proper tracking mechanism in the RTOs.

Following are few of the benefits that have been witnessed due to Parivahan rollout:

Besides the above four projects, one more project that was narrowed down by SKOCH as a project with potential is in the Food and Civil Supplies sector. In its endeavour to drive and facilitate Ease of Doing Business and provide a robust and transparent automated system, referred as Vaidhmapan, the Food, Civil Supplies and Consumer Protection Department has rolledout the extensive and comprehensive end-to-end computerisation system for Legal Metrology Organisation in Maharashtra. Vaidhmapan is one of the integrated service project and one of its kind in G2B initiative implemented in Legal Metrology Department, Government of Maharashtra. It helps in end-to-end solutions aimed at improving G2B services. Increased transparency, time saving and increased eciency are the benets, both consumers and staff of department can derive from Vaidhmapan.

The project is notable in its approach to promote a competitive environment to facilitate accurate measurement, fair trade practices, good business and safeguarding the interests of the licensees such as manufacturers, repairers, dealers as well as the users of the weighing and measuring instruments across all the regions of Maharashtra.

There were a plethora of issues faced by the Women and Child Development Department (WCD) pertaining to more than 1 crore beneficiaries from more than 1 lakh Anganwadi Centres. These included lack of adequate security measures, manual data collection, delays in submission and human errors. To address this, a web-based Line Listing Software to facilitate growth monitoring of all its beneficiaries was launched.

In its endeavour to drive and facilitate ease-of-doing business and provide a robust and transparent automated system, referred as Vaidhmapan, the Food & Civil Supplies and Consumer Protection Department has rolled out an extensive and comprehensive end-to-end computerisation system for Legal Metrology Organisation in the state.

Agriculture is an area that the government of Maharashtra needs to focus on. Crops have been destroyed on a large scale due to unpredictable weather and poor rainfall. The Economic Survey of Maharashtra has projected a negative agriculture growth at 8.3 per cent for financial year 2017-18 on account of decreased production of food-grains, pulses and cotton crops.

Another aspect of the Maximum City is its health that is really critical due to lack of open spaces, greenery, transport facilities and the almost exhausted expansion. The financial capital has lot of pressure, and the government has its hands full due to this aspect. After taking up the agenda of infrastructure so aggressively, the government will now have to deliver through timely execution of projects.