Karnataka: Stays at Number 11, Needs to Gear Up

The state government of Karnataka has been a mixed bag in the last few years. While it has been pushing its own limits and showing excellence in the areas of municipalities, transport and women & child development, a lot of other areas still lack progress. 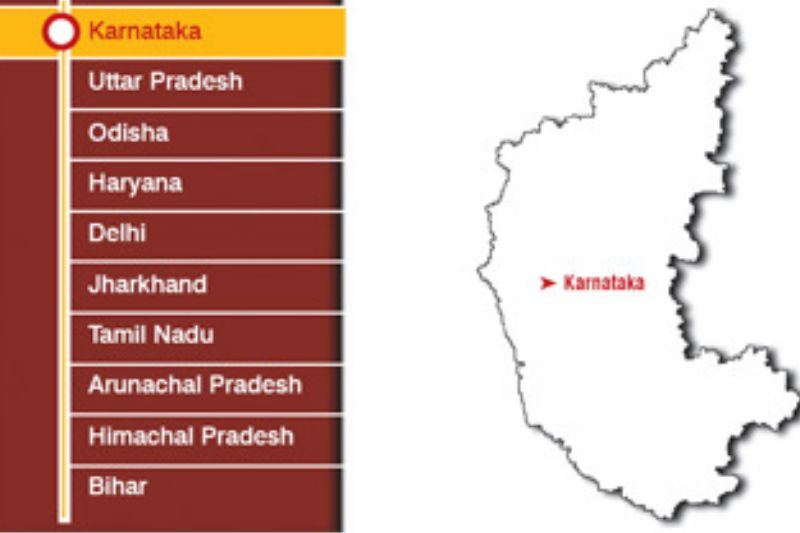 The state government of Karnataka has been a mixed bag in the last few years. While it has been pushing its own limits and showing excellence in the areas of municipalities, transport and women & child development, a lot of other areas still lack progress.

From across the state 22 projects were shortlisted for assessment and evaluation. Majority of the projects came from municipal governance, transport and women and child development. Karnataka has been maintaining its 11th rank for the last three years and has been a “Performer” since 2016. For it to be a “Star” it definitely needs to up its game and broaden its horizon and focus on other sectors too.

When Skoch studied its various projects, it found that two of the projects in irrigation initiated by the State Government were catching up and three other projects in Women & Child Development, Municipal Governance and Skill Development had the potential to excel.

The Kartnataka Government has clearly been brainstorming about farmers’ issues and especially looking for effective ways to curb their water-related problems. Two of their schemes, Krishi Bhagya and Parihara, are aimed in this direction.

Krishi Bhagya is a step forward to help farmers by making dry land farming not only sustainable but also lucrative by harvesting surplus water and using it as a lifesaving resource. The programme which is still under implementation has resulted in construction of 2.15 lakh farm ponds benefitting the critical irrigation needs of 4.56 lakh hectares of area through conservation of excess runoff water and utilising the same during the critical stages of crop production as a life-saving irrigation.

Another impressive scheme by the State Government is called Parihara” web application which enables direct benefit transfer (DBT) of input subsidy through Aadhar Enabled Payment System (AEPS). The application records details of farmers such as survey number, nature of crop and extent of land from Bhoomi database. Parihara has ensured timely disbursement of input subsidy in an efficient and transparent manner to more than 36 lakh farmers during one of the worst drought year 2016-17.

Karnataka government’s few schemes in skill development, WCD and Municipal governance are noteworthy and SKOCH believes that timely execution and scrutiny can definitely make these projects a success in the longer run.

The Department of Women & Child Development has introduced an innovative scheme for the balanced diet of pregnant and lactating women. The scheme called Mathrrupoorna is aimed at providing at least one full hot meal to 8.31 lakh pregnant and lactating women in the state. The other aspects of this scheme are fresh balanced meals for the women, provision of health services, 30 special counseling cycles on antenatal care, sanitation and childhood stimulation.

The meal will meet around 45 per cent of the daily calorie required for the targeted women. Besides, the deparment also arranged for the administration of Iron Folic Acid (IFA), calcium and deworming along with gestational weight monitoring for pregnant women.

In another scheme called “Shilp Gurukul’, the Karnataka State Handicraft Development Corporation Karnataka is functioning with the objective of preserving, developing and promoting traditional handicraft of the state.

Gurukula was established in Shimoga District in 2011. A qualified master craftsman is appointed to impart the training programmes, which include both the theoretical and practical aspects of the craft, to the students of two years full term certificate course. The entire expenditure including the boarding and lodging expenses, stipend to the students, study materials etc are fully borne by the state government.

Another project that has potential has been introduced by the Municipal Governance is called Abhaya- meaning fearless in Kannada. An emergency service by the Mysuru City Corporation, the Abhaya team can be contacted in case of emergency by the Corporation officials as well as the general public. Their duties includes removing water that has entered into low lying houses, cutting uprooted trees that has fallen due to a storm, controlling traffic during main road construction and major events, bringing out offenders of banned plastic sale, shifting goods, removing lm posters as per Prevention of Disgurement Act, Enforcing Cigarettes and Other Tobacco Products Act around educational institutions, clearing footpath vendors for the comfort of pedestrians, also removing banned ex material and enforcing Model Code of Conduct during elections by removing all visible political boards/names in the city.

Karnataka needs to ensure that it shows equal enthusiasm in other sectors namely e-Governance, Police & Safety, Sanitation and Education if it wants the state to witness an all-inclusive growth.