Well-drafted policies have led to social and economic inclusion in Chhattisgarh. The state has given impetus to sanitation and e-Governance. 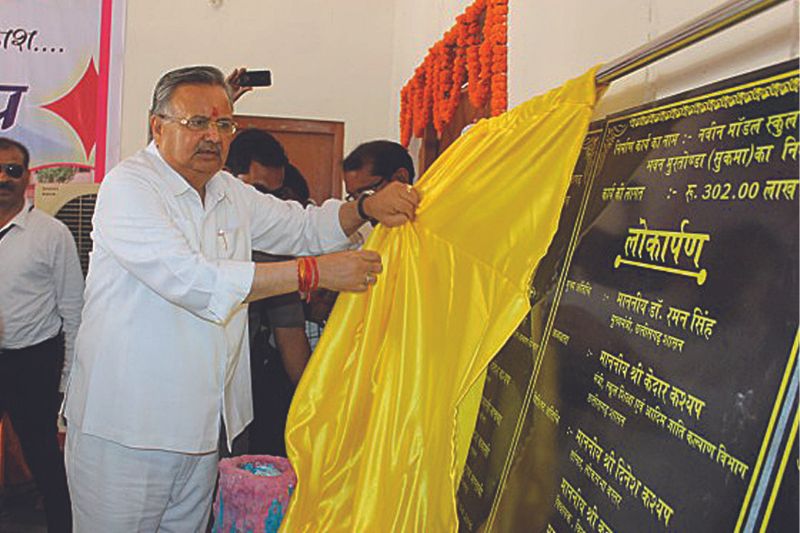 If one could make a bucket list for modern India, one issue that ironically will still hold a major place alongside Digital India is clean India. Swachh Bharat is a dream the entire country is aspiring for. There are various initiatives and awareness campaigns adopted by various states in the direction but not many governments have been able to achieve what they aspire for. One state, however, has risen above all others and shown how very fundamental solutions to the problems of sanitation can bring in the much needed difference.

The state government of Chhattisgarh, with the support of local bodies, has consistently been working in the sanitation sector and been giving an impetus to the nationwide Swachh Bharat Mission in the state. A number of initiatives have been taken to promote urban development and make cities more liveable and sustainable. The state ranked 14th SKOCH State of Governance 2017, but with new and feasible initiatives in practice, the state has risen quite a few notches and has ranked sixth in the overall state ranking this year.

As part of the State of Governance study, SKOCH sent request letters and also contacted through different channels like telephones and emails to all ministries, departments, municipalities, district administration and other government bodies for sharing project details and their achievements. There was overwhelming response from across the government departments and organisations of Chhattisgarh. Total 59 projects were shortlisted for assessment and evaluation from Chhattisgarh. All of these projects were thoroughly studied and examined by domain experts.

Ten of these projects were found to be having the potential and the approach to succeed in their respective sectors. Here is the detailed analysis of all such reports.

When SKOCH studied the various projects in its different sectors, it was found that the state has been aggressively and effectively working in the sanitation sector and has also been yielding positive results too. The basic awareness among public about the mission and the facilities that are available has been lacking in most of the states and Chhattisgarh civic bodies have targeted this problem and taken up the task of generating awareness about Swachh India. From using social media platforms like Facebook and Twitter to register complaints to concocting organic solutions using wet waste collected door-to-door from households, they are doing everything to reach out to the public and make the difference the country so desperately needs.

For the nation to be clean, the cities and the rural areas need to be clean and for these places to be clean, it is important that each individual takes the responsibility and become consciously aware of the duties each one has. With this motto as their core mission, the Municipal Corporation of Bhillai took up the task of Swachh India movement.

To begin with, Bhilai had poor sanitary conditions due to unorganised collection and transportation of Solid Waste Management (SWM). The collection points were not earmarked and waste collection routes were not fixed. Heaps of waste at every corner of the streets was visible and improper waste management was leading to infectious diseases. Bins and metallic containers were in broken or bad condition in many places. Scattered waste caused choking of drains. There were no separate bins for collection of litter.

So, in 2016 Municipal Corporation decided to make the town ‘Dustbin free’ and to transform the dumping spots into parks and urban forests. The civic body decided to initiate waste collection/management and transportation activities to comply with the Municipal Solid Waste Management (SWM) and Handling Rules, 2016.

Municipal Corporation of Bhilai launched two campaigns, Awaaz and Kadam, focused on proper segregation of garbage before disposing them off, and proper cleaning of public places with the active participation of the locals while spreading awareness about the use of Swachhata App.

In Awaaz campaign, to reach out the targeted audiences, the civic body used social media platforms where citizens could directly reach out to the departments concerned with sanitation-related complaints and the department would resolve the issue.

For Kadam campaign, the municipal corporation chose 10-15 young volunteers to spread the Swatchhata awareness regarding Swatch App, where public could submit their complaints draw the authorities’ attention to problem areas. At the governance level, the corporation witnessed the patient involvement of Nagar Nigam employees, engineers, sub engineers, who were watchful about people’s disputes. They elucidated and confronted every complaint by uploading a picture for the same.

For the implementation of Aawaz, the corporation made logos, created engaging creative to interact with the public and the citizens were encouraged to engage through Facebook, twitter and apprise the department of any shortcomings in their area. Further, after receiving queries or complaints, a survey team would locate the complainer to distribute dustbins and further educate them about the proper use of the dustbins.

In the process of preparation of Sudha Sanjivani, one part of jaggery/ brown sugar, three parts of garbage and ten part of water is used. Kawardha district is famous for agriculture of sugarcane and getting jiggery at reasonable rates was not an issue in the district. The garbage used in this preparation is wet waste like vegetable, flowers, and fruit residue. The wet waste is collected from door to door collection which is segregated and used to prepare the organic solution which can easily replace harmful chemicals like acid and chlorine powder. It can be also used for the treatment of skin diseases in human beings and as a hormone enhancer in plants.

Launched and executed by State Urban Development Agency (SUDA) independently across 80 Urban Local Bodies of Chhattisgarh, Cluster Based City Bus Project is a demand-based state-of-the-art centralised intelligent transport system. Before this project came into place, there was no system of public transport in the state to connect cities by road. This project inter connected the cities by road and eased the lives of its citizens.

Besides, now the citizens have a timely and reliable bus service that is managed professionally and has lower financial burden as well.

SKOCH found that a few projects initiated by Chhattisgarh have the potential and a little more finetuning and able execution can take them a long way. Once again, most of these projects are in the field of sanitation. While it is commendable how the state is working hard to ensure cleaner cities, it is time they start focusing on other sectors like health, education and district governance with equal zeal and approach too. The idea of all-inclusive growth is the only way forward and any state can up its performance only if all the sectors are catapulted with better, realistic policies in place.

The Municipal Council of Ahiwara has initiated this innovative water saving project which reuses the wash basin water into flushing of WC. In community toilet, the innovation is used to improve the design and efficiency of conventional flush toilets, which uses 5 gallons of water with each flush. To reduce the obvious waste, wash basin water is stored in the tank as grey water and is used for flushing.

A wash basin is installed at the top of the flush tank capacity (10 litres) in a toilet block and the water from this basin is stored in the tank which is reused for flushing.

Chhattisgarh has effectively worked towards making its cities ‘Open Defecation Free’ and the three municipal corporations that worked relentlessly to achieve this goal are Kunri, Saraipali and Patan.

The municipal bodies in all the three places firstly ensured that individual toilets and community toilets were in place and thus, with proper awareness made the citizens understand the health hazards that are a result of open defecation. The sensitisation and proper solution in place yielded positive results with the three cities becoming Open Defecation Free.

A simple repair can mend a lot of items and bring back their usefulness. With this simple motto as their vision, Municipal Corporation of Ambikapur has introduced a concept called ‘Repair Café’. This café is equipped with trained self-support groups. The café repairs and maintains the rickshaws and e-rickshaws that run the Clean India Mission, repairs garbage clinic tools and machinery and after a door to door collection, the Repair Lab also repairs refused material which could easily be used again after a simple repair.

Coal mining that should be the pride of the state is now spelling disaster for its people. Deforestation is a major consequence of the mining as a result of which various districts in Chhattisgarh are now adversely affected in terms of health and clean air. For example, mining-intensive blocks of District Raigarh are now covered with coal dust and fly ash which have impacted the health and livelihood of the people living there. The mining in the region has resulted in the drastic decline in the growth of mahua flowers and tendupatta (leaves), which are the primary sources of livelihood for most of the villagers in the coal belt of Raigarh district.

It is important that the government balances coal mining benefits with the environmental preservation and the life of the public in the regions.

With majority of the population in rural Chhattisgarh, it is important that the widening urban-rural divide is soon taken care of and the governance gives it the focus and emphasis that the issue deserves.