The socio-economic situation in the country has changed for the better ever since Prime Minister Narendra Modi took charge of India after winning the 2014 elections. The change has also entered the government sector galvanising officials to work towards the betterment of the country.

The successful enrolment of crores of people under the Pradhan Mantri Jan Dhan Yojana (PMJDY), the Prime Minister Jeevan Jyoti Bima Yojana (PMJJBY), the Rashtriya Swasthya Bima Yojana (RSBY) and other programmes in record time, heralded a change in the way things are running in the country.

The enrolment of 15 crore people in the RSBY, which is for the poor, along with the other multi-crore enrolments in people’s welfare programmes via banking and insurance sectors reflects the change. The poor, both urban and rural, have gained under the Modi government. The enrolment mentioned above and that of 7 crore accounts under PMJDY show that the old way of functioning will not do for a developing India and new ways have to be arrived at to expand the path to progress for all.

At one point of time, banking was not as ubiquitous as it is today. People saved money at home and didn’t think of depositing it in banks. But that time has changed with the PMJDY. LIC did a study some 10-years ago in Rajasthan, which found that 15 per cent of LIC customers in the state opened bank accounts only when they had to encash a LIC cheque, which they got after the passing of a near and dear one. That is not the situation any more.

Never before in the history of Independent India has a political leader given such a resounding and mature message of unity with financial inclusion.

The reason for starting the PMJDY and the PMJJBY is that everybody should benefit and nobody should have any bad experience. Every part of this is related to that. If the last person in the country is so secured by providing him or her insurance and banking, we would have done our bit, directly or indirectly, to fulfil the PM’s dream of taking financial inclusion to everyone.

LIC is many things to many people but has touched or influenced their lives in some way or the other. Established as a corporation in 1956, it has provided insurance cover for more than 40 crore people. The success of the LIC itself is proof that the people of India can turn anything into a success with their belief in the organisation and that too without technology in the decade of the 1960s and later.

The LIC has, as of now, approximately 11.5 lakh agents and 1.2 lakh employees across the country. It is the backbone of the financial system since as an organisation it has some Rs 28.5 lakh crore worth assets. Where there are banks, LIC has funded them, similarly, wherever there is talk of infrastructure, LIC has a key role in shepherding it. Every venture has a role for LIC, it could be small and it could be large. Being one of the premier financial institutions in the country, the LIC has a large agenda towards public welfare and has a well-defined role in building infrastructure projects. LIC finances dams, power projects, airports, ports, highways and nearly almost everything else.

Knowing its social responsibility, the LIC had invested in important development projects like the Damodar Valley Corporation, which came up on the river Damodar once called Bengal’s Sorrow since it flooded every year, causing untold misery to the people of the state. The basic mantra of the organisation is that people’s money should be put to use for people’s welfare.

Everyone should join in the PMJJBY so as to draw benefits from the scheme. People may insure their motorcycles worth a few thousands but will not think even for once about having an insurance cover for their lives. This year itself, 56 lakh claims have been settled at some Rs 1,000 crore so far. 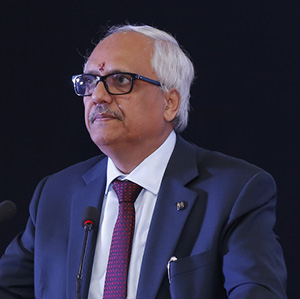 Shri Vijay Kumar Sharma, born on 19th December, 1958 is a post-graduate from Patna University. Shri Sharma joined Life Insurance Corporation of India as Direct Recruit Officer in 1981 and grew up with the Corporation since then. He held various challenging assignments pan India and in all operational streams including in-charge positions at different levels. Working across length and breadth of the country has added immensely to his experience and honed his understanding of demographics of the country, socio-economic needs of different regions and multi-cultural challenges in implementation of Corporate’s objectives.

Economists of Leading Think-Tanks on State of Inclusion