Madhya Pradesh has effectively used Information and Communication Technology (ICT) to reduce red tape, corruption and streamline the process of public service delivery and business engagements. Be it e-Governance, education, health or finance the State has recorded remarkable performance. In every area the focus is on delivering the services electronically. 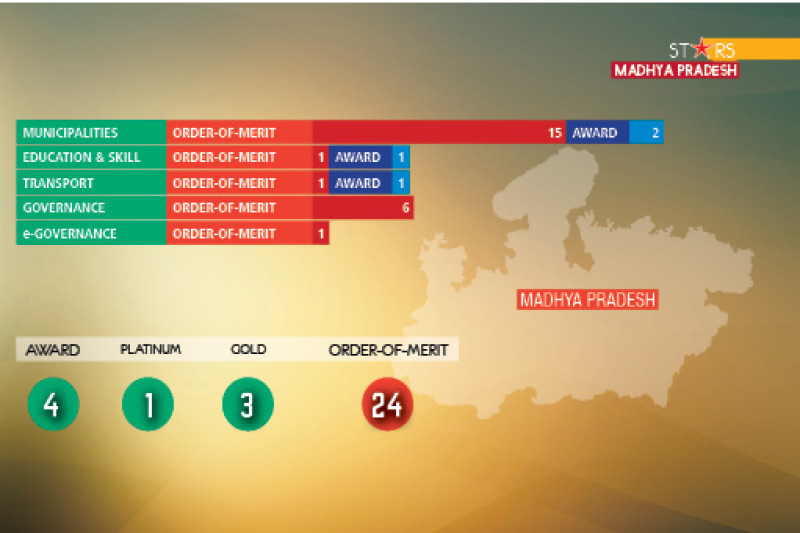 Madhya Pradesh has effectively used Information and Communication Technology (ICT) to reduce red tape, corruption and streamline the process of public service delivery and business engagements. Be it e-Governance, education, health or finance the State has recorded remarkable performance. In every area the focus is on delivering the services electronically. This has made the process transparent and faster. People’s connect is better as the services are provided mostly in the local language – Hindi. Focus on e-Governance has played a crucial role in pulling Madhya Pradesh out of the so-called BIMARU (a group of backward states that comprised of Bihar, Madhya Pradesh, Rajasthan and Uttar Pradesh).

Madhya Pradesh has witnessed a remarkable economic turnaround in the last over one decade. Gross State Domestic Product (GSDP) grew by 12.83 per cent between 2004-05 and 2014-15. GSDP rose by 11.08 per cent to Rs 2,38,530 crore for fiscal 2013-14, according to the Central Statistics Office (CSO) data. The impressive economic expansion has been led by agriculture sector and strongly supported by services. Agriculture sector clocked a growth of 24.99 per cent in 2013-14; 20.16 per cent in 2012-13 and 19.85 per cent in 2011-12. During these years the national average agriculture growth was in the range of 2-3 per cent. Per capita income of the State at current prices almost quadrupled Rs 54,030 in 2013-14 from Rs 15,442 in 2004-05. Although, Madhya Pradesh remains a poor state with among the lowest per capita income, expansion in the last one decade is impressive. Governance has played a critical role in this remarkable economic expansion. Per capita income of Madhya Pradesh stood at Rs 44,989 in the financial year 2012-13 against the national average of Rs 67,839.

Madhya Pradesh has witnessed extensive computerisation in administration and public service delivery system in the recent years. With a view to reduce malpractices, bring transparency and make process faster, Department of Higher Education of the State has introduced an initiative called e-Chayan under which requirement process of guest faculty in colleges have been fully automated. The system is fully transparent toward providing information of job vacancies (college wise and subject wise) and their allotment in Government colleges throughout the State. Urban Administration and Development Department has taken innovative approach in Public Private Partnership for solid waste management. The initiative is targeted to provide sustainable and affordable solid waste management services to citizens. The services include primary collection (door-to-door), secondary collection, transportation, waste to energy processing and disposal as per MSW Rules 2016, which have been formulated as per the mandate of the Supreme Court.

Bhopal Smart City Development Corporation Limited has introduced solution called Bhopal+ with an objective to make the city smart. Bhopal+ is a one-stop portal, which is an integrated web-based and mobile platform for citizen government engagement and service delivery. It seeks to implement a transforming solution for efficient and focused public service delivery, citizen consultation and redressal resulting in effective governance and ensuring quality citizen experience.

Madhya Pradesh State Election Commission has launched a campaign to ensure efficient and effective poll arrangements to facilitate the large number of voters exercise their franchise for a vibrant democracy.

The State has used technology effectively to ensure that benefits of the social welfare schemes reach to the people in a timely and in a hassle free manner. A portal Samagra (meaning ‘all inclusive’ in English) provides a common integrated digital platform for e-Governance. To redress people grievances, the State has introduced IT-based solution called Samadhan Online. Under this initiative Chief Minister interacts regularly with District Collectors through video conferencing to address the concerns of the common people. With a view to attract investments, Madhya Pradesh has set up a nodal agency called MP Trade and Investment Facilitation Corporation Limited. It provides single window clearance mechanism with a centralised helpline.