Based on the learnings of implementation of urban development schemes in the country in the past and particularly, the Jawaharlal Nehru National Urban Renewal Mission (JNNURM), a paradigm shift has been brought in our efforts to recast the country’s urban landscape. The essential features of this new approach being: bottom-up planning, based on citizen participation in prioritisation of projects and formulation of plans, complete autonomy for states and urban local bodies in appraising and approving projects, selection of cities and towns for inclusion in new urban sector schemes and allocation and release of funds based on an objective criteria, convergence of different schemes to enable integrated planning and better utilisation of resources of central and state governments and unprecedented resource empowerment of states and urban local bodies.

In addition, the central government has substantially enhanced the resource base of the states by effecting transfer of 42 per cent of divisible revenues over the next five years as 32 per cent during the last five years. Further, a huge sum of Rs 87,143 crore would be made available to urban local bodies as against only Rs 23,111 crore during the last five years. Prime Minister has taken the first step in this direction by transferring 5 per cent of the central funds directly to the local bodies. This is an example of transformative governance.

Convergence of new initiatives like the Smart City Mission, Atal Mission for Rejuvenation and Urban Transformation (AMRUT), Swachh Bharat Mission, Urban Housing Mission and Heritage City Development and Augmentation Yojana (HRIDAY) is a paradigm shift in our approach to urban development to make it more result-oriented and inclusive. In all, more than Rs 300,000 crore will be spent on the urban rejuvenation and transformation programmes during next five years.

Prime Minister has taken the first step towards strengthening urban local bodies by transferring 5 per cent of the central funds directly to them.

We have so far firmed up 98 cities under Smart City Mission, 482 towns and cities under AMRUT, 12 HRIDAY cities, besides 532 cities and towns under urban housing mission.

The broad contours of a smart city in our context as we have visualised is—necessary core infrastructure, sanitation, health and education facilities, clean and sustainable environment, good city governance and adoption of smart technologies to ensure decent living and catalyse economic growth. The areas of interventions that the Mission focuses on are:

Establishing an Efficient Urban Management System: Better data availability and analytical platforms with the help of technology to continuously track changes in city-level indicators could be a large step forward in improving the performance of urban sector programmes.

Building Adequate Capacity of Urban Institutions and Local Governments: Technology application can substantially enhance the capacity of ULBs by bridging the gaps in knowledge and skills. There is scope for enhancing the efficiency of institutions that will enable them to deliver their mandate and further the agenda of good governance.

Achieving the De-centralisation Agenda: As intended by the 74th Constitutional Amendment, there is need to create enabling environment through the creation of platforms for citizen engagement in identifying, planning and implementing city-level programmes and projects. A smart city intends to address this by adequately altering the institutionalised decision-making processes.

Minimalising Conflicts in the Urban Environment: There is an absence of framework for ensuring compatibility among sector policies, plans and regulations. Essential linkages between project identification, monitoring and evaluation of project performance and using the same in future programme formulation are also not practiced. This leads to ad-hoc decision-making, resulting in increased conflicts in urban spaces pertaining to land acquisition, energy demand and availability of natural resources such as water. A holistic decision-support platform will allow cities to be treated as spaces and as a system of systems, while minimising conflicts.

Creating Enabling Conditions for Inclusive and Equitable Urbanisation: There is need for conceptualising and evaluating urban development initiatives from a regional growth perspective. The city selection process under the Smart Cities Mission can be an effective way to address this.

Can we collectively meet the challenge and deliver the goals under Smart City Mission? Even if, we have the will to do so, do we have the inherent abilities to deliver? Can we involve the citizens in urban planning at bottom level? Can we mobilise the necessary technical and financial resources? And above all, is it doable? My answer to all this is a simple but a considered, yes!

There is a need for conceptualisation and evaluation of urban development initiatives from a regional growth perspective. The city selection process under the Smart City Mission can be an effective way to address this. 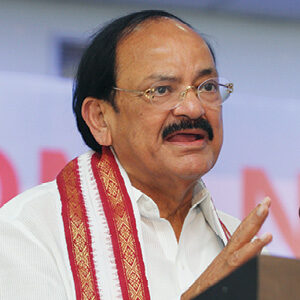 M Venkaiah Naidu is the 13th and current Vice President of India since 11 August 2017. On 5 August 2017, Naidu was elected Vice President of India with 67.89% of the votes. Naidu served as the Minister of Housing and Urban Poverty Alleviation, Urban Development and Information and Broadcasting in the Narendra Modi cabinet. A well known leader of the Bharatiya Janata Party, he has also served as its national president from 2002 to 2004. Earlier, he was the Union Cabinet Minister for Rural Development in the Atal Bihari Vajpayee government.