SKOCH Smart Governance Awards,
which were recently held in Delhi, threw up some encouraging and laudatory statistics. This year, over 300 projects were judged by distinguished and eminent jurists out of which, 229 SKOCH Order-of-Merit and 62 Awards, from amongst 26 state projects were conferred. 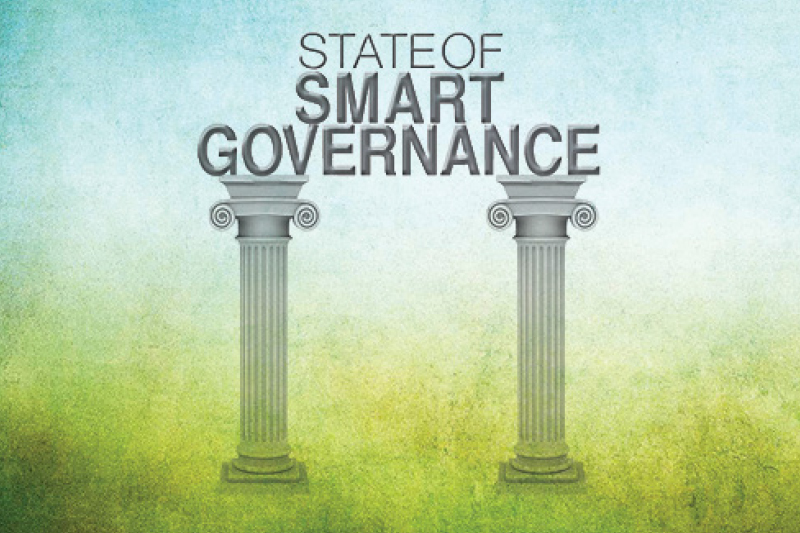 The pervasive theme this year was clearly that of ‘Maximum Governance, Minimum Government’ and the jury was happy to learn that all the states, which had sent in their nominations, stood firmly behind this talisman. The states sent in their entries under a variety of classifications. These were Health, Finance, e-Governance, Transport, Agriculture & Rural Development, Governance, Municipalities and Education.

In terms of awards and merits, the category of e-Governance bagged the highest number of SKOCH Order-of-Merit at 94, while the Governance category bagged the highest number of Awards (16). It is clear that the focus and prioritisation of the state governments and the policymakers as well as of the implementers is on the widest inclusion possible as far as governance is concerned. In the multiple examples that were studied and examined this year, the one single fact repeatedly reassuring was the very active and visible intention of all concerned to deliver and work towards best governance for the lowest of the low, be it economically, socially, in terms of education or even politically. The details of category-wise wins are given in Table 1.

The states that have performed the best in terms of rankings have been classified as ‘Stars’. These are

The next 10 states and UTs, which have done commendable work and are next in ranking, have been designated as ‘Performers’. These are:

The remaining states from where SKOCH received winning nominations are grouped as the ‘Catching-Up’. These are:

Let us take up the categories individually along with a few winners from the various states that were honoured in each category and a few representative and benchmark projects that shone at this year’s awards.

e-Governance is generally understood as the use of ICT at all level of the government in order to provide services to the citizens, interaction with business enterprises and communication and exchange of information between different agencies of the government in a speedy, convenient, efficient and transparent manner. In the awards this year, the e-Governance category had 93 total Order-of-Merit winners and 12 Awardees. Clearly, as Table 2 suggests, Kerala was the table topper with 13 Order-of-Merit and two Awards; MP with eight Merits and one Award; and, HP and Rajasthan with nine Merits each. The Kerala State IT Mission, Department of Information Technology, Government of Kerala, excelled itself through a number of diverse projects. The e-District Services project was found as particularly impactful. A few other projects by other states that are worth mentioning here are the Automated Building Approval System (ABPAS) from MP; the End-to-End Aadhaar Implementation in Himachal Pradesh; and, Online Social Security Pension System (RajSSP) by NIC in Rajasthan. Be it linking people to services, getting the poorest and the most deprived into the fold of governance, using mobile and the Internet to augment reach and transparency, the e-Governance awardees have all been driven by a mission.

The 74th Constitutional Amendment Act lays the foundation for a sustainable urban governance system in the country. The category of Municipalities is very relevant in a number of ways to the idea and the direction of a new and resurgent India. By transforming people’s lives right at the level of their day-to-day routines, the municipalities often play a critical role in influencing and effecting changes that go to the very heart of our democratic processes. Little wonder then, that this category won 36 Order-of-Merit and nine Awards (Table 3). Gujarat was at the top with eight Merits and three Awards, followed by Maharashtra with 11 Order-of-Merit and one Award and then followed the two southern states of Tamil Nadu and Karnataka, each with two Awards and two Order-of-Merit.

The municipalities of Ahmedabad, Surat, Kolkatta, Pune, Coimbatore and Belagavi all sent in their entries and the projects that they submitted were found to be impressive and effective in both the intent and the final impact. A study of the various municipal projects brought out a few factors. One, people will happily take to any development project if their safety and security is impacted. Second, a direct impact of diurnal promises immediate action. Thirdly, the greater the goal, the more support is essential from higher authorities.

The Finance category had 23 Order-of-Merit and seven Awards. The top winning states were West Bengal, MP, Haryana and Jharkhand. The importance of Finance in transformative governance can be gauged from the simple fact that over 330 million people live in India’s cities. 35 cities have a population of over a million. India’s cities are large, economically important and growing. However, neither urban infrastructure nor the level of urban public services are adequate for current needs, let alone to meet growing demands.

The projects that deserve an honourable mention are Integrated Financial Management System (IFMS) by the Finance Department and one by the Directorate of Commercial Taxes, Government of West Bengal for the e-Grievances project. The Computerisation of MP Commercial Tax Department, the e-Pension Integrated with Aadhaar-Enabled Jeevan Pramaan Patra project, Haryana and Karamchari Sewa Portal , Government of Jharkhand.

A government governs. This simple fact is lost in many societies and societal sub-groups where government is often mistaken and recognised only for control and power. Many a times, good efforts fail due to lack of trust in the lower functionaries: the people who work as interface between the government and the governed.

It is with the backdrop of disseminating inclusion benefits that the Governance category ought to be assessed. This year, there were 21 Order-of-Merit and 16 Awards in this category. The winners were the states of MP, West Bengal, Maharashtra and Gujarat (Table 5). Meghalaya, Rajasthan and Haryana tied for 4th place. The key projects that shone brightly at the award function were Integrated Social Security Programme, Participation of Women in Elections, Vatsalya Balaghat, SPARSH Abhiyaan—Special Project for Assistance, Rehabilitation and Strengthening of the Handicapped (Differently-abled), Mukhya Mantri Mahila Sashaktikaran Yojana and Tejaswini Rural Women Empowerment Programme (all from MP); Kanyashree Prakalpa and West Bengal Transgender Development Board from West Bengal; SAMVEDANA – Distribution of benefits to Maldhari tribes of Gir Forest Ness (An initiative for Tribal Community under Gatisheel Gujarat Programme) and Integrated Basin Development and Livelihood Promotion Programme (IBDLP) from Meghalaya.

Planned development of skills must be underpinned by a ‘policy’, which is both comprehensive as well as national in character. A national policy response is, therefore, needed to guide the skill development strategies and coordinated action by all stakeholders to avoid a piecemeal approach. It is also important that the policies of skill development be linked to policies in the economic, employment and social development arenas.

16 Order-of-Merit and five Awards were bagged by various states in this category. Although agriculture now accounts for only 14 per cent of Gross Domestic Product (GDP), it is still the main source of livelihood for the majority of the rural population. As such rapid growth of agriculture is critical for inclusiveness. Important structural changes are taking place within the sector and there are definite signs of improved performance with many states affording a very high priority to development in this sector.

Tripura topped this category with four Merits and two Awards. The projects that ware awarded include, Unnatisheel Gomati and Rural Housing Leading to Gender Empowerment in Gomati District in Tripura (Table 7). The other notable winners were from Jharkhand, Meghalaya and West Bengal. Jharkhand State Watershed Mission Under Rural Development Department implemented the outstanding project entitled, Use of Satellite Based Proposed Activity Map in preparation of Detailed Project Report (DPR) under IWMP projects. The Department of Planning, Government of Meghalaya’s project, Integrated Basin Development and Livelihood Promotion Programme (IBDLP) also outshone many others.

This category has 12 Order-of-Merit and four Awards. The state of West Bengal topped this category by winning two Order-of-Merit and two Awards (Table 8). It won the awards for Innovative approaches of Fair Price Medicine and Diagnostic Centres that worked in Public hospitals in West Bengal in reducing Out-of-Pocket Expenses and Critical Care Services below District hospitals in West Bengal – Quality Free Services in Public hospitals. The other states at the top of this table are Rajasthan, Arunachal Pradesh and MP as well as Gujarat.

Though there has been progress on many fronts in the healthcare segment, except for child sex ratio, the goals have not been fully met yet. Low public spending on health (1 per cent of GDP), high out-of-pocket payments (71 per cent) is leading to impoverishment of people. The major thrust in this direction is the National Rural Hearth Mission (NRHM), which aims at major qualitative improvements in standards of public health and healthcare in the rural areas through strengthening of institutions, community participation, decentralisation and innovative methods of reaching all habitations.

In the transport category, there are six Order-of-Merits and two Awards. The state with the highest rank is Karnataka, followed by UP, Haryana and Uttarakhand. Karnataka State Road Transport Corporation (KSRTC) won an Award for the project Organised Public Transport City Buses for Small & Medium Towns and Cities. The other key projects were Intelligent Transport Management System (ITMS) from UP; Haryana Tourism Corporation, Government of Haryana’s e-Tourism project and the Uttarakhand Transport Corporation Fleet Management System (UTCFMS). The transport related projects were aimed at largely improving the integration of the back-office functions and streamlining processes so that the overall transport infrastructure of the respective state could rise to a higher level of service delivery.

India has witnessed development in all the sectors of its economy. The agriculture and allied sectors employ 60 per cent of the total workforce and despite a steady decline of its share in the GDP. It plays a significant role in the socio-economic development of India. The concept of inclusive growth advocates growth to reduce poverty and other disparities, raise the level of employment, protecting environment, etc.

India’s policymakers are impelled by a desire to make the country an economic super-power. India aims to have a high growth rate with focus on equity. It is now a given that good governance is dependant not merely upon good policy advises but more importantly on the processes and incentives to design and implement good policies themselves. Any weak institutions of governance will make an adverse impact on service delivery. The projects that were reviewed for this year’s awards all had a clear sense of maximum governance and inclusion embedded in their ethos. Ranging from health to finance to e-governance, the Centre has performed remarkably well in most of the categories in the impact and quality of service delivery dimension. Small wonder then, that the centre has won a total of eight Awards and 13 SKOCH Order-of-Merit. Two Awards each have been won by the Center in the Governance, e-Governance and Agriculture & Rural Development category while it won one Award in the Finance category.