Maharashtra is the second largest state in India in terms of population and has geographical area about 3.08 lakh sq km. It has a population of 11.24 crore (Census 2011), which is 9.3 per cent of the total population of India and is highly urbanised with 45.2 per cent people residing in urban areas. Maharashtra won 25 SKOCH Order-of-Merit out of which, it has bagged four Awards. 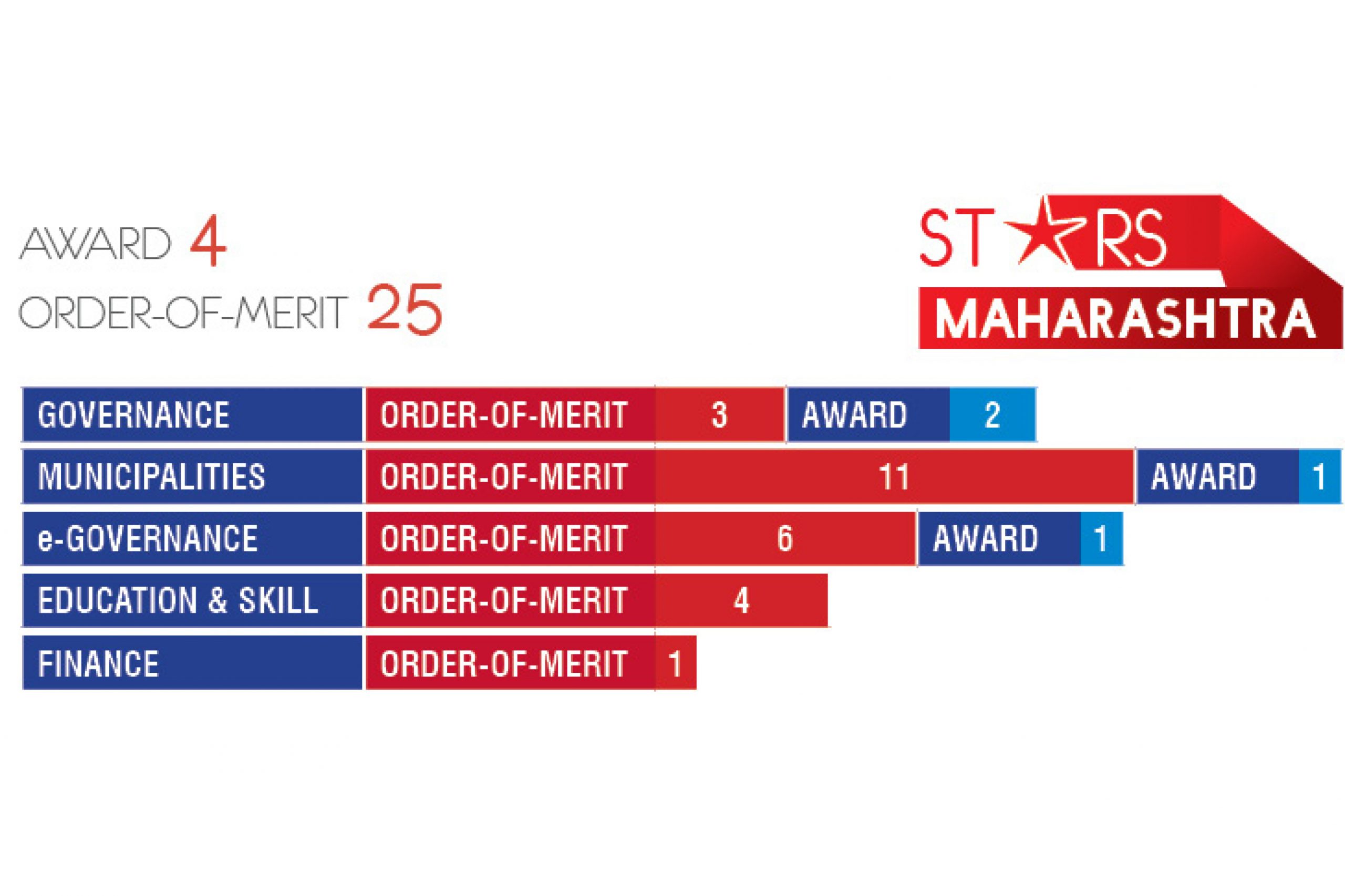 Maharashtra is the second largest state in India in terms of population and has geographical area about 3.08 lakh sq km. It has a population of 11.24 crore (Census 2011), which is 9.3 per cent of the total population of India and is highly urbanised with 45.2 per cent people residing in urban areas. Maharashtra won 25 SKOCH Order-of-Merit out of which, it has bagged four Awards. The state has bagged 11 Order-of-Merit for its outstanding work in the Municipalities sector and six merits in e-Governance, three in Governance, four in Education & Skill and one in Finance. It has consistently been ranked the best among major Indian States in World Bank’s Investment Climate Assessment surveys, especially in terms of having better infrastructure, less corruption and a relatively deregulated business environment. Maharashtra is indeed a growing economy with a growth rate of 7.1 per cent for the last decade and under the guidance of its new Chief Minister, Devendra Fadnavis, the state looks all set to reaffirm its prominence amongst all states in India.

The State has 36 districts, which are divided into six revenue divisions, viz., Konkan, Pune, Nashik, Aurangabad, Amravati and Nagpur for administrative purposes, with effective machinery for planning at the district level. For local self-governance in rural areas, there are 34 Zilla Parishads, 351 Panchayat Samitis and 27,873 Gram Panchayats. The urban areas are governed through 26 Municipal Corporations, 226 Municipal Councils, 13 Nagar Panchayats and seven Cantonment Boards.

Maharashtra has been a pioneer in the adoption of technology that improves transparency and accountability of the government. The efforts of the state have been focused on coupling technology initiatives with overall administration, aiming to take the government to the citizens’ doorsteps and usher in a digitally inclusive society. Maharashtra is the first state to have a dedicated e-governance policy. Literacy rate of the State has increased from 76.9 per cent in 2001 to 82.3 per cent in 2011. In order to boost industrial growth, the government has initiated comprehensive measures like reducing the number of approvals for business, single window investor facilitation through MAITRI (Maharashtra Industry, Trade & Investment facilitation cell), creation of e-platform for setting up of industries & new investments, repealing of the river regulation zone policy, additional FSI for industrial development in agriculture zone, etc. The state has focus on expansion of infrastructure & industrial smart cities, connectivity to industrial clusters, development of industrial parks, logistic parks, mega textile hubs, etc.

Coming to specific projects, which have stood the state in good stead and made it one of our toppers, in the Municipalities category, we have 11 projects from various areas. These include five from Pune Municipal Corporation, one from Nashik and two from Thane and four from Nanded. One of the interesting projects of the Pune MC is the fast track approval system where building approvals are now issued within 24 hours. The Express Approval System was implemented in December 2014 and 95 building proposals have been approved by Aug 2015. Another PMC project on the winner list is Automatic Scrutiny of Building Proposals-AUTODCR 2.0. PMC is the “first municipal corporation in India” to automate the Building Plan Approval Management System through AutoDCR (development control regulations, a proprietary CAD technology). This has resulted in savings of time from 45 days to 15 days and increase in efficiency from 60 per cent to 90 per cent. One of the truly impactful and pioneering projects that was submitted this year was the PMC SHWAAS Project, started in 2013, where Construction/Redesigning of community toilets was done. The purpose was to increase access to functional and well-maintained Community Toilets. The impact was on an investment of just R8.3 crore where SHWAASH Samitis in 36 slums were set up, redesigning of 46 toilet blocks and 15 ward level CLTS committees were established. Similar initiatives here, which deserve special mention are the SAMAGRA and the Women Toilet projects, both a resounding success and recognised at the Centre too.

Road Development Plan 2021 is being implemented in the state with a target to develop 336,994 km roads in Maharashtra. Focus on industrial activities along with sustainable & balanced regional growth is to drive the state.

PMC has an independent setup “Indradhanushya” to create environment awareness and promote responsible citizenship, thinking and action towards sustainable development in Pune. This provides a common platform for citizens, NGO, experts, school and colleges to discuss environment issues of the city. The Nanded Muicipal Corporation has done well with its BSUP project where with a R585.42 crore expenditure, maximum slums are covered in-situ and the social fabric is not disturbed. For this Nanded won the award for Best City for Community Mobilisation under JNNURM (BSUP & IHSDP) as a Joint Winner. The Nanded-Waghala City Municipal Corporation project Udaan iMEGA on GIS-based IT services for citizens also won the Gold Medal for e-Governance Excellence in 2014. With a view of streamlining the existing setup of Nashik Municipal Corporation (NMC) and integrating the departments to create and simplified and efficient system, NMC has implemented an ERP project at NMC. With a cost of R6 crore for the solution there is already a significant Improvement in transparency and accountability in service delivery through information sharing and real-time access to operating and financial data. The Thane Municipal Corporation Implementation of Energy Efficient & Environment friendly LED Street Lighting and its Manure from Nirmalya (Holy Flower) Project also were notable for their design, intent and achievements.

Coming to e-Governance, Maharashtra has bagged an award for eRegistration (Finance & Reforms—De-centralisation) implemented by National Informatics Centre (NIC), Pune. Public Data Entry (PDE) for Registration is web application made available to Citizen by Stamps and Registration Department of Maharashtra State. A total of 16,42,720 documents have been registered till September this year. NIC Pune has also bagged two other Order-of-Merit for its work on iSarita (e-Governance – Ease of doing business) and eSearch (Online Transaction Search and Document Download System). The Crime & Criminal Tracking Network and Systems (CCTNS), developed by CID, Maharashtra and PWC has been implemented in 502 police stations and has a total of 3,01,045 entries in it as per date. MMRDA won two Order-of-Merit for its projects Smart BKC and e-tendering.

In the category of Education & Skill development, the state bagged four merits, all for Maharashtra State Board of Technical Education, Government of Maharashtra. The various projects included Online Verification & Reassessment System, Online Academic Monitoring System, Online Enrollment and Online Examination Form Filling System and E-Marksheet System. The E-marksheet system efficiently captures the Candidate’s marks through a fully automated system that not only saves lot of time but also gives fast results. Nearly 8 lakh students are benefitted and highest level of reliability, transparency and efficiency is achieved.

For the governance category, the state bagged three merit orders, Aaple Sarkar, a Grievances Redressal project of Chief Minister’s Office (CMO), e-DISNIC (electronic District Information System of National Informatics Centre) and Election Management Module, both of the Collector Office Kolhapur. The last project has seen cost effectiveness and transparency as well as reach enhancement in the conduct of both the assembly and the parliamentary elections in Kolhapur.

Maharashtra is indeed a growing economy with a growth rate of 7.1 per cent for the last decade and under the guidance of its new Chief Minister, Devendra Fadnavis, the state looks all set to reaffirm its prominence amongst all states in India.

In the Finance category, Maharashtra bagged one order of merit for the Centre for Development of Advanced Computing (CDAC) project, Works & Accounts Management Information System (WAMIS) in the State of Odisha. This project tried to address the issues such as there being no systems in place to monitor on the ground outcomes / physical progress against financial progress, Inaccurate Department / Government Level planning mechanisms etc. The solution was back-end integration between line departments and nodal agencies so that one could reduce the burden on operations by adopting streamlined and automated processes, which promotes and enables consolidation in data collection.

Implementation of policy reforms has a critical role to play in growth acceleration. Skill development, good governance, minimising cost of performing business and ‘Big Push Development Capital’ that unleash externalities and spillover effects have to be addressed. The Growth Strategy will need to urgently tackle agriculture setback and exploit strengths of Vidarbha with greater resource flows from public and private sector accompanied with the necessary policy governance reforms. Development of major and minor ports and increased cargo as well as passenger handling along the coast would boost the tourism and its commercial potential.

There is a need for setting up institutional capacity at the state as well as more decentralised levels to collect and compile data at various levels of disaggregation (including gender, rural–urban sector, districts and regions, social groups, income groups, etc). This exercise would definitely enhance as well as enrich human development studies and debates as well as provide concrete evidence-based policy guidelines for the state. It is suggested that the district-specific policies need to be evolved in order to explore each district’s potential in enhancing its income. Further, strategies need to be evolved for better targeting of the poor by interventions such as insurance, direct cash transfers for essential health and education expenditure, etc. One important policy direction that emerges is that the distribution of resources needs to be based on existing gaps in outcome indicators rather than supply / demand based norms. For the effective provisioning of health-care and education services in the state, performance assessments of districts, which reflect the proportions of the poorest and socioeconomically disadvantaged population covered, emerges as a policy imperative.