Haryana Emerges as a Star Performer on New Initiatives

Although Haryana has an area covering just 1.3 per cent of the country, it contributes nearly 3.5 per cent to India’s GDP. There are 19 districts in Haryana and it is divided into 90 assembly constituencies depending on the population of the respective areas. 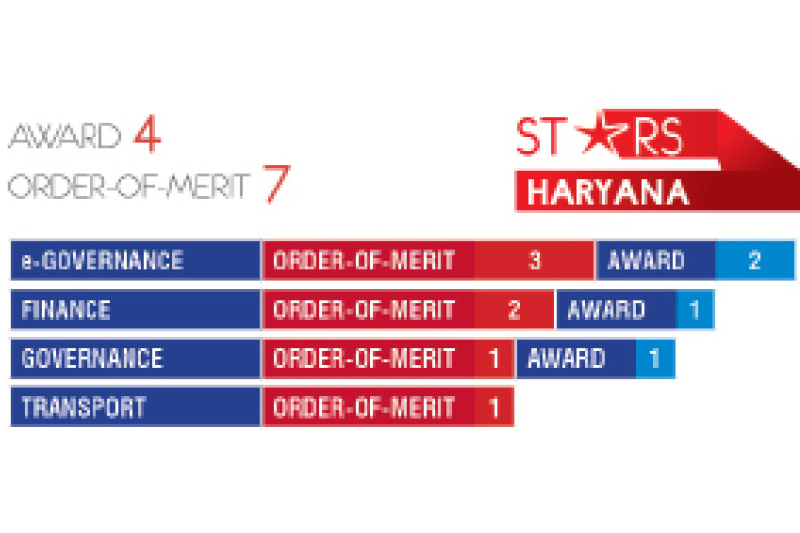 Although Haryana has an area covering just 1.3 per cent of the country, it contributes nearly 3.5 per cent to India’s GDP. There are 19 districts in Haryana and it is divided into 90 assembly constituencies depending on the population of the respective areas. It is the third-largest exporter of software and one of the preferred destinations for IT/ITeS facilities. The state is one of India’s largest automobile hubs and accounts for two thirds of passenger cars, 50 per cent of tractors and 60 per cent of motorcycles manufactured in the country. The state has also emerged as a base for the knowledge industry, including IT and biotechnology. Haryana ranks 20th in terms of area and 16th in terms of population when compared to other Indian states in the country. The state has a remarkable e-Governance turnaround for this year over the previous year and this is evidenced by the fact that the total SKOCH Order-of-Merit are for Haryana are seven and Awards are at a total of four; the state is at rank three in Finance among all at a pan-India level.

Haryana is a Star state this year by virtue of it having leapfrogged into the high-growth category of transformative governance and overtaking many of its peers while doing so.

Examining the projects in a bit more detail, let us take the category of Finance first. The Integrated Financial Management System (IFMS), which also won the coveted award for transformative governance this year, is a shining example of how responsive and responsible governance should be done. The finance department of the state has eight divisions, with more than 9,200 Drawing and Disbursing officers of around 105 state government departments that are incurring expenditure through 105 Treasuries/sub-treasuries throughout the state. As a result of the IFMS module, online communication, release, allocation, revision, re-appropriation of budget at finance department and HOD level has been implemented, central implementation of economy guidelines from time to time takes place and online preparation of salary, pension bills other bills has also been implemented. The sending data to treasury as well as automatic ways and means approval system is also now in place. The budget preparation now takes only two months as compared to eight months earlier, Budget allocation/communication now takes only 15 minutes as compared to 15 days and Quick Information Delivery is now the order of the day.

The next category, e-Governance won Haryana three Merits and two Awards. The e-District Haryana (e-Disha) project by Electronics & IT Department, won the prestigious Award. The project e-DISHA is an IT-driven electronic interface between the government and the citizens that facilitates the general public to receive effective and timely services. e-DISHA offers a wide spectrum of citizen-friendly services to save them from the hassle of running around various departments to avail different services. The objectives of this project are to make the governance transparent, thereby maximising citizen interaction with the government—improve relationships with citizens by enabling online transactions and feedback; and, reduce the cost of service delivery. In terms of benefits, the time-bound service delivery has resulted in improving the efficiency of delivery of the services, elimination of corruption and middlemen. This integration has also forced user departments to carry out process re-engineering and standardisation in delivery of services. The state government has approved the setting up of 20 District Level eDisha Centres (DLeDC), one each at District Headquarters. More than 29 lakh transactions have been recorded in the first year itself.

Haryana bagged seven SKOCH Order-of-Merit this year and won four Awards: two in e-Governance and one each in Finance and Governance categories. Haryana also has the distinction of being in top three states in Transport and Finance categories amongst all states.

In the Governance category the National Informatics Centre (NIC) Haryana implemented the CM Window Haryana – Public Grievances Redressal and Monitoring System, which won for the state the prestigious Transformative Governance Award and has been widely seen as having had the most meaningful citizen impact as far as participative governance is concerned. On the occasion of ‘Good Governance Day’ that also happens to be former Prime Minister Atal Bihari Vajpayee and Madan Mohan Malviya’s birthday, Haryana Chief Minister Manohar Lal Khattar on 25th December 2014 launched CM Window in all districts of the State “to show transparency in governance and ensure immediate redressal of people’s grievances.” This system has been designed to meet the twin objectives of minimum administration and maximum governance. The citizens of Haryana can get their complaints registered at the DC Office, Ministers’ Offices and CM Office directly. The citizen then receives a ‘Registration Number’ either personally or through an SMS. Earlier, there was no follow up and no monitoring was done for this system as the manual system of follow up and monitoring was almost impossible keeping in mind the number of such grievances which poured in and the limited staff deployed for grievances inflow handling. The problem resolving and query solving and dissemination thereof are done online which has led to the enhancement in the awareness of e-Governance skills/awareness among all concerned.

In the transport category, Haryana Tourism Corporation bagged an Order-of-Merit for its e-Tourism project. Haryana Tourism Corporation (HTC) is pioneer in Highway Tourism and operates 42 Tourist Complexes. An International Event, the Surajkund International Crafts Mela, is organised every year from 1st-15th February. Moving with times and in consonance with the changing technology, a Web portal (http://haryanatourism.gov.in) as per the W3C guidelines integrated with Online Rooms Booking System and Online e-Ticketing for Surajkund International Crafts Mela was developed to exploit the full potential of tourism in Haryana.

The state possesses huge potential in agro exports owing to its rich agricultural base. Hence, there is a lot of scope for the development of agro-based and food processing industry in the state. A diversification in the farm sector, well developed research and development system and upgrading infrastructure as per international standards should be encouraged in the state to harness the emerging opportunities. The state has observed hike in power demand over the years. The per capita consumption of electricity has also marked an increase from 700 units in 2006-07 to 1378 units in 2013-14. Hence, there is a need to harness alternative sources of energy like wind, biomass, solar energy in order to meet the growing energy requirements of the state. Going forward, MSMEs sector of the state has potential to drive growth of manufacturing sector and boost employment in the state. The state should make efforts to impart entrepreneurial skills so as to promote the growth of MSMEs in the state. Further, it is essential for the state government and industries to join hands and work in the development of the state.

Haryana has registered an excellent average annual growth rate of 8.8 per cent during the period of last eight years (2005-06 to 2012-13), higher than the 8.0 per cent growth rate of the Indian economy. Although the state has historically been known for its agrarian economy, the industrial sector has emerged as a significant contributor in the economic and social development of the state. The state offers favourable environment for attracting industrial investments through user-friendly policies and better infrastructural support. The industrial infrastructure is being strengthened in the state through development of new industrial model townships, industrial parks and expansion of the existing industrial estates. The state has huge potential in the sectors such as automobile & auto components, light engineering goods; IT & IT enabled Services (ITeS), textile and apparels and electrical and electronic goods. The state is aiming for a higher growth rate now. Hence, to achieve this, it would be imperative for the government to focus on improving quality of infrastructure, agriculture, rural development, industry, education, services sector and tourism to boost economic development in the state.

Haryana has registered an excellent average annual growth rate of 8.8 per cent during the period of last eight years (2005-06 to 2012-13), higher than the 8.0 per cent growth rate of the Indian economy.

However, the key issue now is to sustain this momentum. With growth, urbanisation has also increased manifold in Haryana. As an important contributor to the nation’s economic development, urbanisation has a direct correlation with GDP growth as increase in population density brings along avenues for economic activities. People move from rural to urban sectors to be a part of this economic transformation and look forward to employment opportunities and a better quality of life.