Microfinance has proven to be a viable business that has shown positive changes in the lives of the poor. For the sector to grow further, MFIs should be allowed to take savings deposits and regulation should allow them to become full financial services channel for the lower income groups, suggests Chandra Shekhar Ghosh 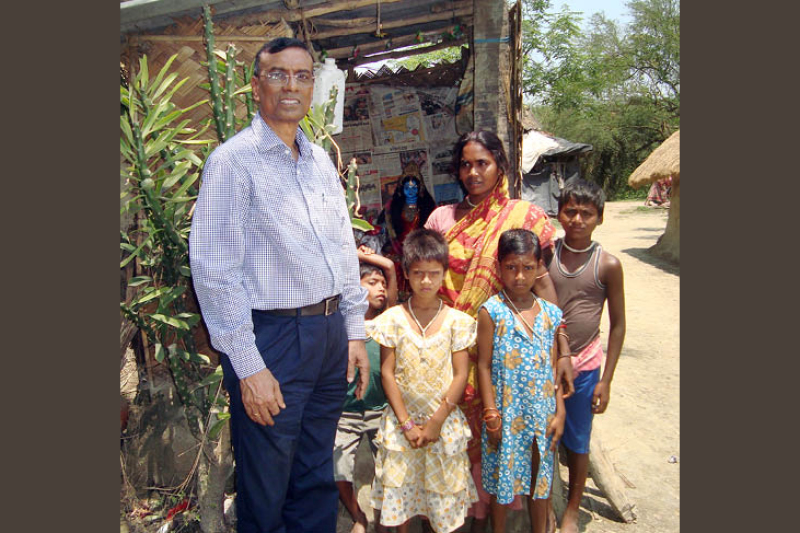 The struggle for a dignified life and against extreme poverty is still the most important challenge for mankind. 4 billion people in the world live in poverty. Despite recent improvements, around 980 million people – more than 6th of world’s population – have to survive on less than 1 dollar a day. Poverty is the reason that 77 million children do not receive any primary education. Women still have significantly fewer opportunities to pursue personal freedom and live a self-determined life than men. The list of development deficiencies is long. There is no doubt that some progress has been made towards reaching the Millennium Development Goals, but there is still a long way to go. Poverty remains a chronic condition for almost 30 per cent of India’s rural population.

More than half of India’s population lacks access to basic financial services. A striking 41 per cent of the population in India is unbanked – the percentage of unbanked populace in urban and rural spaces stands at 40 per cent and 61 per cent respectively. The scene is further worse in Eastern region, i.e., 59 per cent and in North Eastern Region where it is 63 per cent. Hard to believe, but only 14 per cent of adult population have loan accounts. There are about 203 million households in India, out of which 147 are in rural areas. 51.4 per cent of farm households (89 million) have no access to formal or informal sources of credit. The entire banking system was such that there was reluctance to serve the unbanked/underserved populace. This was due to varied reasons – high risk and cost involved, irregular income pattern, inability to offer collaterals, demand of small loans and similar other factors. It was then that the microfinance revolution happened. Indian microfinance sector has matured as an industry and is prominently placed as an effective tool to achieve financial inclusion of the poor. It has been encouraging to see lot of work being done to shape this undefined sector.

However, it is unfortunate that the sector has been sailing through tough times ever since the Andhra Pradesh ordinance in October 2010. For almost 2 years or so, it has been a tough sail for the microfinance industry. The institutions across the country felt the jolt. However, just as a coin has two sides, there were good things too that emerged from the crisis. MFIs have been accepted and recognised as extended arm of banks, which reach out to unbanked populace. RBI has recognised MFIs as a special category of non-banking finance companies (NBFC) and has issued a circular giving clear-cut guideline for the sector. As rightly said, there is always sunshine after rain – the Malegam Committee recommendations and guidelines by Reserve Bank of India (RBI) have definitely come in as breathers during the troubled times of the sector. ‘It takes both sunshine and rain to make a rainbow’ – the appointment of RBI as regulator of the sector aptly exemplifies this saying. Now with RBI regulating the sector, the confidence of all, viz., investors, PEs, VCs, banks and others is being recuperated. Tabling of the MF bill at the Parliament has been an encouraging move.

Though various institutions in the microfinance field have done considerable amount of good work, it still needs a thorough facelift in the eyes of the stakeholders and the public at large taking into consideration the tarnished image of the sector. MFIs are putting in serious efforts towards ensuring client protection practices, engaging in responsible lending and strictly maintaining the code of conduct. The emphasis on this has never been so pronounced. The credit bureau seems to have gained ground; the MFIs are regularly submitting the data and also making queries. MFIs are giving increasing attention towards striking a balance between their financial and social objectives.

It wouldn’t be wrong to say that microfinance in India has almost emerged from the AP crisis, which became a countrywide crisis, with serious international effects. In fact, they are emerging stronger, properly regulated and more able to address the needs of millions of India’s poor. The eighth issue of the MFIN MicroMeter provides an overview of the Indian Microfinance Industry as of 31 December 2013, and a comparative analysis with the corresponding quarter of previous fiscal year (Q3 FY12-13) and previous quarter of current fiscal year (Q2 FY13-14). The analysis presented in this issue is based on data collected from 43 MFIN member MFIs (NBFC MFIs) which on an aggregated basis, constitute around 85 per cent of the microfinance business in the country (excluding SHGs). This issue of the MicroMeter takes a total view of the industry without making a distinction between MFIs under CDR and the rest. This is indicative of the trend towards normalisation of operational indicators for all NBFC-MFIs including those with significant exposure in Andhra Pradesh.

Issue 08 of the MFIN MicroMeter reports the following and reflects the performance of the Indian Microfinance Industry.

As Indian microfinance evolves, we must get realistic – microfinance alone cannot eliminate poverty. Microfinance surely is a valuable and vital condition for a reasonable livelihood, but decent education, primary health care, security and the rule of law are equally important as financial services. Therefore, there is a need to adopt a credit-plus approach to bring about holistic development of the deprived section of the community.

As far as microfinance tomorrow is concerned, there is still a huge population to be serviced. Ours is a country where almost half of the population is unbanked, only 9 per cent have credit accounts with banks. The distance between bankers and the poor is not only physical; it is social, in class, caste and gender. The existing institutions need new channels through which they can cover the ‘last mile’ between themselves and the un-banked masses.

There is great demand and microfinance can help bring relief and economic opportunity to the poor. The industry needs a nation-wide supportive policy framework to be put in place to promote, finance and regulate microfinance. Taking into consideration the recent crisis, the sector may witness certain mergers and acquisitions, with major consolidation waiting to happen in the years to come. Self-regulation seems to be the buzzword now. Self-regulation will work if it is based on a delegated-power model or, to be simple, if Self-Regulatory Organisations (SROs) are recognised by the RBI. Already, code of conduct is being enforced among the MFIs, including lending based on credit bureau data. Surely, there will be far more adherence in the days to come.

Like other countries, MFIs should be allowed to take savings deposits, with due safeguards, and also permitted to sell insurance, mutual funds, pensions and so on.

Regulation should enable MFIs to become composite financial service channels for the lower income groups so that they can reap economies of scope and keep costs under control. The final step would be to allow the better-run MFIs to become microfinance banks, thereby integrating the lower-end of the financial system with the upper-end. Those MFIs with good track record in both social and financial terms should not be treated like run-of-the mill NBFCs. Rather, major MFIs with equity capital of over Rs 3 billion (the benchmark for new banks) should be allowed to accept deposits. This will immediately improve financial inclusion. And some deposit-taking MFIs may evolve into full banks. That may be a way to go. Acquiring the status of a bank will allow MFIs to accept deposits thereby reducing their cost of funds to a great extent. Instead of borrowing from banks at 12-14 per cent, they can gather deposits at 3-6 per cent. This will also help their clients, who want savings avenues. So the lending rates will be lowered and savings outlets will be provided to poor villagers.

It has been proven that the microfinance model is financially and socially viable, therefore we now see some private banks coming forward to lend to the poor. It is now time for the microfinance institutions to scale up. In order to reach out to more unreached, adequate fund flow is essential. Increased microfinance intervention shall open up investment opportunities, help generate employment, reduce poverty, make significant contribution towards GDP of the country and help in financial inclusion of those excluded so far. The sector needs professionals who are willing to pursue a career in microfinance industry. Reputed institutes, viz., IIM and the like should formally introduce microfinance as a subject.

The sector should be determined to passionately put in all the hard work and pledge to make honest attempts to empower poor people to make significant and long lasting improvements in their lives and communities. We need to unceasingly develop in order to meaningfully intercede to better the lives of the unprivileged. We look forward to the future with excitement and optimism and could not be more excited about the journey ahead.