What China did in 1978, we did in 1991 and both have travelled a long distance since then. China, at $10 trillion today stands as second largest economy while India is at $2 trillion aspiring to be $20 trillion by 2025. The path pursued by both the economies has been the same—reforms. So, there is no question on whether or not we need reforms.

About a decade and a half ago, I was confronted with the question—what is reform? During my time as Minister of Power, we wanted to open up the power sector. Some said, no need! I remember having had intense dialogues with the most militant trade unions in West Bengal. The opinion was totally divided. I told them that the power sector is starving and soon you shall too. Forget pensions, even the salaries are threatened. The only hope is reforms, I said.

The beginning of the process of reform has to be based on a detailed analysis of the situation, which today is nearly as bad as it was in 1991. China started reforms in the face of a closed economy, unrest, poor industrial activity and food insecurity. So, when there is no way out, the only recourse is reforms. Fortunately, for us the situation was not so bad.

We have made progress but a lot more needs to be done. Rather than comparing notes with others we actually need to evaluate our own performance and see where we are. Reforms must benefit the target groups, whether tribals, poor, farmers or the deprived. At the same time, we have to ensure that changes happen at the macro level as well.

If you talk about reforms, can you have a complete detailed agenda of reform—something that people want or demand? The challenge faced here is, you try to detail too much, which ends up creating too many opponents to it. The other way is, have a clear-cut roadmap wherein not necessarily everything has to be spelt out in detail. China faced the same dilemma.

I remember, Deng Xiaoping was asked the same question in the party congress, he said when you are at the river, focus on crossing the river rather than making a detailed roadmap. This is exactly what we need to do. Sometimes play by the ear; sometime feel the ground; and, some other time go by your instinct but always ensure to bring all the stakeholders together. This is how we succeeded in getting the power sector reforms rolling, as we talked to unions, farmers’ organisations and everyone else.

I recall, when we were having the discussion on the Electricity Act. We have already had several rounds on the matter, which involved top trade union leaders and other stakeholders. At the end, they said, we will agree to all your conditions, provided you agree to one of our’s. I said, go ahead. The condition is that you will not call us again for any more discussion, pat came the reply. The law got passed subsequently that resulted in creating a huge capacity in power sector, which is unprecedented in a situation that was wrought by power deficit.

If today, we have become power surplus, it is the fruit of the reforms process. We need to repeat it in many areas: rural development, railways, health and so on. In Railways, we have started with delegation of powers, not a single rupee tender has come to me yet and it will never come as long as I am a Minister.

Decision-making powers have been delegated down to the functional level and at the same time the functionaries are being given Key Result Areas (KRAs). We have started doing something like giving autonomy to the zones, by signing MoUs with them – this is what you need to do, these are the parameters and you would be accountable for certain outcomes.

The beginning of the process of reform has to be based on a detailed analysis of the situation, which today is nearly as bad as it was in 1991. China started reforms in the face of a closed economy, unrest, poor industrial activity and food insecurity. So, when there is no way out, the only recourse is reforms.

The biggest thing was that we identified the root cause of the problem. We discovered that the true problem was actually under-investment in Indian Railways. Railways as an organisation is always dependent on support that it gets from the Ministry of Finance. What has happened over the years is that the right amount of infrastructure that needed to be built, did not get built. Just to give you an example, Chinese used to spend around 1.5 per cent of GDP on railway infrastructure and India, about 0.2 per cent. I am not even saying the gap between the two GDPs. So that is the gap we had in our railway infrastructure. So, we said that all these problems—like trains running late, stations being congested, the stagnated revenues, etc—were happening because we have not invested much in infrastructure. And the reason for not investing was that there were no funds available. For the first time the Indian Railways went out and sought funds from the market.

LIC was looking to balance its portfolio and we were looking for exactly the same. We got a R1.5 lakh crore loan from LIC at very attractive rates. Now we are trying to find sources from World Bank and other multilateral agencies. Now we have the money to spend. The second major change, pertains to the managerial bandwidth. What we said, let’s spend money with actual partnerships with the private sector and state governments. For that, the railways should increase its capacity, which can only be achieved if it has enough bandwidth. So, our ministry went and sought partnerships with the states. For the first time, the cabinet approved that the railways could actually sign joint ventures with state governments to build railway infrastructure in states.

Now the railways can form a joint venture company with states and they could decide where they want to invest the money. Some of the new lines were not remunerative; they were in fact loss making. But when you make the states your partner, they can make that whole process profitable by exploring full potential of the project. The next thing that happened in terms of reform, which has probably gone through rather silently but which is very effective, was that of process enablement. For example, the government for the first time delegated power to Board Members who, in turn, delegated powers to General Managers and further down to the DRMs. We cut the tender cycle time of a project from conceptualisation to design. We moved all procurement through e-Tendering. We shifted the authoritarian responsibilities to the functional level. People who are in the field are entitled and trusted to make the right decision. To give you an example, a project that took 500 days for approval last year, took only 88 days this year. Railway Board files don’t come to the Minister anymore. So, the process time gets cut. It’s an important tenet of capacity building and reforms. A lot of transparency was brought into the system, which has helped in improving the ease-of-doing business with the Indian Railways.

The last 25-years have shown us the way and we must evaluate our achievements along with failures and decide on the future course of action.

(Suresh Prabhu is Railway Minister. The views and opinions expressed in this article are personal and do not reflect the views of INCLUSION.) 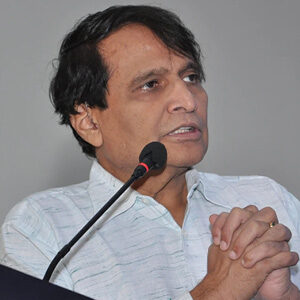 Suresh Prabhu was a chartered accountant, who worked up the financial sector totem pole and served as the Chair of several banks until he decided to plunge into politics in 1996. He was elected to 11th Lok Sabha from Rajapur Constituency in Madhya Pradesh which segued into a stint serving as a Union minister in Atal Bihari Vajpayee's administration from 1998-2004. He served as the MP of Rajapur for four terms as a Shiv Sena candidate. In 2014, he decided to sever his ties with Shiv Sena and pledged his loyalty to the BJP and was subsequently appointed the Member of Rajya Sabha. He's serving his second term as the Member of Rajya Sabha and is the Union Minister of Civil Aviation under the Narendra Modi's administration.