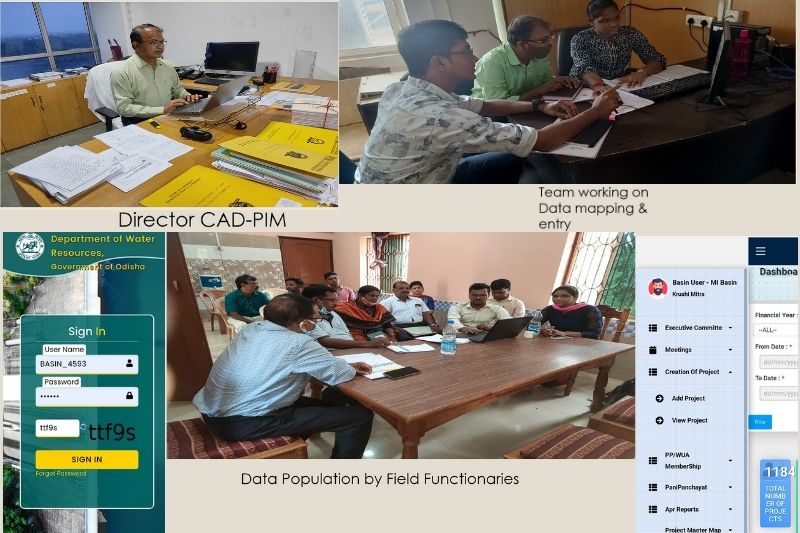 The application embeds the status of the functionality of Pani Panchayats, relating to verticals such as major, medium, minor, and lift irrigation projects; constitution of bodies such as the executive committee of the Pani Panchayats; distributary committee; project committee, etc. Such bodies are strategic to decision-making in water governance in conjunction with equity and inclusion, at various levels to make water governance participatory.

Many PPs (Pani Panchayats) were dysfunctional since elections couldn’t be conducted during covid. Manually sourced data was slow and unvalidated while no real-time data to track the functionality of PPs (Pani Panchayats) led to impeded decision-making and allocation of resources at O&M/GIA. Apart from data not being gender-segregated, the participation of women in decision-making was not quantified. The democratic disposition of grassroot farmers’ bodies in PIM was not assessed. Also, data was not aligned with revenue boundaries, thus preventing sourcing funds from MGNREGS.

The Government of Odisha has built a robust application that can handle large volumes of data simultaneously accessible by different users at a particular time, it has been identified to come up with a solution that facilitates end-to-end data verification process as well as entering data as per the water resources department objectives. eCAD (Pani Panchayat MIS) is a web portal that will be addressing the digital transformation of the water resources department of the government of Odisha. The application package is to manage the complete data entry and verification process of Pani Panchayat data.

A comprehensive database of all the PPs on a digital platform is now available which has enabled the real-time tracking of elections and the functionality of PPs. Furthermore, monitoring the constitution of higher bodies and their functioning is now possible. The project has also enabled the participation of women in water governance and decision-making. The implementation of this digital intervention has made sure the data from the lower level up to the highest level flows seamlessly in the system which will help the relevant stakeholders to make swift decisions.

The department faced challenges with mapping the projects, basins, circles, divisions, sub-divisions, and sections. Also, embedding complex processes and data in a simplified application was difficult. The department also undertook the capacity building of functionaries across levels and verticals which was a difficult task as most people had difficulty adopting it.

For the first time, the functionality and activities of the Pani Panchayats are conceived to be tracked online. Keeping an eye on data security, this system is integrated with updated security features like session timeout, cross-site request forgery, audit trail of the user login history, etc. Also, to provide transparency, the solution has holistically facilitated a view of data enabling the escalation matrix to track real-time updates. The project facilitated a single-window portal to automate CAD & WM. Apart from developing an interactive analytical dashboard for real-time monitoring, the department also integrated a grievance platform and ERP for better results.

Since water is getting scarcer by the day, having a platform such as eCAD has helped the department to decide on the kind of capacity building for the stakeholders, majorly farmers in the area. The department achieved its goals of efficient water use, productive agricultural practices with minimal use of water, dispute resolution in water sharing, and adoption of modern techniques and technologies for maximizing productivity.

The water resources department of Odisha implemented this innovative approach to provide irrigation facilities across Odisha which will be valuable for all the beneficiaries involved and subsequently increase the Odisha agricultural economy.

The aim was to digitize all the legend data for effective management and audit which has enabled the department administrator to take swift action on the programs and projects envisioned by the state for the betterment of irrigation facilities across Odisha.